The Sensory Side of Craft Beer Pairing

Through trial and error in the last seven years, I’ve put together a graphic to chew on (pun intended) that I call my Craft Beer Characteristics Chart. To me, this not only provides pairing terms, but helps visually unscramble the web of interactions and flavors that happen when paring craft beer and food.

Now to many, the characteristics chart (below) might look like an information graphic gone spider ballistic, but bear with me while I explain. When approaching pairing, I’ve found the most success by first getting a true understanding of all the characteristics (taste elements, flavors, intensity and sensations) of the craft beer I plan to pair with.

By accounting for each of these four characteristics in a craft beer, I have the best chance to dial in on what might harmonize or clash with the food I’m pairing to. Said another way, think of craft beer as an ingredient and use the characteristics chart as a road map to identify what elements are present. This gives you a better chance of identifying how a specific craft beer might interact with different foods. 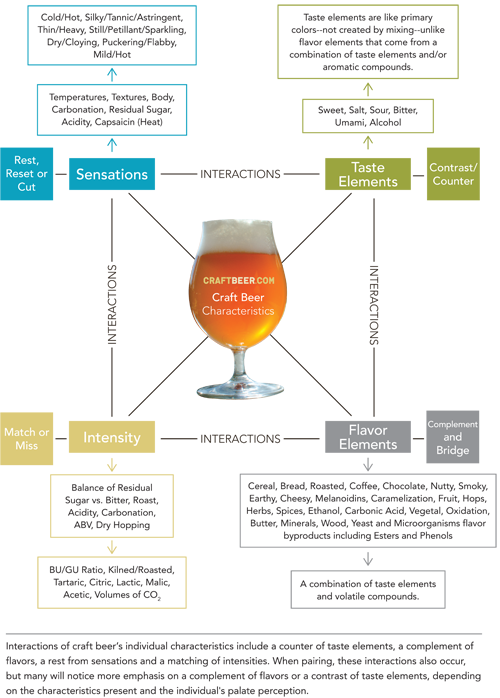 Look for flavor bridges, where the flavors of craft beer can bridge to the flavors in a food dish. This helps create harmonies, home runs and the complementing interactions we all enjoy.

Below you’ll find examples of flavor groups. Look for commonalities within a group, as they will be helpful in choosing pairings. Example: a porter with hints of vanilla and chocolate can complement a brown sugar caramel cake.

This list represents a tiny sampling of common flavor groups, offering a suggested pairing to help make the connections.

Craft beer and food pairings are most successful when the intensity of the beer matches that of the dish. You don’t want the craft beer to outweigh the food and vice versa.

Sensations cause rests or palate resets and can even calm/cut through food’s oils, creams and fats.

The Sensory Side of Craft Beer Pairing was last modified: August 24th, 2016 by Julia Herz