While the saying sells t-shirts, it’s not far from the truth: “My other beer is coffee.” Many in the world of craft beer seek out the artisans of coffee who show the same amount of love to coffee that craft brewers pay to craft beer. As these brewers develop a love and appreciation for craft roasters, some brewers have found ways to utilize a roaster’s skill and attention to detail to elevate the brewery and its offerings. 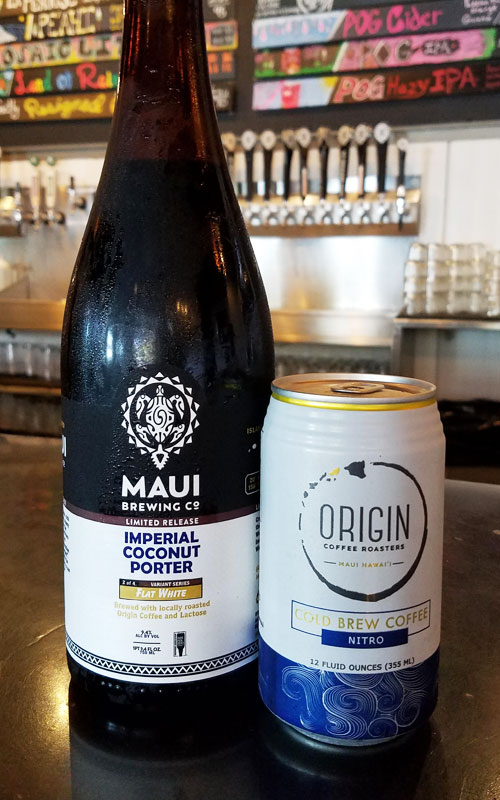 The magic between Maui Brewing Company and Origin Coffee Company began in 2012 with a post Craft Brewers Conference meeting between Maui Brewing founder Garrett Marrero and roastmaster Heather Brisson-Lutz. Heather invited Garrett to visit her roastery to “experience specialty coffee on a more raw level.” After Garrett left, the two remained friends and returned to California and Hawaii and continued to talk about coffee.

“I’ve always loved good coffee,” says Garrett. “I had never looked at coffee in quite that detail. I didn’t have the knowledge of coffee that I have now. I love good beer, I love good whiskey, I love good coffee, I just didn’t know that much about coffee.” Something about the way the cupping elevated the taste of the coffee remained with Garrett. “That cupping blew my mind to how much coffee could change based on the process, something like the temperature that you bloom the coffee could have such an effect. Then knowing there wasn’t a good cold brew in Hawaii that was made at any scale, we saw that as an opportunity to create Origin for distribution throughout Hawaii.”

Fast forward to 2016 when Garrett offered Heather’s wife Kim a job as head brewer at Maui Brewing. Garrett and Heather then began to talk about the leaps and bounds that canned cold brew coffee had made in the coffee market and took this opportunity to create a business that realized the canned cold brew Heather and Garrett had talked about.

(Related: The Mad Scientist Behind Dozens of Medal-Winning Coffee Beers)

“When you look at all of the things we do together and Maui Brewing is essentially a contract packager for Origin where we are canning the cold brew coffee on our filling line in order to supply that product to Origin,” says Garrett.

Origin coffee’s blend became Liquid Sunshine a mix of coffees designed to get the best flavor into the cold brew, and the coffee is more than just beans to Origin. “Heather has some great connections to many of these farms in Nicaragua, El Salvador, Costa Rica, and places that are growing amazing coffee all over the world,” says Garrett. “Getting quality coffee direct from the grower, then we have that relationship that helps to develop. Then we can talk about a farm as opposed to a broker.”

Maui and Origin’s collaboration on beer dates back four or five years. In that time, the meeting of the minds between Heather, Kim, and Garrett has produced such beers as Grandma’s Coffee Cake Imperial Porter and Flat White Imperial Coconut Porter. “We were lucky having Kim as a resource to commission our brewhouse,” says Heather. “She still assists on our brew to this day.”

Beyond coffee collaboration, Heather is also starting to work with Maui Brewing’s distilling company, Kupu Sprits, to develop coffee liqueurs and different types of distilled beverages that utilize coffee, “potentially even a coffee cocktail in a can.”

As the word spreads about Origin, distribution of the beverage has grown from one island to many.  Origin’s distribution started out on Maui only, and now stretches throughout Oahu and neighboring islands.

One thing I often forget outside of Maui Brewing is that everything made in this building is produced with solar energy. Obviously the roaster uses propane, but any electrical use in the roastery is the same electricity the brewery uses and we are one of the most sustainable buildings because we have a 1.2 megawatts of solar and batteries and biodiesel generators. Being made here at Maui Brewing allows that coffee to be made with sustainable energy.

For San Diego’s Modern Times Beer Company, roasting coffee dates back almost to the birth of the brewery, says Coffee Program Manager Tessie Warnecke. “Jacob McKean (our CEO/Founder) decided that one of our initial core offerings would be a coffee oatmeal stout,” remembers Tessie. “This would become Black House Coffee Stout, and the coffee used in the recipe was (and is) all roasted in-house, giving us a lot more control over the profile & consistency of the coffee used in the beer.” The brewery’s growth foreshadowed and echoed the growth of the coffee business – “Modern Times Coffee as a standalone division was not in the original business plan; it grew organically.”

Modern Times Coffee has been led by Tessie Warnecke since September of 2020.  Prior to that, she “has been the Green Coffee Buyer and focused my attention on development of new products, as well as coffee education for staff and customers.”  Tessie has seen Modern Times Coffee grow from humble roots, sourcing the coffee to be roasted 2 lbs at a time in one beer of Modern Times’s core lineup to its current state. Tessie recalls, “We didn’t sell an actual bag of the coffee itself until the year after the official opening of MT—all coffee that was roasted up until that point was for beer or cold brew on draft.”  Modern Times’s current equipment investment in coffee “allowed us to really focus on the business of coffee, including launching our cold brew in cans. 7 years later, we’re roasting over 100,000 lbs of coffee a year (which is a lot for a small operation like us!).”

One of the offspring of Modern Times Coffee’s curiosity has been the proliferation of different blends of spirit barrel-aged coffee, that is coffee beans that have been rested inside spirits barrels to pick up the flavor and aroma of spirits like bourbon and brandy, for starters. But Tessie has discovered that while barrel-aged coffee is popular, one of the biggest challenges is a lack of reference materials. “There are no articles, references, or masters in this realm, which has made it one of the most exciting, educational, experimental, and all around beastly of product lines.” Tessie says that the way forward lies in experimentation and fascination with the potential new flavors that the team can discover. “We do quite a bit of sensory and quality tests, and we are always trying new processes to see how we can get the best results from the barrel aging process. Constantly asking questions on the amount of time in barrels, the type of barrels, how the moisture content and density is affected, what that means to roast profiles, which coffees work the best in which barrels, how temperature impacts the results.” 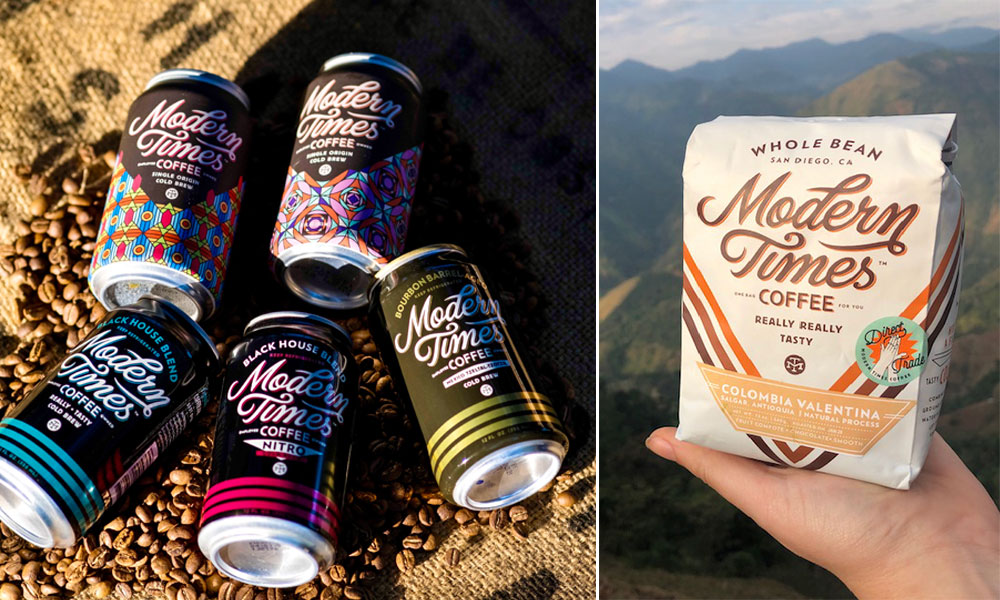 While both the brewery and the roastery release their own products, so many positives come from the collaboration between Modern Times Coffee and Modern Times Beer. Tessie describes the interplay between the two operations as “wonderful to see professionals from two very different industries able to talk shop and discuss flavors—even though the products are very different. If you “taste” for a living, you have the ability to calibrate your palettes much easier than the average person. This is a tremendous advantage that allows the collaboration process to work, not seamlessly, but with enthusiasm and passion from everyone involved.”

At their core, all coffee programs evolved from a shared love of coffee and beer, but at Massachusetts’s Tree House Brewing Company, the thought of adding a coffee roaster was the result of the brewery’s desire to make their coffee beer the best it could be.

Tree House Co-Founder and Head Brewer Nathan Lanier says that roasting coffee was “something I wanted to do since we began our coffee beer program in 2014, but the program took flight when the brewery worked on their “Shot Series” of beers. Each beer is named for a coffee order (Single Shot, Double Shot, Triple Shot, etc.), and Nathan says that his love of Double Shot Coffee Stout and his desire “to have the ultimate control [of the beer] through roasting was something we just needed to do. Internally, we try to outsource as little as possible because we think it contributes to a better end product.”

As Tree House Coffee evolved, so too did the Shot Series and Tree House Brewery’s use of coffee.  Nathan says that Tree House’s “beers have benefitted from the addition of coffee, and we literally have dozens at this point, but our “Shot” series all use custom roasted blends to best meld with the base beer.”

Nathan also says that the synergy between Tree House Coffee and Tree House Brewery goes beyond collaboration at this point. Nathan and Coffee Program Manager Adam Bonaccorsi have wholly integrated the programs at Tree House. “The production staff on the beer side work directly with Adam and his team every day. There is a very tangible desire to relentlessly improve our offerings, and with the capability to sample roast, roast, and dissect our beans in house, this happens constantly,” Nathan stresses.

Ultimately, for Nathan and the staff of Tree House Brewing and Tree House Coffee, the energy that pushes both operations forward comes from the drive toward sustainability and the people involved.

“The leaders in the industry are doing tremendous things working directly with farmers to ensure they can comfortably subsist within an ecosystem that conspires to drive prices down. Coffee folks are amazingly passionate about what they do, why they do it, and what results from their work. It’s infectious and exciting to be a part of.

One of our biggest accomplishments this year was our first Direct Trade relationship. To meet the farmers who grow the beans we roast, and to develop a relationship with them, makes the cup more fulfilling in the end.”