Boulder, CO • September 15, 2014—Now more than ever, bars across the U.S. showcase the wide array of offerings from the more than 3,000 breweries in operation throughout the country today. To help navigate the nation for some of the best places to imbibe, CraftBeer.com—the Brewers Association (BA) website for beer lovers—surveyed its audience for its annual list of Great American Beer Bars.

More than 19,000 craft beer fans cast over 3,400 nominations for better beer bars this year. Once nominations were collected, the field was then narrowed to the 10 most-nominated bars in each of the five regions of the country. The top five craft beer establishments from each region, as well as the overall winners from each, have been recognized. 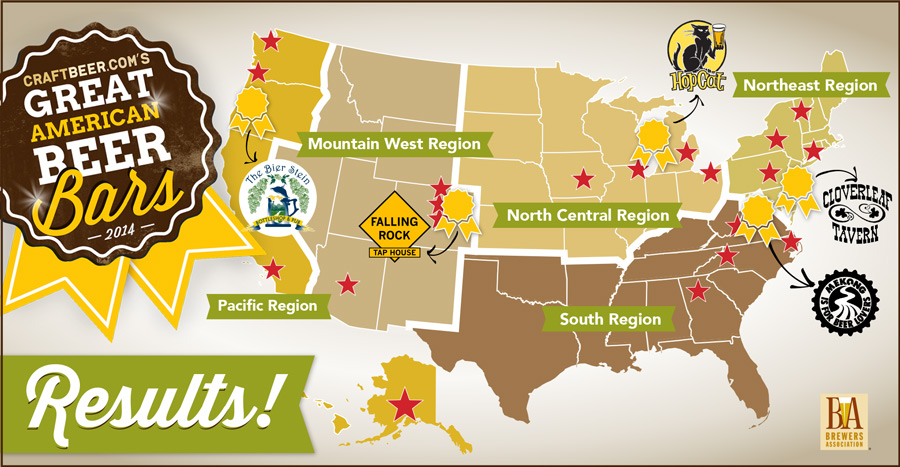 Download a high res PDF version of this map.

“This year’s Great American Beer Bars competition truly shows the advancement and popularity of craft beer throughout the country,” said Julia Herz, publisher of CraftBeer.com and craft beer program director of the Brewers Association. “Each region has so many dedicated beer bars, which lead to our decision to honor the top five establishments of each. Their hard work and commitment has helped shape and advance the craft beer culture in our country—and that is something to toast and celebrate.”

Please see below for a selection of descriptions and quotes from the overall winners:

The Bier Stein | Eugene, OR

Since 2005, The Bier Stein has been serving the best in craft brewed beer to the patrons of the Pacific Northwest. The establishment serves over 1,000 different craft beers in bottles and cans and always has 30 rotating beers on draft. The Bier Stein establishment also has a monthly food and beer pairing menu that uses fresh local ingredients from local farmers and pairs with the seasonal beer style of the month.

“We are honored and super excited to be recognized by the craft beer-loving public as one of America’s best craft beer bars,” said Chip Hardy, owner of The Bier Stein. “Being recognized means we are doing something great here in our local beer community. Offering many craft beer choices, craft beer education, and having an awesome knowledgeable and friendly staff has made The Bier Stein a great American craft beer bar!”

Nestled amidst the hustle and bustle of Bloomfield Avenue in New Jersey lies the Cloverleaf Tavern, currently the oldest business in Caldwell, as it was founded in 1933. Glancing through the bar area, it’s easy to become lost among the beers on tap and the selection of over 65 bottled beers.

“A great craft beer bar is only as good as its great craft beer customer base. We put pride and hard work not only in providing a great variety of craft beer, but educating guests on craft beer as well,” said Ryan Dorchak, general manager/operating partner of Cloverleaf Tavern. “This is a great honor and we send a warm thank you to all those who helped us achieve this success: our guests, staff and supporters.”

Specializing in draft beers from more accessible craft selections to the high-IBU palate smashers, to the exotic rarities from across the globe, Colorado’s Falling Rock is the epicenter of craft beer all year long and especially during the annual Great American Beer Festival®.

“My brothers Steve, Al and I built our own favorite place to hang out and we built it for brewers and enthusiasts to enjoy.” said Chris Black, king at Falling Rock Tap House. “We created a place where brewers can showcase the beers they are proudest of.”

HopCat opened its Grand Rapids location in January 2008, and ever since has been on an unending quest to ensure that they have the best beer selection in the world. Hop Cat boasts 48 beers on tap at all times, about half of which are locally produced Michigan craft beers.

“This recognition means so much to HopCat because it comes as a result of support from our customers and the readers of CraftBeer.com, who love craft beer as much as we do,” said Mark Sellers, founder/owner of HopCat. “The award also recognizes the passion of the team at HopCat to create a world-class craft beer bar.”

Established in 1995, Mekong Restaurant has a 50+ tap selection and over 200 bottle offerings. This year marks Mekong Restaurant’s third time as a winner in the Great American Beer Bars search.

“Craft beer is a big family and I’m blessed to be a part of it,” said An Bui, beer director of Mekong Restaurant. “We continue to grow, share, support and educate each other through breweries, distributions, beer bars, retailers and more.”

Methodology: CraftBeer.com asked readers to help choose the winners for the annual Great American Beer Bars List. Readers were asked to nominate their favorite craft beer bars in the country; one bar from each of the five designated regions. Craft beer fans cast more than 3,400 nominations, which were narrowed down to the 10 most-nominated bars in each of these five regions. Over 19,000 votes were cast in total. Voting was conducted from August 15 to September 5.

The Brewers Association is the not-for-profit trade association dedicated to small and independent American brewers, their beers and the community of brewing enthusiasts. The Brewers Association (BA) represents more than 70 percent of the brewing industry, and its members make more than 99 percent of the beer brewed in the U.S. The BA organizes events including the World Beer Cup®, Great American Beer Festival®, Craft Brewers Conference & BrewExpo America®, SAVOR℠: An American Craft Beer & Food Experience and American Craft Beer Week®. The BA publishes The New Brewer magazine and its Brewers Publications division is the largest publisher of contemporary and relevant brewing literature for today’s craft brewers and homebrewers. Beer lovers are invited to learn more about the dynamic world of craft beer at CraftBeer.com and about homebrewing via the BA’s American Homebrewers Association. Follow us on Twitter.