3 Tips for Pairing Beer and Chocolate

For a few years, I have been working with Sarah Amorese, proprietor and chocolatier at Piece, Love & Chocolate in Boulder, Colorado, conducting craft beer and chocolate pairing classes at various breweries in our area.

Pairing beer and chocolate in and of itself is not necessarily a new idea, but what Sarah and I have discovered is that both beer and chocolate are very versatile foods. Each on its own can complement a wide range of flavor characters, yielding endless opportunities for interesting matches across the flavor spectrum.

Pairing with Beer vs. Wine

The idea of pairing beer and chocolate has really been gaining popularity over the last decade or so. Prior to that, wine was the popular choice to accompany dessert and chocolate.

However, she finds pairing wine with “straight-up bar chocolate” is tricky at best. The tannins in many wines are not well suited to chocolate. The flavors provide interesting, though not necessarily pleasurable, contrasts on the palate.

When Sarah and I started developing beer and chocolate pairings, we had to first learn about each other’s products. I had to teach Sarah about the raw materials used in beer, and the sensory experience of consuming beer, explaining the different flavors and aromas and their origins.

At the same time, Sarah had to teach me about the chocolate fermentation process, the raw cocoa pods, the richness of cocoa butter and the difference between dark, milk and white chocolates.

I like to say that I thought I loved chocolate, but when I walked into Piece, Love & Chocolate for the first time, I learned that I didn’t know what chocolate really was. What a revelation! Through all of our research, we have discovered that beer and chocolate can not only be paired on the basis of flavor, but also on mouthfeel, or as Sarah calls it, “the feel of taste.”

In an overly simplified nutshell, chocolate and beer work so well together because of the interaction between its richness and beer’s carbonation. The rich, fatty feel of the cocoa butter melts at body temperature and coats the palate, and the lively bite of carbonation activates the trigeminal nerve, creating a round and full flavor and feel experience. 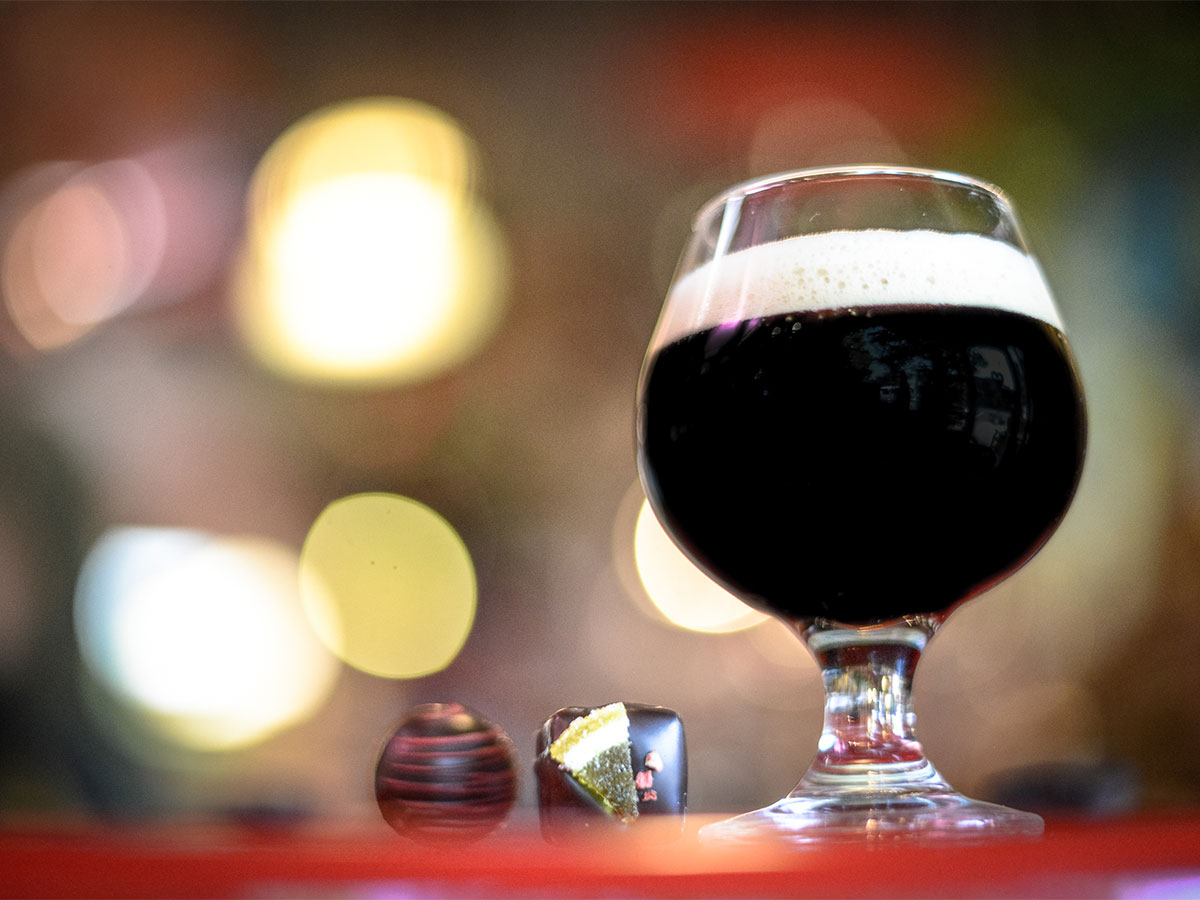 Tips for Pairing Beer and Chocolate

Certain styles of beer do not naturally lend themselves to pairing with chocolate. Generally more moderately alcoholic, lighter-bodied sessionable styles, such as pilsners, pale ales and ESBs do not hold up well to rich, fatty cocoa butter. We even found this to be true with a mild milk chocolate.

There have been a few notable exceptions. We have had great success pairing hefeweizens with a chocolate crust lemon custard tart and a lavender chocolate cake. In both cases, the chocolate component acted as a maid of honor to the pairing of the fruit/spice characters of the beer and the desserts.

2. Don’t Be Afraid to Try an Exception

We also found the Left Hand Brewing Co.’s Good Juju Ginger Ale to be an excellent candidate for pairing with chocolate desserts. Ginger and chocolate are already known to pair well together from a flavor standpoint, but could this lighter-bodied spiced ale stand up to the richness of a chocolate dessert?

Sarah and I randomly chose to try the beer with her Honey Lemon Tart, a honey gelee topping white chocolate mousse and a light lemon custard. The snappy ginger spice worked beautifully with both the sweet of the honey and white chocolate, as well as the tart of the lemon custard. The ginger character also helped offset the heft of the cocoa butter.

IPAs continue to be a challenge for pairing with Sarah’s chocolate treats. The intense hop bitterness of most of these beers often creates a real clash of flavors, making it difficult to find a truly pleasurable pairing. I think the right IPA is out there, one with enough malt flavor and body that will not be dwarfed by the hops — I just haven’t found it yet.

As one might expect, bigger, richer and maltier beers seem to pair best with chocolate: porters, stouts, barley wines, sours and barrel-aged styles. Higher alcohol beers tend to stand up to the cocoa butter better, while the malt sweetness of these bigger styles often offers a nice compliment to the sweetness of chocolate. These styles of beer also tend to blend well with other flavors — from wood, coffee or other added ingredients— much like chocolate does. 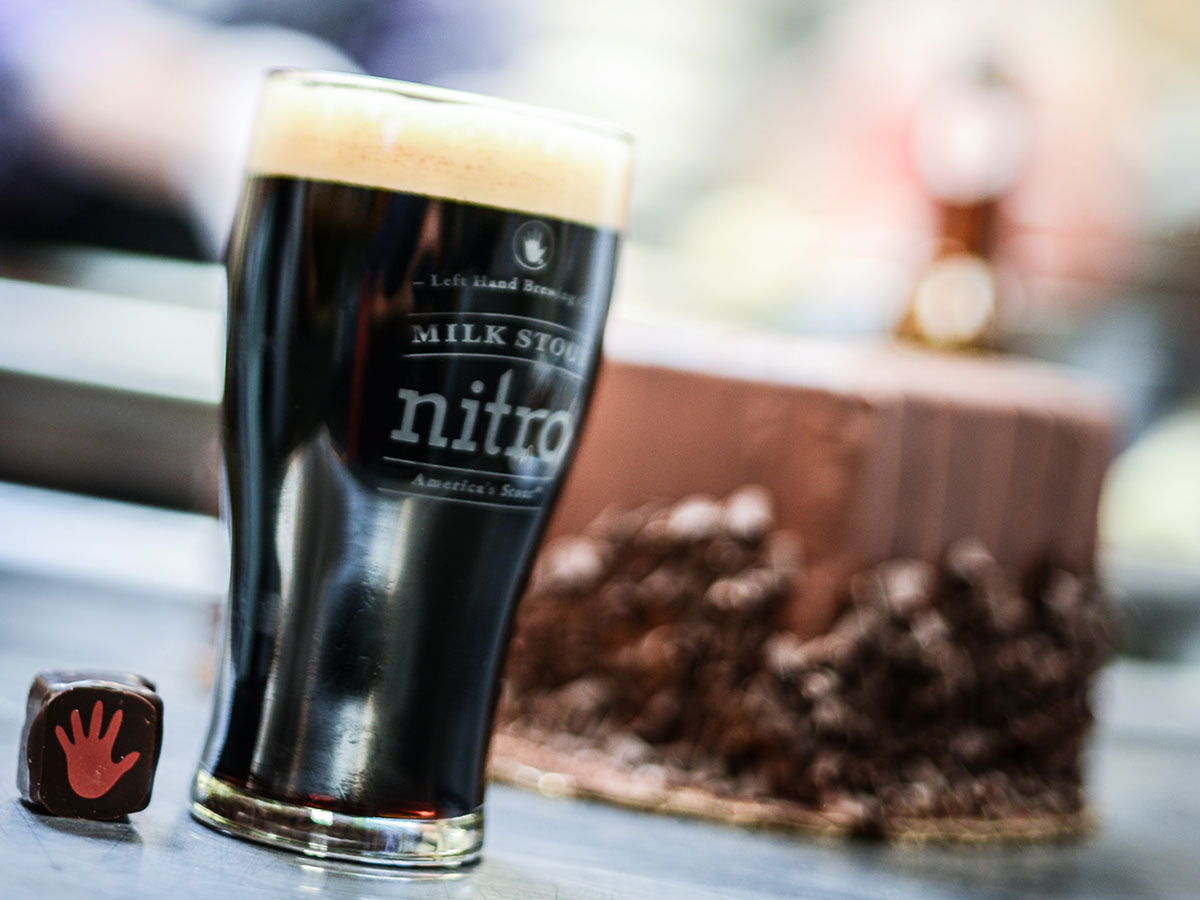 Sarah likes to take the idea of pairing craft beer and chocolate beyond just putting a chocolate next to a beer and tasting them together. As Sarah explains, “I am not a fan of pairing simple bar chocolates with spirits. I prefer chocolate desserts for a more comprehensive and exciting culinary experience. Some of these desserts have beer incorporated into them, and others are just really delicious when consumed with certain beers.”

“Not all beers make good mousses, and even fewer make a terrific ganache,” she said. “Sometimes, in a baked good like a cake, we will first reduce the beer down to a more concentrated flavor. However, so as not to sacrifice some of the nuances and delicate flavor notes in the beer that might have been lost to heat or evaporation, we may fold the beer in its original state into an additional component of the final dessert or pastry, thereby retaining all of the unique flavor notes of the selected craft beer.”

A Few of Our Favorite Pairings

Both beer and chocolate are versatile enough to accommodate and complement many flavors, so there is room for a lot of creativity in imagining how the two can pair together. Below is a list of some of the best pairings we have developed over the past year. A majority of these are centric to Piece, Love & Chocolate and/or Colorado craft beer, but I think there are valuable takeaways for anyone looking to pair beer and chocolate.

3 Tips for Pairing Beer and Chocolate was last modified: November 15th, 2016 by Jeff
CraftBeer.com is fully dedicated to small and independent U.S. breweries. We are published by the Brewers Association, the not-for-profit trade group dedicated to promoting and protecting America’s small and independent craft brewers. Stories and opinions shared on CraftBeer.com do not imply endorsement by or positions taken by the Brewers Association or its members.