1800 BC (Circa) A “Hymn to Ninkasi,” the Sumerian goddess of beer, is inscribed on a tablet, about 4,000 years after men first leave evidence of brewing activity.

Saint Arnold of Metz is born, one of dozens of patron saints to beer, brewers and hop-pickers. He helps end a plague by convincing people to drink beer rather than impure water.

The Reinheitsgebot, instituted in Bavaria, is a beer “purity law” that remains today in revised form. The original laws permits beer to be made only with barley, hops and water, later acknowledging yeast and permitting wheat.

Heinrich Knaust writes the first extensive book on brewing in Germany, describing in detail about 150 different beers. He calls the “noble Hamburg beer the queen of all other wheat beers.”

The tavern that will become known as the Wayside Inn after being immortalized in Henry Wadsworth Longfellow’s Tales of a Wayside Inn opens in Sudbury, Mass. Nearly 300 years later it’s the oldest continuously operating inn in the United States.

A storage vat at the Horse Shoe Brewery in London containing more than 300,000 gallons of porter collapses, knocking down brewery walls and flooding immediate area. Eight people are killed, “by drowning, injury, poisoning by porter fumes, or drunkenness.”

Prohibition, in the form of the 18th Amendment, outlaws the sale of alcohol in the United States. Key dates to remember:

Because it is not practical to ship beer, the HMS Menestheus, a British mine-laying ship, is converted into a floating brewery to supply beer to British and Allied troops in the Asian theater during World War II.

The late Michael Jackson, “The Beer Hunter”, drinks his first beer at the Castle Hill Hotel in Huddersfield, Yorkshire. Twenty years later he writes “The World Guide to Beer,” one of the inspirations for the “beer revolution.”

Development of Cascade hops begins in Corvallis, Oregon, in 1956. The hop is released to brewers in 1972 and becomes a hallmark aroma and flavor for beer from American small-batch brewers.

Smithsonian Magazine states: “The best beers in the world today are being made in the U.S.”

Craft brewers reached 12.7 percent volume of the total U.S. beer market in 2017. The retail dollar value from craft brewers was estimated at $26 billion. More than 7,000  U.S. breweries operated for some or all of 2018.

Native Americans made a corn beer long before Europeans found their way to America, bringing with them their own version of beer. Although most of that was brewed in the home during the seventeenth and eighteenth centuries, a fledgling industry began to develop from 1612, when the first known New World brewery opened in New Amsterdam (now Manhattan).The “modern era” of American beer began in the nineteenth century. In 1810 only 132 breweries operated and per capita consumption of commercially brewed beer amounted to less than a gallon. By 1873 the country had 4,131 breweries, a high water mark only surpassed again in 2015. In 1914, per capita consumption had grown to 20 gallons (compared to about 21.5 today). Then came national Prohibition.

American beer was already changing before Prohibition. When German immigrants began arriving in the middle of the nineteenth century they brought with them a thirst for all-malt lagers and the knowledge to brew them. But by the end of the century, drinkers showed a preference for lighter-tasting lagers — ones that included corn or rice in the recipe — and consolidation began to eliminate many small, independently operated breweries. In 1918, the country had only one quarter the number of brewers that operated 45 years before.

National Prohibition (individual states had Prohibition as early as 1848) began January 16, 1920, when the 18th Amendment, also known as the Volstead Act, went into effect. It effectively ended in April of 1933 with the return of 3.2% beer, and in December the 21st Amendment officially repealed the 18th Amendment. Within a year, 756 breweries were making beer, but the biggest companies remained intent on expansion, using production efficiencies and marketing to squeeze out smaller breweries.

The number of breweries shrunk quickly, to 407 in 1950 and 230 in 1961. By 1983 one source counted only 80 breweries, run by only 51 independent companies, making beer. As British beer writer Michael Jackson observed at the time, most produced the same style: “They are pale lager beers vaguely of the pilsener style but lighter in body, notably lacking hop character, and generally bland in palate. They do not all taste exactly the same but the differences between them are often of minor consequence.”

Something else was happening as regional breweries closed. Not only were Northern Californians nurturing the rise of “California cuisine” and local wineries but also small breweries so new people didn’t know what to call them. What started when Fritz Maytag bought Anchor Brewing in 1965 continued when Jack McAuliffe opened the short-lived New Albion Brewing Company in 1976. This is an example of an entrepreneurial act repeated a thousand times over and in every state in the country.

By the end of the century, more breweries operated in the United States than any country in the world, the number climbing past 7,000 in 2018. Taking inspiration from brewing cultures around the world, Americans also brew a wider variety of beer than anywhere. “I have no doubt that America is the best place to be a brewer because we don’t have the burden of having to carry on a long brewing tradition,” explains Phil Markowski, brewmaster at Southampton Public House. “We have more freedom to be creative and can gather influences from all over.”

As American beer enthusiasts are fond of saying, there may never have been a better time to be a beer drinker, at least until tomorrow.

It wasn’t always so beer wonderful. After U.S. Prohibition ended with the enactment of the 21st Amendment to the U.S. Constitution, only about 300 breweries emerged to continue brewing. More than 800 breweries died during Prohibition. Between 1933 and about 1982, about 700 breweries were reduced to close to 50. The prospect for local and regional breweries seemed dire and bleak, however, things were about to change. In 1982, there were about six newly-emerged microbrewers. A democratization of beer began in earnest during the late 1970s by homebrewers. It was then that better beer began its journey, championed by individuals and not corporate strategies. Homebrewers began learning how to make the beer styles they could no longer buy. A few homebrewers started their own small breweries, the first new breweries to open since prohibition began in 1923. A revival had begun. Beer drinkers learned to appreciate these new “microbrews.” The term microbrews has since evolved to “craft beer;” particularly from small and independent brewers (see What is Craft Beer).

The revival of American beer of the past 30 years is a phenomenon attributable to one of the first (if not the first) “open-source” collaborative experiences in modern history. The community of homebrewers, beer enthusiasts and craft brewers made the pioneers of the democratization of process. The fact is, homebrewers were already fashioning their own revolution before a communication technology emerged that would later enhance the means by which revolutionary ideas and the process of democratizing innovation would be accelerated.

The professional craft brewing, homebrewing and beer enthusiast community continues to be on the unequivocal cutting edge of beer’s creative destiny. If you look back at the last 30-year history of better beer, beer economics, beer enthusiasm and the beer marketplace, it is a mirror image of how the rest of the world has embraced, reacted and adjusted to the pace of all that it is involved in. Choice, diversity, information, education, grassroots activism, quality, personality, passion, flavor (both in the real and metamorphic sense), etc.

Craft brewers and craft beer enthusiasts have been and continue to be pioneers in developing a world that contributes to the pleasure of our everyday life, in more ways than beer. CraftBeer.com is a reflection of those who seek the world of better beer.

The unique beer history of the Brewers Association combines a large brew-cauldron of activities and heritage. The result is a legacy that has helped change the world of beer both in the United States and abroad.

As of December 2018, the Brewers Association recorded a record high of more than 7,000 breweries operating in the U.S.  Craft brewers currently employ an estimated 135,000 full-time and part-time workers in a variety of roles including many manufacturing jobs, all of which contribute significantly to the U.S. economy. 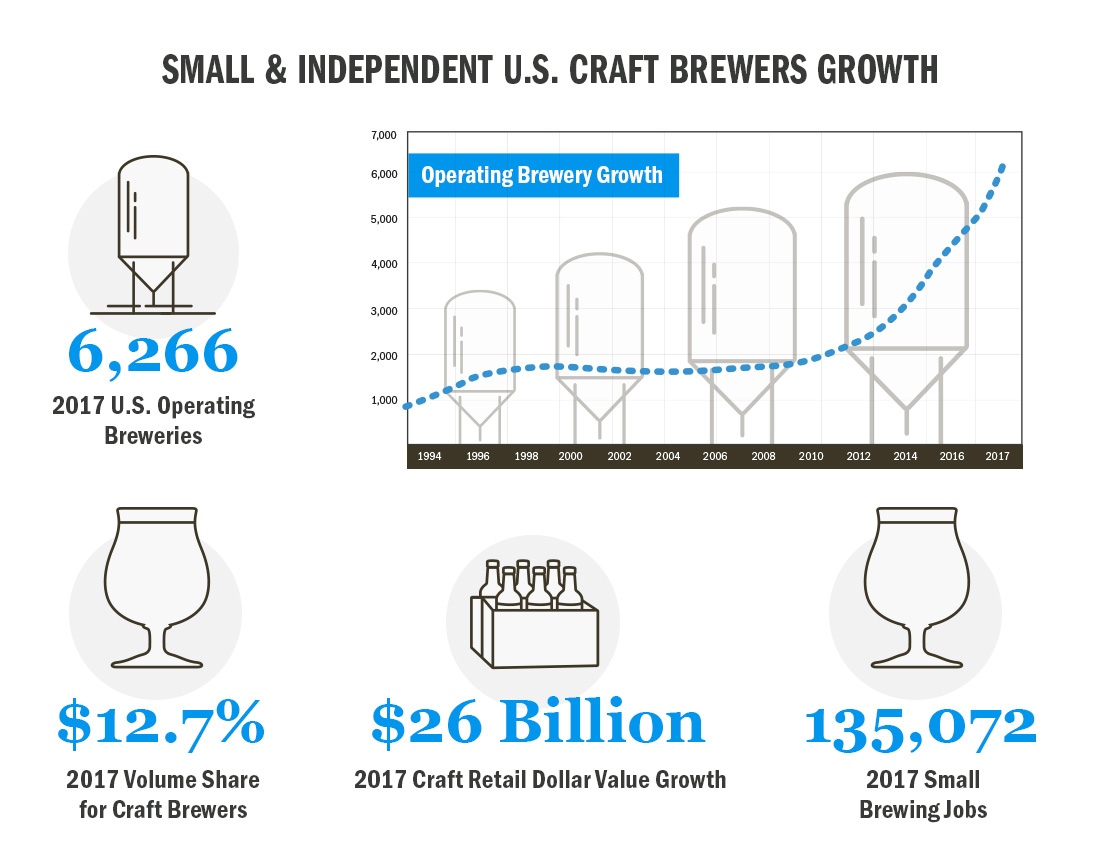