Sour Power: The Wild Side of Pairings

As Americans continue to embrace tart-flavored craft beers, these styles are finding their food pairing footing across the U.S. From a blueberry pie in Maine to a citrusy salad in California, these beers, crafted with distinct Belgian techniques that involve wood barrels and spontaneous fermentation, are holding their own next to some of America’s most beloved foods.

Sour and Wild Beer: The Distinction

The terms wild and sour in reference to craft beer are usually used interchangeably, but there is a difference. Beers are soured by introducing acidifying bacteria (Lactobacillus and Pediococcus being the most common) to fermenting beer. Wild beer is generally used to describe any beer that displays the earthy characteristics of Brettanomyces yeast strains—often shortened to Brett—regardless of whether the beer is a light golden ale or a strong dark stout. Often these styles receive all three of the bacteria to blend a funky, sour character that many beer geeks have developed an affinity for.

From coast to coast, America’s small and independent craft breweries are producing sour and wild beers that pair perfectly with regional dishes.

In the Pacific Northwest, sour beers are more than a beverage accompaniment with meals, they are ingredients in recipes. The chefs at Cascade Brewing Company in Portland, Ore., use their Cascade Kriek to enhance locally-grown cherries, Cabernet Sauvignon grapes and other seasonal fruits that are added to compotes for meat and cheese plates.

These sometimes tangy beers are also strong enough to replace vinegar in vinaigrettes for salads or give a flavor spike to Carolina-style barbecue sauce. 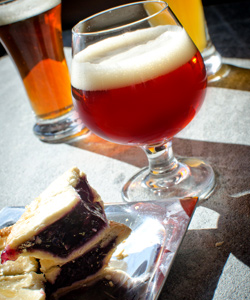 Nothing says Atlantic Northeast like seafood rolls. Whether they’re paired with shrimp, crab or lobster, sours are a match for them all. Their vibrant, citrusy notes slice through the rich, fattiness of seafood.

Sours are just at good at showing their sweet side, too. In Maine, where blueberries grow as wild as Brettanomyces, the tartness of these beers accent the sugary sweetness of pie. These yeasty beers cut through sweetness without overpowering the light, earthy elements of fresh-picked blueberries.

Peaches, whether fresh-picked or cooked into a spicy sauce and drizzled over shrimp and grits, have found a new friend in craft beer. The tangy element of sour beers like Tampa-based Cigar City Brewing’s Kumquat Berliner Weiss, bring out the natural flavor of fruit, without overpowering it.

The uniquely crisp quality of sour beer, combined with the complex flavor profile of sauces made with peaches and other fruits, creates a party on a palate. And just as easily, sour beers balance out strong flavors while making them dance off each other. From cioppino in Florida to gumbo in New Orleans, these beers effortlessly break through rich, thick and spicy southern staples. 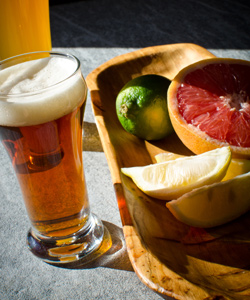 The flavor from Brett gives sours the legs to stand alongside earthy produce like potatoes grown in Idaho or mushrooms produced in California. These beers play just as well alongside California’s more delicate flavorful crops too, like peppery-flavored arugula.

When combined with California’s abundant citrus like lemons, limes, grapefruits and oranges, sour beers create an unmatchable flavor sensation. Creating a pairing with citrus fruits, which are strong enough that they don’t mind the bright acidity of a sour, causes quite a pop on the palate.

Sharp-flavored sour beers can handle heat, and with the wild yeasts and unruly bacteria strains they’re known for, they’re right at home among the spice-heavy foods of the Southwest.

The beers stand up particularly well against pepper-laden tex-mex staples like hearty bowls of spicy chili and chipotle black bean soups. Fatty beef, like those cuts of meat traditionally found rotating for hours over a barbecue spit in Texas, hold up against the strong flavors of a sour beer. The tangy bite of these beers bring out the meaty flavor that can sometimes be downplayed by barbecue sauce. 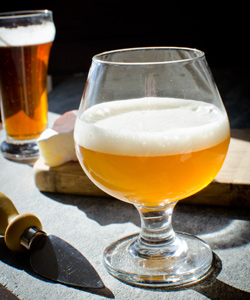 Even in the Midwest, where long-standing, traditional brewers have crafted beer for decades, sour beers are becoming more and more of a welcomed flavor. Central Waters Brewing Company released their sour, Exodus, at the 2012 Kohler Festival of Beer in Kohler, Wis.

When it comes to pairing cheese with sour beer, which can taste a bit funky, the rule of thumb is: the stinkier the better. Aged Brie is a good choice; and tart beers pair as well with sharp Cheddars, Blues and fatty Mascarpones.

Sour Power: The Wild Side of Pairings was last modified: October 22nd, 2013 by Ashley Routson