Many beer lovers are so passionate (I’m guilty) that we choose establishments based on their positive beer practices. Being fairly picky about beer service is easy to do these days, as there are so many bars and restaurants that meet expected standards. Unfortunately, there are even more bars that treat beer as a mass-produced commodity, shoving it to the sidelines without even truly knowing it.

It is important to recognize those craft beer bars that are right on target—as thousands of CraftBeer.com readers recently did in the Great American Beer Bars survey—and it is just as important to spread the beery word to those bars that could easily up their game and become a go-to for beer fans.

I’ve put together a list of my top five signs that a craft beer retailer is not as connected with today’s beer community as they should be. This list is not meant to make beer highbrow, rather take a look at the fundamentals of craft beer service. When a bar does not take these practices into consideration, it’s very difficult to enjoy a beer as the brewer intended.

(WATCH: Enjoying Craft Beer Out of the Glass)

Remember, in most cases, your server is not the one making these decisions, so always be kind and try to be a beer steward—not a beer snob—when pointing out where you feel a bar is making a beer blunder. 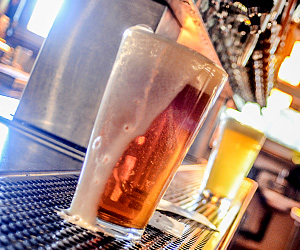 Hidden behind each and every tap handle are beer lines that require a specific cleaning routine to prevent microbes and minerals (beer stone) forming inside the lines. If you’re ever suspect, ask the manager or owner how often they clean their draught lines. If they don’t automatically answer “every two weeks,” there are likely issues.

Common things that you as the beer drinker may notice include flat or sour beer and excessive foaming. Every beer bar should ensure this base is covered. Period. Bottom line. No excuses. Skirting draught line maintenance is comparable to a restaurant only sometimes washing the dishes. 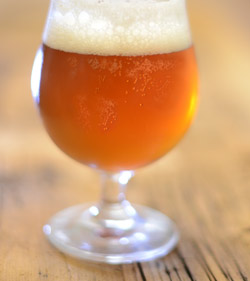 Speaking of dirty dishes, a customer should never be expected to drink from a glass that has residue from a previous customer or detergent. Dirty glassware is, unfortunately, a common and egregious oversight by many bar owners today.

When bubbles cling to the sides of your glass instead of rising to the top, they are most likely stuck on some sort of residue. These dirty spots on a glass are called “nucleation sites” and are usually attributed to food, detergent, oils and other contaminants, which give the carbonation bubbles something to cling to.

If you see bubbles clinging to the sides of your glass, you have every right to ask for a new glass.

How to Test for a Beer Clean Glass

See more details in the Draught Quality Manual from the Brewers Association, publishers of CraftBeer.com.

Craft beer should be treated like food and stored cold. When beer is stored cold, the production of undesirable off-flavors and oxidation is slowed. Oxidation can produce flavors like wet cardboard, metallic, honey, almonds or unintentional souring. 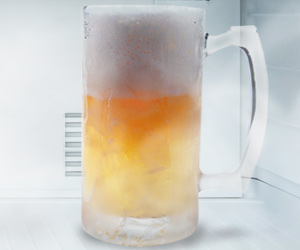 Avoid retailers who serve craft beer in frozen glassware, or be sure to ask for a room temperature glass. Sure, a frozen glass is seen as a fun ritual by some, but a ritual of the past does not mean it should carry on into the future. Think about it this way: Would a restaurant allow their chef to serve meat or fish that was stored open in the freezer with no protective packaging?

Besides off-flavors reminiscent of the ice crystals from the sides of a freezer, the colder temperatures mask craft beer’s flavors and cause excessive foaming.

(INFOGRAPHIC: How to Pick the Best Beer Glass) 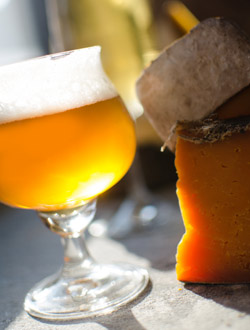 Based on tradition, lack of beer pairings is semi-understandable if it’s a dedicated French restaurant, but that is about it. It’s high time beer education and pairing becomes mainstream in American restaurants. Talk to me in 10 years; I hope beer pairings will be a no-brainer for most establishments.

Wine is not the end-all, be-all to pairing. Beer accounts for more than $100 billion in sales in the U.S., compared to $50 billion for wine, and is an expected addition to restaurant beverage menus. Come on retailers and beverage educators — get with the beer times!

Bottom line: As a fan of craft beer, and in most cases a paying customer, you have the right to expect certain care be taken with the beverage you’re being served. Now, this does not mean you should ask every bartender and waiter you encounter about their draught line cleaning schedule — but if you do encounter a problem, politely bring it to the attention of the right person.

Editor’s Note: Data has been updated to reflect 2016 numbers.