The craft beer industry has always embraced a creative culture, which is what inspires upstarts like us at Benson Brewery. As we start to forge our destiny here in Omaha, Neb., we’re tapping into an ancient brewing idea that goes back to some of the first creative minds that ever lived: the amphora.

An amphora is a type of clay pot used in early human societies for storing a myriad of liquids, most certainly including alcoholic beverages. We decided to use this ancient vessel to make a modern beer. After tasting the results, we believe that clay-aged beer deserves to return from the depths of history.

Clay fermentation vessels were already in use overseas, both by vineyards and by the Belgian brewmasters at Cantillon. But to discover for ourselves the influence clay has on beer, we decided to make our own amphoras.

Serendipitously, we met Dan Tober, a local ceramic artist and avid homebrewer. He jumped at the opportunity to combine his love of beer with his skill in molding clay. Using images of amphoras from ancient history, as well as modern examples from overseas, we collaborated with Dan to create our own design, enhancing this ancient technology to fit today’s brewing process.

The tall, narrow body of the pot is an advantage for fermentation. When yeast get to work converting sugar into alcohol, it creates a convection-like current that mesmerizes homebrewers when they peer into their carboys. This cyclical movement is encouraged by the design of our pots, thousands of years in the making.

To modernize the design, we added small details that would bring these ancient fermenters up to date with current brewing technology. Advancements like airlocks, pressure-sealed gaskets and racking arms are all courtesy of today’s scientific understanding of beer-making.

There’s something else we know that our early ancestors didn’t: Clay is porous, like wood, and that means beer stored in a clay vessel will absorb oxygen at a controlled rate, just like beer stored in wooden barrels. And that, it turns out, is hardly the only advantage of clay. 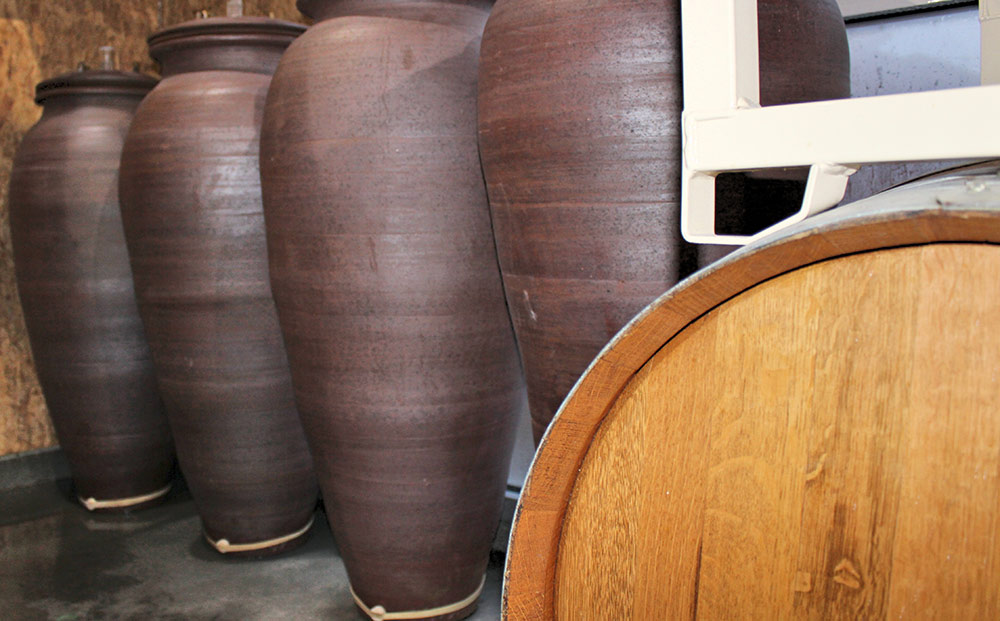 The effects of clay on fermentation have been extensively studied by Dr. Pat McGovern, a biomolecular archaeologist at the University of Pennsylvania. He is currently involved in an international project studying the ancient use of clay for fermenting wine, and he also has extensive experience brewing beer. Dr. McGovern was a collaborative member of Dogfish Head’s Ancient Ales project, which has reproduced the brewing recipes of yestermillenium with such beers as Chateau Jiahu and Birra Etrusca Bronze.

Dr. McGovern’s research with ancient fermentation revealed that clay “also provides a host of benefits besides ‘micro-oxygenation,’ including enzymatic and polymerization reactions for producing unique flavors and aromas. Clay has a zeolite or ionic structure which wood doesn’t.”

The unique properties of our clay pots make the Benson Brewery amphora project one-of-a-kind. We’re continuing to research the potential of clay as an alternative to aging beer on wood, and the early results are encouraging. 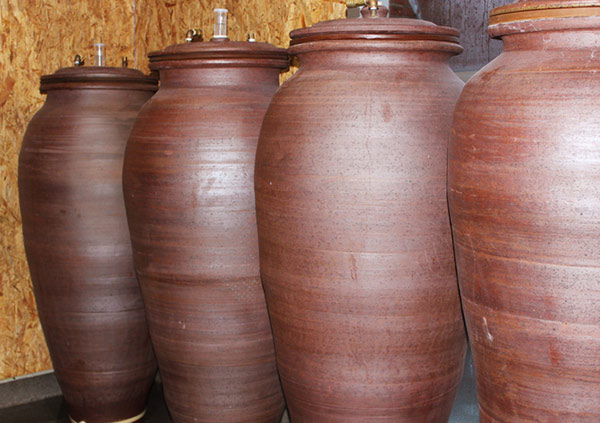 We see evidence that our clay amphoras add minerals to the beer, increasing its body. We also have more control of micro-aeration as we experiment with different ways of kilning the pots. And we find that the beer captures the local terroir flavors from the clay vessels themselves. All of which supports the most important part of this project, which is to give beer drinkers the opportunity to explore new types of flavors and to reconnect with the beers of our early ancestors.

Our amphoras are a reflection of human creativity that goes back to the dawn of civilization. The idea of using silt-rich soil to mold a structure that could hold liquid is a powerful innovation and a big step in humankind’s development. In the primitive stages of our business here at Benson Brewery, we are proud to be a part of the timeless tradition that is brewing, and we’re excited to exercise our own creativity when it comes to re-inventing the wheel—or, if you will, the amphora.

Andy Elliott is Head Brewer at the Benson Brewery in Omaha, Neb. Originally from Colorado, he pursued his dream of joining the brewing industry by attending Colorado State University and majoring in Food Science. At CSU he made connections with brewers from New Belgium, Odell Brewing Co., Funkwerks, Equinox and the Fort Collins Brewery. He accredits much of his Brewing Education to the year long brewing internship with Odell Brewing Co.