Does tradition trump taste when it comes to craft beer?

America is a beer-loving nation first and foremost. In the U.S., when the sales of wine and spirits are combined, they just match total beer sales. A lot of that can be attributed to the growth of craft beer, made by small and independent producers. These full flavored, diverse craft beers are also an amazing and versatile element in the kitchen and at the dinner table. So knowing that, why aren’t more culinary institutions and chefs cooking with, pairing to and teaching about craft beer?

I understand that change is slow, especially when history and habit are involved, but I think it’s time to peel back the layers of this culinary conundrum, now that craft beer has a strong hold on the American palate. Progress has been made (see below), but as beer lovers have likely been wanting to point out for thousands of years, we are far from a place where there is equal culinary treatment of all fermented beverages.

Today, I can excitedly—and truthfully—state that craft brewed beer has helped beer reclaim its place at the dinner table. Yet while there are groups within the foodie world that recognize this, far too many do not, and I’m not sure why. Surely foodies, bartenders and chefs are talking to each other?

Here are a few things we know for sure:

Craft beer is a hot topic people! So hear me roar, this is my rally cry to the foodie universe: It’s time to put craft beer on equal footing with wine and spirits in terms of education and emphasis in the culinary world.

I’m not the only one who feels this way. Brandon Hernandez, journalist, editor for Zagat Survey and a communications specialist for Stone Brewing Co., mused about this very topic in “Craft Beer: America’s Most Underexamined Culinary Component?” Here are a few of my favorite things he had to say:

“With all this nth degree embracement of every ingredient under the sun, why has such a small percentage of this country’s chefs thoroughly explored the wide-ranging and flavorful world of craft beer? …why not dig deeper with craft beer, a beverage that’s lower in alcohol than wine or spirits, broader in its number of styles and achievable taste elements, and more about providing flavor than either of the aforementioned beverages?”

Hear, hear Brandon! Most excellent questions as sales of craft beer have grown at an average pace of nine percent a year for the past decade.

For my cross-drinking wine friends, I like to say that craft beer picks up where wine leaves off. Wine’s pairing attributes are acidity, fruit flavor, mineral components, tannins and alcohol. When paired with food, wine’s acidity calms fat and salt so food flavors shine brighter.

Craft beer also has varying acidity levels and hop bitterness to calm food’s richness and residual sugar. But, it has additional attributes that take pairing potential further, including carbonation that scrubs the tongue and gets it ready for the next bite, hop flavors, malt flavors, advanced yeast flavors, mineral components, tannins and alcohol to boot! Thirsty yet? 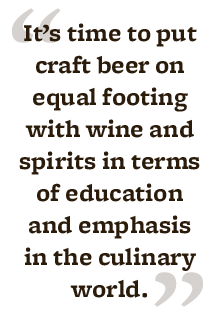 Fact: The amount of craft beer produced for the American marketplace in 2012 was over 100 times greater than the amount of champagne shipped to the U.S. Based on what I see, even amidst today’s local food movement, craft beer does not get as much play as champagne does in the culinary world.

To me, champagne is like the craft beer of the wine world. Not only is it on the high end of its beverage category, but just like beer, it has the pairing plus of carbonation that acts as a palate cleanser.

I think a lot of champagne’s popularity lies in the pizzazz, presentation and prestige of the beverage. It is viewed as a treat, and often saved for special occasions. I’m not here to bust any bubbly-lover’s dreams, but many craft beers have corks and cages too!

Yes, I am a zealous beer lover who should recognize the history and tradition tied to white wine’s frothy beverage of appellation, but a girl can dream, right? I hope one day the tides will turn, and any culinary stigma tied to beer’s past will melt away like butter in a caramel sauce. Is it so crazy to want today’s chefs to recognize and share the amazing possibilities that craft beer brings to the kitchen?

Due to the high ethanol (alcohol) levels that dominate most cocktails and distilled spirits, my experience is that it’s very difficult to pair these beverages based on the intensity factor. The higher ethanol levels simply barrel over most food flavors. Additionally, food with heat clashes with higher alcohol beverages, like oil on fire.

Among the beer styles described in CraftBeer.com’s Style Finder, the average ABV is 5.9 percent. Compare that to the average wine ABV at 13.6 percent, and the average distilled spirit at 80-100 proof (40-50 percent ABV). When you pair a higher alcohol beverage with a hot, spicy food, the alcohol literally opens up the pores on your tongue, making you even more sensitive and receptive to the heat. The big pairing takeaway here is that craft beer is a natural fit with spicy food due to its lower ABV, plus it has a calming effect on heat thanks to the beverage’s residual sugars. Sweet calms heat—it even rhymes!

Culinary Institutions With an Emphasis on Craft Beer

Now that we’ve compared the pairing prowess of craft beer to the other two main fermented beverage categories, let’s look at some of the progress we’re seeing in the culinary world. Several of the top American culinary institutions are making strides in their beer education. Kudos! However, from our research, it is clear that the majority of leading culinary institutions still emphasize wine over all other beverages. Here are a few examples that give us hope in the craft beer world:

Johnson & Wales University’s curriculum has an ever-increasing emphasis on beer. Their Providence, Rhode Island campus even has a pilot brewing system and brewing club that many of their students participate in. Their growing commitment to the beverage of beer is very encouraging.

Earlier this year, the Siebel Institute of Technology, America’s oldest brewing school, committed to moving their campus to the facilities of Kendall College in Chicago. This is big progress, and will not only up Kendall College’s beer education game, but will also expose one of the world’s top brewing schools to a broader array of food-minded professionals.

From the press release: “In the coming years, these two respected educational entities will collaborate to offer new courses and programs that focus on the emerging synthesis of the brewing and cooking cultures, creating a new generation of graduates that will expand the horizons of the culinary arts for generations to come.”

Not yet announced, but confirmed, one of today’s small and independent craft brewers is working with the Culinary Institute of America to help them further develop their beer education curriculum, which currently includes Brewed: History, Culture and Production for those students pursuing their bachelor’s degree in culinary arts with a concentration in advanced wine beverage. In addition, the Hyde Park location has plans to add a brewing system.

Assistant Professor John Fisher said,“We’re building a 3- or 5-barrel system into the Student Recreation Center. Right now we have a class on sake, mead and cider production; with the addition of the brewery we’re designing more courses to take advantage of the new technology.”

Cheers to these leaders, and thank you from the bottom of this beer-lover’s heart! Here’s to the continued embrace of craft beer from the foodie world and its educators. My hope is that the food world evolves to a place where taste truly does trump tradition.