Craft Beer Styles: Why They Matter & When They Don’t

Imagine your city is abuzz about the newest restaurant in town: Julio Wasabi McMurphy’s Americana Emporium of Fine Dining. All the food bloggers give the menu two cyber thumbs up, while Derelict mag says it’s sophisticated place for co-eds to co-mingle.

You’re ready for an amazing glutinous experience, but when the menu arrives, it’s full of haughty culinary language and superfluous adjectives: “Enjoy eating greatness? Then this super complex, one of a kind delicacy will indulge your deepest gustatory cravings.” Aside from feeling like you’ve just read a smutty romance novel, you’re a bit confused.

What is the cultural background of this entrée—Greek? Thai? Cuban?

What are the key flavors of this appetizer—salty? Sweet? Sour? Savory?

The fish of the day is wild Arctic grayling—what in the world does that taste like?

Befuddled, you sample a few things and leave in a hissy fit, trying to decide between a McRib and chicken rings on the way home.

Of course it does!

In food, just as in beer, categories and descriptions help us characterize and discern between choices, allowing us to narrow down broad descriptions to specific traits. Milk of Magnesia has a chalky texture and minty flavor, unlike honeydew, which is sweet and light—you’re tongue knows the difference, but words define that intrinsic knowledge.

Through our experiences, we’re able to make generalizations, like Italian food often uses garlic and basil and is good for carb loading. Hispanic foods are spicier, often feature peppers and are usually accompanied by some form of taco-ish thingy. Information like this dictates our decisions as we peruse culinary lingo and sift through cravings to gain sustenance and pleasure from food.

Along the way, we learn food vernacular to support and enhance our appreciation and allow us to talk about our experiences with others. These words help us navigate the perpetual question, “What are you in the mood for?” and give us answers when girls inevitably say “You decide,” and list 37 restaurants they like. Words like spicy, smoky, rich, sweet and delicate are just the outside layer of the onion that is learned food (and beer) dialect.

The Importance of Beer Styles

I was at a bar recently, the weather was jorts appropriate and I was gnawin’ on something classy like tater skins. This scenario creates quite a conundrum in the head of a person like me—what. beer. is. perfect. for. this. moment?! I asked my server to tell me the style of a beer listed on the menu that had a description with lots of words, but didn’t give me a clue as to what I might be ordering.

Our server hunted down the bar’s “beer expert” who came to the table to inform me that styles didn’t matter anymore. Inside I was screaming “WTF!?”—but I kept it cool, because the beer Jedi Force was working within me (read: “Episode V: The Beer Geek Strikes Back“). It’s difficult to make a decision when beers like Dragon’s Breath Ale and Crazy Monkeyduck Hefenlager are on a beer list without descriptions and the resident beer swami tells you that styles are obsolete.

This is all groundwork to say: beer styles are really important.

Beer styles lay a foundation for understanding a particular beer. The historical beer styles outlined in The World Guide to Beer by Michael Jackson and The Essentials of Beer Style by Fred Eckhardt are incredibly important works. Their research categorized beer based on regional styles and techniques from Europe, in addition to early American craft beer styles. Each style represents centuries of refinement based on mineral content in water and experimentation with ingredients.

Maybe more importantly, craft beer styles instantly arm us with information and descriptors that allow us to make informed decisions in a seemingly endless world of beer options. Styles and their descriptions get the taste buds churning, and help us make choices based on our mood or what we might be pairing to.

I’m convinced that people who say they don’t like beer haven’t given it a fair shot, and are only referring to watery, adjunct lagers. If you enjoy flavors and food—and who doesn’t?—there’s bound to be a beer you’ll love, as many flavors from the rest of the gastronomic world are echoed in beer. 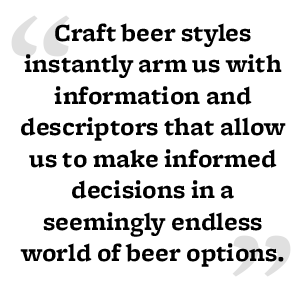 Our working knowledge of beer styles helps us steer through flavors and preferences to make decisions based on what we currently know. The Style Finder on CraftBeer.com is a great place to start learning about basic styles and how they relate to each another. In addition to basic style information, the Style Finder also provides spot-on commercial examples of each style to help you find beers to taste, because we all know tasting is the fun part!

Each brewery’s Baltic porter will be slightly different, but once you know a few basics about what a Baltic porter is like, you will have expectations, just like you would after ordering a chimichanga. Once that working knowledge is in place, beer ordering becomes an adventure of your preferences and desires to expound on. Learning the lingo of beer beyond light and dark, or hoppy and malty, is a huge part of growing as an educated consumer.

Once You Really Know Styles, Only Then Do Styles Matter Less

All of this is not to say that modern twists and experimentation don’t work, just that it works best when a foundation of history and styles has been established. Once a basic beer style is perfected, then each brewer can paint their own “happy little trees” (read: beers) like a brewing Bob Ross, and consumers can enjoy their unique projects.

How are you supposed to make a good cinnamon-spiced mocha porter if you can’t make a good regular porter? Breweries like Dogfish Head, Stone and Rogue spearheaded the movement of taking classic styles and adding their own special twists in the ’90s and early 2000s. Prior to that, breweries in the ’80s were being experimental by making hop-forward beers with more aggressive American hops compared to the earthier British and more delicate German/Czech hops. Much of our beer culture today stands on the shoulders of these early American craft breweries, just like they were inspired by the great beers of Europe—it’s the circle of life, Simba.

As usual, I undoubtedly sound like a blowhard at this point, so let’s bring in the highly-decorated brewer Pete Crowley of Haymarket Pub & Brewery to weigh in: “It is important to pay homage to history and styles, as well as the great brewers and breweries of the past. Different regions and their histories, water chemistry, available ingredients and time of year all played a part in the evolution of beer styles. American craft brewers have taken those great styles and run with them, creating a new landscape of beers. Brewers are making what they want without worrying about where their beer is supposed to fit in, as long as it tastes great.”

Beware of The Soup Nazi!

The Soup Nazi character on Seinfeld could barely stand the presence of ignorant customers. Don’t be that guy when it comes to craft beer! Learning about beer styles—history, language and statistics—is about personal understanding that enables you as the consumer to appreciate the unique spins brewers take.

Beer styles can have many interpretations and everyone has different preferences. However, to assume beer drinking is completely based on each person’s individual tastes is to dismiss history and more practiced palates. Researched minds and great breweries have set these hierarchical sentiments in place; they need only to be tapped into and enjoyed by folks like you and me.

Forming an understanding of beer styles and history provides a solid foundation for you to build your own house of beer based on knowledge, which is much safer there than building it on the sand of subjectivity.

Craft Beer Styles: Why They Matter & When They Don’t was last modified: August 24th, 2016 by Kellan Bartosch

Kellan Bartosch is co-founder of Wiseacre Brewing Company in Memphis, Tennessee. Kellan a Certified Cicerone®, and hopes that through his writing he can help educate craft beer fans on the many facets of the beer world while landing a few laughs along the way.