It’s really very hard to define beer styles. Our human sensory devices (taste, smell, sight, etc.) detect sensations and our brains process the information, attributing words as labels to define what we are feeling. Each time we try a new beer, a very complex process takes place as we translate abstract flavors into language to vocalize a description.

Over the course of history, beer lovers have done their best to segment beers into styles, applying a collection of descriptors to each. We often describe stouts as dark and malty, our IPAs as bitter. However, out of all the beer styles, I find defining farmhouse-style beers to be the most difficult.

What is a Farmhouse Beer?

Due to history, our discussion of American craft beer styles hinges on the evolution of their European predecessors. We compare American farmhouse-style beers to Belgian saisons and French bieres de garde—both of which have roots in the historical European regions of Flanders and Wallonia—and were brewed in actual farmhouses.

Generally, both were low gravity ales brewed to hydrate and nourish farm workers in areas that well water was not always safe to drink. The recipes varied greatly from farm to farm as each farmer had access to different water, ingredients, local spices and equipment. Over the course of time, borders changed and the regional style became saison in Belgium and biere de garde in France, although both styles lacked consistent and absolute recipe construction, color and flavor profile. 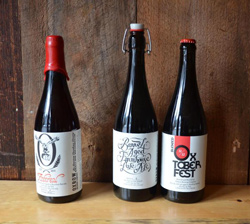 Situated on an 18-acre farm in Newcastle, Maine, 50 miles outside of Portland, Oxbow Brewing Co. fires up its seven-barrel brew house to create uniquely American beers. Its flagship, Farmhouse Pale Ale, is described by Oxbow Co-Owner and Head Brewer Tim Adams as an American saison. It is brewed with Belgian malts, saison yeast, water pulled from their own well and American Centennial hops.

M”We consider ourselves an American farmhouse brewery,” Adams said. “I think you could make a farmhouse-style beer anywhere, but a farmhouse beer is brewed in a farmhouse setting. If you’re pulling water from your own well, you’re probably close.”

Farmhouse brewing is certainly not without its unique set of challenges.”This week in Maine the temperature hasn’t gotten into the double digits,” Adams said. “Our water lines froze in the middle of a brew the other day. Winter here is pretty brutal.” Other challenges include waste water treatment, logistical complications of shipping from a farm with a narrow muddy driveway and unique power requirements—all of which necessitate creative problem solving. Farmhouse brewing is “not the easy way to go about it,” Adams said.

However, brewing on a farm does have its advantages. Adams said that Oxbow has been able to plant a sizable orchard which will grow cherries, raspberries and strawberries. Although their trees have not started fruiting yet, the orchard will provide Oxbow with the ability to produce unique sour fruit beers, including lambics in the future.

Oxbow’s farm in rural Maine, is just minutes inland from the bays of the Atlantic Ocean. “Our location is inspiring,” Adams said. “Despite the challenges, I’m very glad to be in the country.” 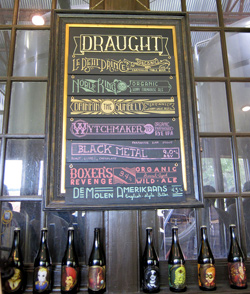 More than 2,000 miles southwest of Oxbow Brewing Company lies Jester King Craft Brewery in the outskirts of Austin, Texas in the farmhouse of a 200-acre ranch. Jester King, which just celebrated its two-year anniversary, produces farmhouse beers with flavors driven from the unique terroir of Texas Hill Country.

Co-owner and brewer at Jester King, Ron Extract, said from the beginning he and his colleagues were focused on brewing authentic farmhouse-style beer. “We just fell in love with that style of beer,” he said. “We love the yeast-driven flavors, and felt it was something absent that needed a presence here.”

“For us, it really involves embracing nature—embracing the land and letting the product drive the process,” Extract said. Crafting authentic farmhouse-style beers takes considerably more time and involves different risks than a typical craft brewery. Extract said that Jester King beers take at least five times (and as much as 20 times) as long to produce than a typical craft beer.

“We use primary-grown yeast and incorporate wild yeast from the Texas Hill Country,” he said. “The notion of it being yeast-driven is essential; but when bigger brewers want to take on the farmhouse styles, they don’t want to spend months making beer, they want to make it quickly. They generally do a quicker fermentation, resulting in sweeter, more highly spiced beers.”

At Jester King, it’s about creating authentic farmhouse-style beers rooted in Franco-Belgian tradition, more than putting an American spin on it. However, because their brewery is in the U.S., their end product is unique to their region. Extract says that he considers Jester King to be a farmhouse brewery that happens to be in the U.S., rather than an American farmhouse brewery.

Currently, Jester King’s farm is not growing ingredients for their beer, but using locally-sourced ingredients when possible is important to their mission. “We feel that to ultimately be a farmhouse brewery we need to use local herbs, fruit and native ingredients,” Extract said. “The land we’re on is not an active farm—it’s farm land. We’re working on changing that.”

While Jester King’s entire lineup is comprised of farmhouse-style beers, perhaps the best example is its flagship, Le Petit Prince. An organic ale brewed with well water and European noble hops, this 2.9 percent ABV beer is one of the best American commercial examples of a beer that would have been brewed by Belgian and French farmers for their workers. Remember, farmhouse beers were originally intended to hydrate the workers when water may have been unsafe to drink. 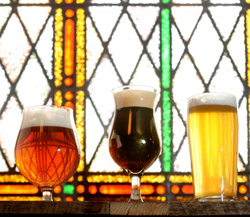 Nestled in the East Hills neighborhood of Grand Rapids, Michigan sits Brewery Vivant, the first brewery to receive Silver LEED certification in the country. Housed in a 1900s funeral home and chapel on brick-paved Cherry Street about a mile and a half from downtown, Brewery Vivant produces exclusively Belgian and French style beers, mostly in the farmhouse style.

“We’ve chosen to pretty much only brew those styles of beer, but we practice a lot of interpretation,” said Jason Spaulding, owner of Brewery Vivant. “We consider ourselves to be a farmhouse brewery. Any brewery can do a saison, but we’ve taken on the approach and the constraints of using farmhouse yeast.” Brewery Vivant also uses a second strain of Belgian yeast for cleaner, abbey-style ales.

Spaulding said the biggest challenge of brewing farmhouse-style beers was that he had to un-learn what he had learned brewing German and English-style beers. Fermentation temperatures aren’t controlled, which is a big adjustment to the brewer’s mind. “We have to let the yeast dictate how the beer turns out,” he said. “In farmhouse-style beers, the predictability is kind of off—we have everything penciled in instead of penned.” Brewery Vivant has installed horizontal storage tanks in case a beer gets stuck and requires more time to finish fermentation.

Brewery Vivant is committed to sustainable practices and that is partly why Spaulding chose to be in a neighborhood rather than an industrial area. Fifty percent of his employees are within walking distance to the brewery and 75 percent are within biking distance. Also, the chapel that houses the taproom may remind patrons of a Belgian monastery, furthering the appeal of the location.

Tim Adams, Ron Extract and Jason Spaulding, like all beer lovers, have a hard time defining exactly what a farmhouse-style beer is. All three agree that it is a slightly funky, yeast-forward beer. It is a style that varies greatly from region to region, even within breweries in the same region (as can be verified by the vast difference in flavors in Belgian and French farmhouse beers). It can be, but isn’t necessarily, brewed in an actual farmhouse, and is an elusive, hard to define style. So, what’s the best way to figure out farmhouse-style beers? Drink some of course!

Michael Ludwig is a Cicerone® Certified Beer Server, with 4+ years homebrewing experience. He holds a journalism degree from Michigan State University and has completed the Siebel Institute's Concise Course to Brewing Technology, a 4-month brewery internship. He currently writes the blog Man Beer School for the Chicago organization Man B Que.