Immaculate fermentation: it’s wild, I say it’s dangerous (in a good way) it’s fascinating, it’s funky. It lends acidity to beer along with a multitude of other flavors and aromas. It’s scientific, yet somewhat spiritual. But, what is it exactly?

Spontaneous fermentation—what I am hereby referring to as nothing short of “immaculate”—is an age-old practice, first by accident and then by intention, that truly puts Mother Nature at the helm of brewing magic. This type of fermentation takes place when ales are fermented with wild yeasts—from an open window, for instance, or already residing in a barrel—rather than cultivated ones such as Saccharomyces (brewers yeast).

The Oxford Companion to Beer(1) sheds some light on the distinction between wild beers and sour beers, from a master of both, Vinnie Cilurzo of Russian River Brewing Co. 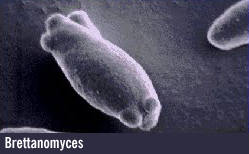 “‘Wild beer’ is generally used to describe any beer that displays the earthy characteristics of Brettanomyces yeast strains, regardless of whether the beer is a light golden ale or a strong dark stout. If the brewer adds acidifying bacteria to the beer, it is termed a ‘sour beer.'”

Sometimes the finished version is blended with an intentionally inoculated beer. But to be wild, to me, some part of that beer had to be spontaneously fermented.

A myriad of flavors and aromas evolve because airborne (or other) funk found a batch of beer and fermented its barley sugars. Again, wild beers are not intentionally inoculated with yeast that has been ‘”wrangled” in the laboratory. On a day-to-day basis most brewers, brewery quality control professionals, and even some biochemists are yeast wranglers. However there are also rogues who dabble in the wild side.

Sour and the Wild Side

When sampling these beers, the sour descriptor comes up often. When it comes from acidity, sourness in beer helps heighten and brighten foods it is paired with. This, by the way, is also why we use so much salt on our food. Both salt and acidity help food flavors “POP.” Sour or acid flavors in a craft beer is the yin to the yang of the sweetness in foods. Try a sour beer with and without food and you’ll see what I mean. Add wild funk into the mix and you’ve got incredible complexity to contrast and heighten your food pairing experiences.

Lucy Burningham featured the topic of sour beers in a 2010 New York Times piece, “Sour Beer Is Risky Business, Starting With the Name,” where she states: “…for the brewers of sour beer, and its fans, the wait is worth it.”

If you travel in beer circles that go beyond the American light lager, then perhaps you too have experienced sour or wild ales. The author of Wild Brews, Jeff Sparrow, explains it this way, “The character of wild beers arises not so much from the ingredients, but from the environment of the brewery: the air, the walls, the wood, and the casks. A unique combination of environmental conditions (winemakers call this terroir) present in every place where beer is produced determines the character of a wild beer.”

The Organisms Behind the Funk

So how do these beers become immaculate and actually ferment without the manual addition of wrangled yeast? They have made it to the promised land by gaining alcohol as a result of wild yeast and microorganisms such as Brettanomyces, Lactobacillus and Pediococcus.

These beers are often more acidic (have a lower pH) than most styles. That’s where the sour, tart and mouth-puckering characteristics come from. Normally, 4.0-4.5 pH on the 0-14 scale of acidity to alkalinity is what to expect. Wild ales most often are in the 3-ish range of pH. For perspective, wines are mostly more acidic than beer and have a lower pH, rarely exceeding 4.0.

Lactobacillus: A microorganism that produces lactic acid and carbon dioxide. Lactobacillus is how we get sauerkraut (fermented cabbage) and is also what sours milk to give us the gift of creamy yogurt.

Pediococcus: A microorganism that produces lactic acid and diacetyl.

Can exist in: lambic and gueuze

Whatever the characteristics, the process takes guts, passion and practice on the part of the brewer, and a little mojo from Mother Nature. Many imported examples exist that are worthy of study, but these are modern beer times with New World U.S. craft brewers venturing beyond their Old World mentors. Here are a few examples of these gems described by their immaculate creators themselves.

Brewmaster Vinnie Cilurzo explains: We start out with a sour mash in our mash tun on a Friday night. On Saturday, we go back into the brewery and run the wort (unfermented beer) off to the kettle just as we would do for a non-funky beer. In the kettle, we use aged hops and sometimes boil for as long as three hours. During this period, we remove the spent malt from the mash tun and rinse it out with cold water to remove all the residual grain.

Once we are done with the kettle boil, we’ll heat exchange the wort back to the mash tun and let it sit overnight. During this period, the wort will pick up some of the bacteria that was left behind from the sour mash. On Sunday morning, we’ll remove the wort from the mash tun and fill used Russian River wine barrels that once housed other sour/barrel beers. The barrels are moved into our barrel room where they will ferment (hopefully) at 62°F. The beer at this point is called Sonambic, our term for 100-percent spontaneously fermented beer. We’ll make several batches of Sonambic a year and pull from several batches to blend and make Beatification.

Two Brothers’ Jim Ebel explains: This Lambic is a blend of two beers, neither containing fruit. The first batch is a wheat-based beer, which is fermented with our house ale strain and Brettanomyces. This was brewed in the fall of 2008 and fermented in stainless steel with added oak staves for flavor. The Brett didn’t start creating those wonderful funky flavors for about six months, and we let it continue to develop in the fermenter for about 20 months. The end result is a very dry, vinous beer with mild Brett character.

The second beer is a sour mash beer—the wild portion of Askew! After mashing in, we allow the mash to sit in the tun for 16 hours, then proceed to brew as normal. This beer was then transferred to our first oak foeder, which had previously been used for Moaten, a Flemish sour collaboration beer we made with the Urthel Brewery in Belgium. Since the foeder was inoculated with bacteria, we did not pitch any yeast or other bacterias, but let it spontaneously ferment. This beer was earthy with a raw grain flavor and lactic and acetic acid.

Our lead microbiologist, Eric Scherzer, then worked with Jason (my brother) and me blending until we achieved a balance we were happy with. The final blend was made and conditioned for 60 days, at which point it was bottled. It’s now been in the bottle for six months.

The final result: Delicious! Askew has a nice malt backbone to cut through the sour, with a lingering acidity that cleans off the palate. The aroma is fruity with apple and pear, maybe some grape notes from the vinous character from the Brett. I expect this beer to continue to evolve in the bottle as the Brett continues churning through those tough sugars.

*Note: Askew was the winner in the CraftBeer.com Pairing Challenge at SAVOR 2011. Listen to the competition here.

Crooked Stave’s Chad Yakobson explains: Nothing quite like it exists as far as I know. The beer is a blend of two beers and two brewing traditions. The first is the base beer, a rustic farmhouse-type ale with 50-percent wheat base and fermented in our oak foeder. This portion of the beer is primary fermented with Saison yeast which we have added to the fermentation. During fermentation, Brettanomyces and Lactobacillus naturally present in the oak foeder start to take over in the beer, developing their flavor characteristics.

The second beer blended into the foeder after primary fermentation is a very traditional Berliner Weisse-type beer produced completely from spontaneous fermentation (the wild part of the beer). We don’t boil the wort and instead collect it into the kettle without heating and then transfer it to the fermenter where it sits for about 10 days as it naturally sours and ferments from the indigenous microbes present on the malt and in the brewhouse. The idea behind this brew is to blend a rustic Farmhouse wheat-type beer with spontaneous German souring methods to produce a crisp sessionable table beer coming in right around 4.5 percent ABV.

The second beer, which is not available yet, is Flor de Lees. This is our Colorado indigenous sour. Many of the details are under wraps for the moment, but we start fermentation with a fruit grown here in Colorado known for its great microflora. The fruit is macerated after being freshly picked and added to a 15-barrel batch of wort in our oak foeder with the natural microbes from the fruit responsible for 100-percent of the fermentation. The beer is then racked into barrels to age. We plan to blend two- and three-year-old sour beer to produce something similar to the Gueuze of Belgium but with a Colorado identity.

Allagash’s Jason Perkins explains: The Coolship project started four years ago, modeled after how lambic beers are traditionally brewed in the Senne Valley and Brussels. A coolship is a large, shallow pan used to cool wort overnight using outside air temperature. During the cooling process, naturally occurring yeast from the air inoculates the wort. In the morning, the cooled wort is transferred into barrels where the fermentation process begins. As of June 2011, we have made 13 batches in this vessel. This summer, we began selling the craft beers made from this project for the first time.

Ingredients for the base lambic are: Pilsner malt, unmalted wheat (40-percent of grain bill), aged hops, and, yes, it is all fermented by Mother Nature. During the brewing process, each batch does go through a decoction mash where we will not only boil all the ingredients together, but we pull off some of the unfermented wort and boil it separately there by concentrating it further, and then blend it back into the overall batch.

Check out an actual coolship where immaculate fermentation occurs at Allagash Brewing Company.

There are countless other amazing wild and sour beers being created by America’s small and independent craft brewers, such as Lost Abbey, Jolly Pumpkin, Captain Lawrence, Cambridge, Cascade, New Belgium… the list goes on and on.