I’ve yet to meet a beer style that has more people either lovin’ or hatin’ on it than pumpkin beer.

This delicious and seasonally-based style is so well liked that in the month of October it rivals the popularity of India pale ale, the top-selling craft beer style in supermarkets across America. In fact, pumpkin beers are so popular that for the first time ever, the style will have its own dedicated category at the 2014 Great American Beer Festival. Yet for every fan, there’s someone else defiantly taking a stand against it.

Why do some beer lovers have their knickers in a bunch over pumpkin beers? Is it the fact that pumpkin beers (along with the rest of the seemingly endless pumpkin-flavored foods and products) are often released before fall properly begins? Or is it the flavor combination of pumpkin and pie spices that creates the divide? Maybe it’s the way some brewers use alternative forms of pumpkin that are not picked fresh from the vine and put straight into the kettle?

To these questions, I say: “Who cares?” Yes, that’s right, I said it. What is gained by bashing or dismissing a beer style or brand? I always encourage beer drinkers to bring along the uninitiated—keeping in mind some can easily be turned away.

We as beer lovers are influencers, and new beer drinkers are impressionable—just as we once were. So if you don’t like a beer or style, don’t hate. Instead, let others decide for themselves.

No one objects to department stores putting out bathing suits in February, long before you’ll be heading to the beach. Everyone loves the taste of grandma’s famous pumpkin pie recipe—and heaven help you if you object to her making it with the same canned ingredients she’s been using since before you were born, kiddo. But for some reason, people think objections like these are legitimate when it comes to pumpkin beer.

Even USA Today’s beer columnist has helped fuel this polarizing frenzy. In a recent article he complained, “Yes, it’s not even Labor Day and pumpkin beers have overrun my favorite beer boutiques. Oktoberfest fans will have to hunt through a patch of pumpkin beers to find those seasonal favorites. OK, I may be exaggerating…a bit.”

To me, this all sounds like a bunch of malarkey! Fall is for whatever fits my fancy at the time, including Oktoberfests, wet hop beers, porters, stouts, pilseners, barley wines, and hell yes, it’s for enjoying seasonally-specific and appropriate spiced pumpkin beers made from fresh, frozen, canned or otherwise preserved squash. 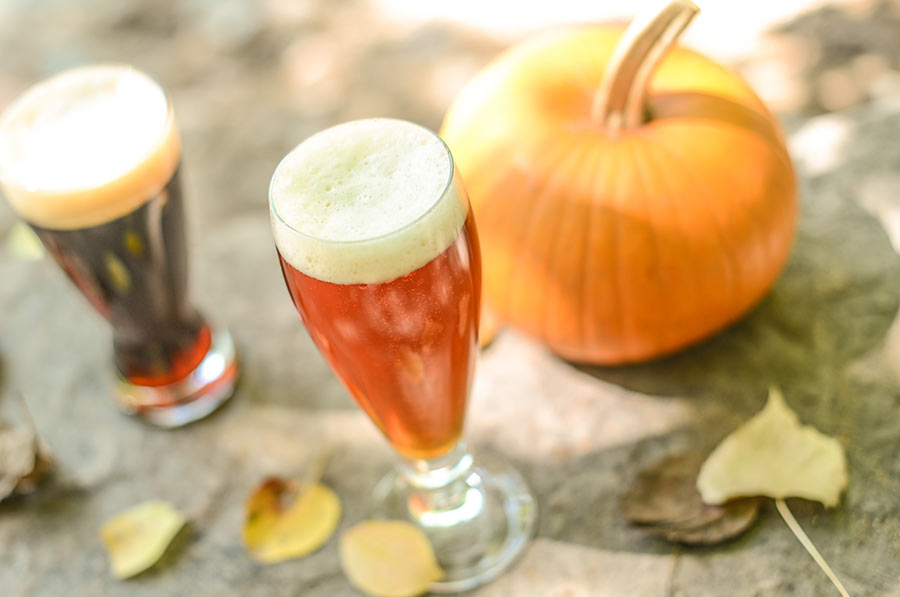 Pumpkin Beer: Timing is Everything

Across the board, late summer is the time that retailers use to get us into the fall mood. Why should it be different for craft brewers? Brewing, packaging and marketing a beer takes time, not to mention if the beer is to be barrel-aged, or requires longer to ferment. And timing is important when brewers consider keeping up with their core brands while also adding a seasonal beer.

Plus, thirsty pumpkin lovers expect their favorite seasonal to arrive on time and in quantity. Google searches for “pumpkin beer” spike every year from late summer through the fall, exceeding searches for all other seasonal beer terms combined, as you can see in the graph below compiled by Brewers Association staff economist Bart Watson.

Watson says those searches really do correlate with the beers we buy and drink. In 2013, pumpkin beers led a surge in seasonal sales, which were lagging behind the ever popular India pale ale by about 125,000 cases going into that August. The release of pumpkin beers put seasonals at the front of the craft beer pack by 300,000 cases during September and October, and could do so again this year. 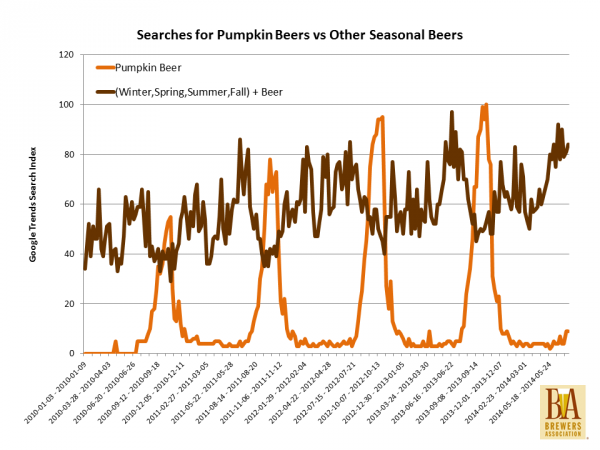 Here are just a few of 2015 pumpkin beers from small and independent craft brewers: