The Great American Beer Festival (GABF) is an amazing event for both attendees and brewers. Beer drinkers love that they are able to expand their beer horizons by tasting beer from 700+ breweries as they literally walk across the country (the festival is organized by region). Brewers look forward to GABF for many reasons, but one major draw is the competition.

The beer competition is a highly competitive event that is judged by a professional panel of 200+ judges from 10 countries. The judges conduct a series of blind tastings and judge each beer to the category guidelines. The judges then deliberate to award medals to the exceptional entries.

This year, 5,507 beers were entered and 268 medals were awarded. These beers will be recognized for years to come as the best from their category when it comes to criteria like taste, aroma, color, etc. And while all of the winners stand out as phenomenal beers, some of them are attention grabbers due to their names alone. 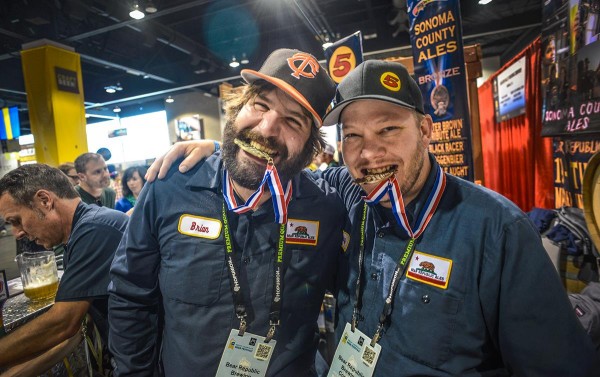 In 2013, we shared “10 Awesome Beer Names from the Great American Beer Festival,” and this year I have taken the liberty to find 10 more names that stood out to me as some of the greats! We might just have to make this a yearly tradition. Here are the amazing beer names in alphabetical order, including what medal they won in 2014:

Atalie Rhodes is the current Craft Beer Program intern at the Brewers Association. Her love of craft beer led her to becoming a trainer at Yard House Restaurants, but she is constantly seeking more beer knowledge. If she is not at a brewery asking a plethora of questions about their beer, she is probably out fishing, playing volleyball or reading one of her favorite books.

10 Awesome Beer Names from the 2014 Great American Beer Festival was last modified: December 1st, 2014 by Atalie
CraftBeer.com is fully dedicated to small and independent U.S. breweries. We are published by the Brewers Association, the not-for-profit trade group dedicated to promoting and protecting America’s small and independent craft brewers. Stories and opinions shared on CraftBeer.com do not imply endorsement by or positions taken by the Brewers Association or its members.