The craft beer landscape has changed dramatically in the past few decades, but one important tool, the Beer Flavor Wheel, has remained relatively unchanged since its inception in 1979—until now.

All five senses are utilized in the appreciation of beer, but the way it tastes, smells and feels are arguably the most important contributors to flavor—and also the most elusive to describe.

In an attempt to standardize the vocabulary necessary to communicate beer flavors, M.C. Meilgaard and his colleagues from the European Brewery Convention, the Master Brewers Association of the Americas and the American Society of Brewing Chemists joined forces in the 1970s to develop the Beer Flavor Wheel.

Although the wheel was a huge advancement in the standardization of beer terminology, Meilgaard and his team realized that it was only the beginning, and they issued a call-to-action to the brewing industry to continue their work as scientific understanding advanced. However, with only a few minor exceptions, the Beer Flavor Wheel has remained largely unchanged since its development almost 40 years ago.

Some of you may be familiar with the Beer Flavor Wheel. It’s similar to the color wheel in structure but filled with three tiers of flavor terminology intended to provide a common vocabulary for describing beer. The majority of the brewing industry recognize its shortcomings, but it wasn’t until an evening in September 2014 that anyone decided to do anything about it.

The Team Behind the Beer Flavor Map

A year and a half ago, two scientists, Lindsay Barr and Dr. Nicole Garneau, were discussing the Beer Flavor Wheel. Barr was explaining the history to Garneau, including Meilgaard’s initial request that the brewing community continue the work. The two looked at each other and thought, “Why not us?” Thus began their journey toward the Beer Flavor Map.

The two were uniquely situated to bring Meilgaard and his colleagues’ research up to date. Barr, who works as the sensory specialist at New Belgium, has her BS in biochemistry and molecular biology as well as an MS in food science and technology. She currently serves as chair of the American Society of Brewing Chemists Sensory Subcommittee and is a founding member of the Beer & Food Working Group, of which Garneau is also a member.

Dr. Garneau received her BA in Genetics and her Ph.D. in Microbiology, and currently is the curator and department chair of health sciences at the Denver Museum of Nature and Science. She specializes in sensory perception and the interactions of flavor attributes in pairings.

The End of the Wheel

Barr and Garneau’s original intent was to contemporize the wheel to reflect current scientific understanding, but as they began their research, they realized they needed to forgo the wheel structure for the tool to be both scientifically accurate and user-friendly. So they started from scratch.

They gathered together the original references used in the wheel, as well as numerous peer-reviewed sources that had been published over the past four decades. They then built a database of sensory and chemical flavors, checking it against other existing databases, until they had a comprehensive chemical list with common language descriptor terms. 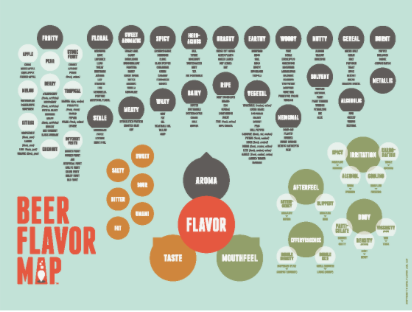 “From there we struggled with which face the Beer Flavor Map should take—the common descriptors or the chemicals,” said Dr. Garneau. “We elected to use the common descriptors to make the Beer Flavor Map useful to anyone that picks it up, no matter if they had sensory training. This structure allows more people to speak using a common vocabulary of beer flavors. The map bridges the gap for people to begin to associate the descriptive vocabulary with the chemicals.”

The Beer Flavor Map is, even at first glance, a vast improvement over its predecessor. Its design and organization make the information clear and accessible. Flavor is broken into three color-coded categories—Taste, Aroma and Mouthfeel—with each group of subcategories concisely depicted.

Contrary to the wheel, where “mouthfeel” was listed under the heading of taste, the Beer Flavor Map assigns mouthfeel its rightful place as a primary sense (as it is the sense of touch in the mouth).

The latest scientific developments in sensory knowledge have also been incorporated into the Map; for example, not only is umami included as a subcategory of Taste, but so is fat, which represents the newest recognized taste called oleogustus.

The aroma descriptors are scrupulously categorized, as the team made efforts to use scientific understanding, both chemical and taxonomical, to accurately and objectively form the clusters.

For those not involved in the day-to-day craft beer industry—and even for those who are—describing beer flavors is difficult. Meilgaard and his colleagues’ contribution of the Beer Flavor Wheel four decades ago helped to standardize the terms, but their design did not contribute to ease of use. With the Beer Flavor Map, beer professionals and craft beer lovers now have an easy-to-understand tool at their disposal for the complicated task of expressing flavor attributes.

The duo are also following up the Beer Flavor Map with a companion model to make the technical side of flavor just as accessible as the descriptive.

Of this endeavor, Barr notes, “We are really excited about immediately following up the Beer Flavor Map with a chemical companion. While we know the Map will help move the industry forward, there are also brewers and beer chemists out there who need the chemical side of sensory to help them find the root causes of off flavors, or need to dial in a specific yeast strain to reach a specific aroma.”

For breweries and homebrewers that want to take the next step of performing sensory analysis, but don’t know where to start, Barr and Garneau have also teamed up with 29Labs in a joint venture called DraughtLab. DraughtLab combines the descriptive and chemical sides of sensory analysis in an easy-to-use mobile application. The app will launch this August at the World Brewing Conference.

Stay tuned for these in-the-works innovations from the talented team of Lindsay Barr and Dr. Nicole Garneau. Until then, be sure to grab your copy of the revolutionary Beer Flavor Map, which will be available in early May at BeerFlavorMap.com.