It was Christmas. I must’ve been 10 years old. At the bottom of my stocking, underneath a teeth-rotting pile of candy, I found a small rectangular treasure: Megadeth’s “Rust in Peace“ on cassette. (Megadeth for a 10-year-old? Yep. My mom was cooler than yours.)

For the uninitiated, “Rust in Peace“ is a classic thrash metal album, once dubbed “the pinnacle of aesthetic and creative potential” by satirical news outlet The Onion, in what I can only assume was a rare moment of non-sarcasm.

I listened to it in my room with my little brother and felt some combination of confusion, terror and delight. I had no idea what was happening to my ears, but I liked it.

Perhaps it was the novelty. This didn’t sound like anything I had heard before. (Also in my stocking that Christmas morn was a Green Day album, but, I mean, who cares?). Or maybe it was the sense that the music came from a purer place than what I’d heard on the radio: this was music for the sake of music, not for the sake of the sale.

I have a strong suspicion that all this applies equally well to craft beer. There’s something exciting about drinking “extreme” craft beers. And small and independent brewers are nothing if not true to their vision. Brewing craft beer is an end in itself — all the better if you make a buck, but that ain’t what it’s about.

(MORE: Anthrax Gets a Beer)

So when I heard about Decibel Magazine’s Metal & Beer Fest, my damaged ears perked up, for these are a few of my favorite things. The first annual festival, which is happening this weekend in Philly, brings together metal bands and brewers who exemplify that same spirit.

[Holy sh*t! I get to talk to Albert Mudrian! My mom and my job are cooler than yours!]

CraftBeer.com: What makes a beer and metal festival a natural pairing in your mind? 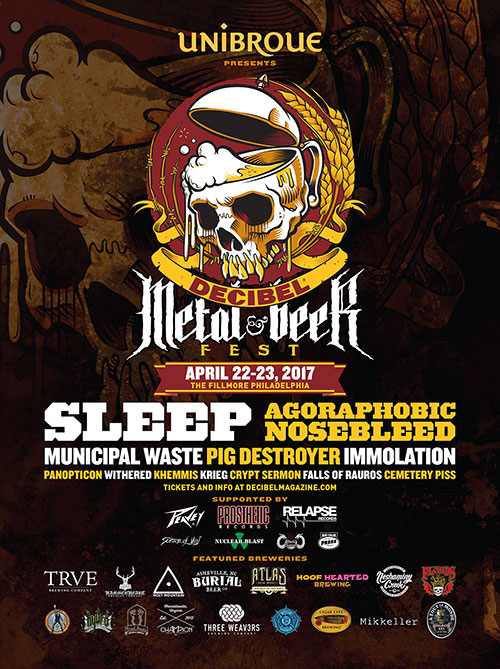 Albert: Heavy metal — and extreme metal, in particular — was never intended for mass mainstream consumption. It’s ultimately for thrill seekers. We realized that back in 2009 when we introduced our monthly craft beer column, “Brewtal Truth.” It was clear then that there was indeed crossover between the extreme beer and the extreme metal audiences. I was fortunate to have Adem Tepedelen as a regular contributor to the magazine. The year prior, he won the Michael Jackson Beer Journalism Award, so when he pitched the idea of the column, I knew he was someone who could write authoritatively on the relationship between underground beer and underground metal.

CraftBeer.com: Why might people who love metal also be into craft beer (and vice versa)?

Albert: Craft beer and extreme metal each developed because the mainstream versions of metal and beer simply were not delivering what the ardent fans of each wanted. Mötley Crüe is pretty much the Bud Lite of heavy metal [Author’s note: GASP!]; it has the impact of bubblegum music and the flavor of water. Thrash, death and black metal fans are always searching for something faster, something more extreme. It’s logical that would also apply to beer. Just as I am attracted to the heaviest guitar riff or fastest drum beat, I’m taken with the idea of discovering the most interesting, flavorful beer. Whether that means that highest ABV that goes to 11 [percent], or the lightest, tartest sour, I’m thirsting for the opposite of boring and predictable.

CraftBeer.com: Are there commonalities in the community that surrounds each?

Albert: Ultimately, beyond household names like Metallica and Black Sabbath, extreme metal is a niche culture—though it continues to grow little by little each year, while maintaining its original, rabid core fanbase. Craft beer now has … even more rapid growth than extreme metal has experienced in the last decade. It’s clear that both are moving in the right direction when you consider that I can get a six of Flying Dog at a shi**y gas station in Virginia, and Metallica directly referenced Norwegian black metal progenitors in one of their most recent music videos.

CraftBeer.com: What can one community learn from the other?

Albert: The metal community can sometimes be too competitive. After all, it’s a pretty small pie that everyone is trying to grab a piece of. But I think that the metal scene could benefit from taking a page from craft breweries, which collaborate so often, and so well, together. How about more split releases from labels, or some metal supergroups that don’t totally suck?! It’s more difficult for me to suggest what craft breweries should take from metal, but I would think maintaining a passion and being authentic are tenants that are vital to consumers of each.

The Decibel Metal & Beer Fest is April 22-23 at the Fillmore Philadelphia. Remaining tickets are available here.

Jay Wood is the former Craft Beer Program Marketing Assistant at the Brewers Association. Originally from Georgia, he loves 80’s hair metal, and he doesn’t trust you if you don’t.