The summer of 2013 will be one to remember for Epic Brewing Company. After brewing the first “shakedown” batch at their new Denver facility and winning six medals at four different beer festivals, it has truly been an “Epic” summer.

Because of their limitations in Utah, and their love for the Colorado craft beer culture, the duo decided to purchase a new 19,000 square foot brewery location in the River North neighborhood of Denver.

Rossman is excited about the new location and becoming a member of the tight-knit brewing community of Colorado. Epic Plans to open a 24-tap tap room in the fall are underway, and brewing at the new facility began last week.

Escape to Colorado IPA was the first beer to be brewed at the Denver location. The beer represents Epic’s move to Colorado and the escape from the regulatory environment of Salt Lake City and Utah. The classic IPA was brewed with American 2-Row, British Pale Malt and hopped up with Horizon, Mosaic and Simcoe hops. Escape will be available for distribution in 22-ounce bottles by July.

Although the tap room will not open until late August, Epic has already made connections with Colorado fruit farmers to find local produce to use in their famous Exponential Series that includes the Brainless Belgian-style fruit beers. 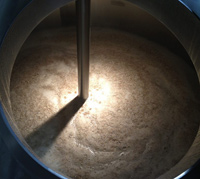 Epic plans to further embrace the Colorado beer culture by experimenting with a real ale program, and is busy sourcing local coffee roasters for its award-winning beer Big Bad Baptist.

When asked about the move and his thoughts on the success of the new brewery in Denver, Cole responded, “It’s gotta be Colorado, we couldn’t be more excited about the local support we have already received.”

Upon completion, the $2 million expansion of the Denver location will consist of a 20-barrel brew house with a 560-barrel fermentation capacity. Epic hopes to brew 30,000 barrels annually at the new facility.

Thomas Appel’s love for craft beer began after visiting a micro brewery at the end of the world in the Chilean Patagonia. He currently lives in the center of the beer world in Boulder, Colorado, where he is the intern for the craft beer program and a recent graduate from the University of Colorado. A native of the Sunshine State, Thomas can be found enjoying craft beer while getting lost on the beautiful rivers of Colorado!

Epic Brews in Denver was last modified: June 28th, 2013 by craftbeer
CraftBeer.com is fully dedicated to small and independent U.S. breweries. We are published by the Brewers Association, the not-for-profit trade group dedicated to promoting and protecting America’s small and independent craft brewers. Stories and opinions shared on CraftBeer.com do not imply endorsement by or positions taken by the Brewers Association or its members.