Some people wait all year to camp in line for Black Friday deals, while others wait in line for days to get tickets to a concert or movie they’ve been looking forward to. This February 6-19 the lines in Santa Rosa, Calif., at the Russian River Brewing Co. brew pub will grow for two weeks in anticipation of the 11th annual return of Pliny the Younger triple IPA.

Russian River says “it is higher in alcohol and has tons of hops. The alcohol should finish at about 10.25%, although it is remarkably dry for the amount of malt used in the recipe. It is loaded with hop flavors, bitterness, and aromatics. The hops used in this year’s recipe are of excellent quality from the 2014 harvest: Simcoe, Warrior, Chinook, Centennial, Amarillo, Northern Brewer, and Tomahawk.”

Named for Pliny the Elder’s nephew and adopted son, whose writings as an author and lawyer still have great historical value, the Pliny the Younger release is expected to be a party of epic proportions. Since its first release, The Younger has grown in popularity every year and has become a bucket list beer for many. With a perfect 100 overall score and a 100 for style on RateBeer.com and BeerAdvocate.com, this beer has a lot of hype and history to live up to.

If you are planning on visiting Russian River Brewing Co. this February for the Pliny the Younger release party, check out these details about the beer, the man and the event.

The brewery has also announced that they will begin distribution of Pliny the Younger to the surrounding areas the week of February 9. Kegs will be making their way to San Jose, Sacramento, Oregon, Colorado and Philadelphia sometime in February. 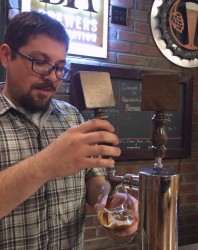 Pliny the Younger: A Bucket List Brew was last modified: February 9th, 2015 by CraftBeer.com
CraftBeer.com is fully dedicated to small and independent U.S. breweries. We are published by the Brewers Association, the not-for-profit trade group dedicated to promoting and protecting America’s small and independent craft brewers. Stories and opinions shared on CraftBeer.com do not imply endorsement by or positions taken by the Brewers Association or its members.