The Craft Beer and Cheese Style Guide are provided by the American Cheese Society (ACS). ACS provides the cheese community with educational resources and networking opportunities, while encouraging the highest standards of cheesemaking focused on safety and sustainability.

The term “fresh” is used to describe cheeses that have not been aged, or are very slightly cured. These cheeses have a high moisture content, are usually mild, and have a very creamy taste and soft texture. 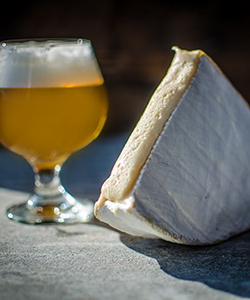 Semi-Soft Cheeses have little to no rind and exhibit a smooth, generally, creamy interior. These cheeses have a wide range of flavors from mild to rather pungent in taste.

Examples include many blue cheeses, colby, fontina styles, havarti and Monterey Jack. The vast variety of cheeses in this category can be paired with many different craft beers. When pairing, remember to match strength with strength.

This broad category of cheeses ranges from very mild to sharp and pungent. Hard cheeses generally have a texture profile that ranges from elastic at room temperature, to hard cheeses that can be grated.

Because of their variety, hard cheeses are easily paried with an equally broad range of craft beer styles. 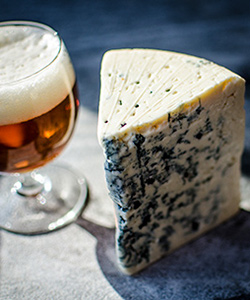 The term “blue” is used to describe cheeses that have a distinctive blue/green veining, created when the penicillium roqueforti mold, which is added during the cheesemaking make process, is exposed to air. This mold provides a distinct flavor to the cheese, which ranges from fairly mild to assertive and pungent.

Blue cheeses may be made in many styles, the most common being the French (roquefort), Italian (gorgonzola) and Danish blue styles. These stronger-flavored cheeses are most successfully balanced with stonger-flavored bolder beers like IPAs or imperial IPAs. 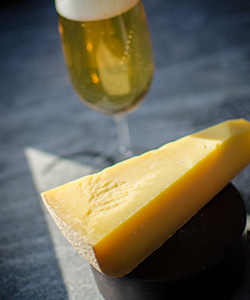 Unlike soft-ripened cheeses which are sprayed with a solution to encourage mold growth to produce a rind, natural rind cheeses develop rinds naturally during aging.

This category of cheeses include Tomme de Savoie styles which pair well with golden ales or blondes. Traditional British-style ales work well with English-style natural rind cheeses, such as Lancashire and Stilton. 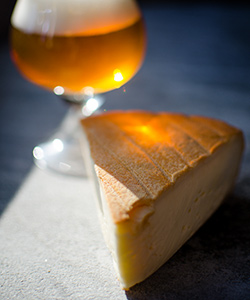 These cheeses are bathed in brine, wine, spirits or even beer which helps it to retain moisture and aids the growth of bacteria.

The cheese itself, while potentially pungent, is often creamy. Try Belgian-styles ales, like triples and golden strong ales with these varieties.