Enjoy Both Sips & Spooks at these Haunted Breweries

Glasses coming off shelves on their own. The sound of whistling when no one is around. Unexplained figures in the dark. Kegs moving and found unexpectedly in unusual places.

These occurrences and more have been reported at various haunted breweries across the country. If you believe in all things paranormal, visit one of these breweries for your next pint of beer.

Dark tourism has been a popular sensation for ages, usually spiking in the month of October right before Halloween. Travelers flock to locations with haunted histories, longing to experience some paranormal activity for themselves. Many places embrace the influx of visitors, often providing seasonal tours alongside themed items or activities.

The craft beer world is no different. Breweries across the country have noted unusual occurrences, unexplained sounds, and otherwise strange happenings. And the older the original building of the brewery is, the more stories there are to tell, which is why you’ll find more haunted breweries along the eastern coast of the United States. These breweries all embrace the phenomenon in different ways. Some offer beers named in honor of the spirits and tours of the historic premises. Yet others shy away from the attention, hesitant to admit there may be unusual forces at play.

The five-barrel pilot brewing system is located in what was once the embalming and preparation room. During construction to open the brewery, a few bones were discovered under the floor’s concrete and turned into the police. In honor of the departed, The Phoenix Brewing Company decided to name a series of wheat beers after them. John Doe is a standard American wheat, while Jane Doe, Barb Doe, and Juan Doe are infused with raspberry, rhubarb, and lime, respectively. Several other house beers reflect the history of the building. 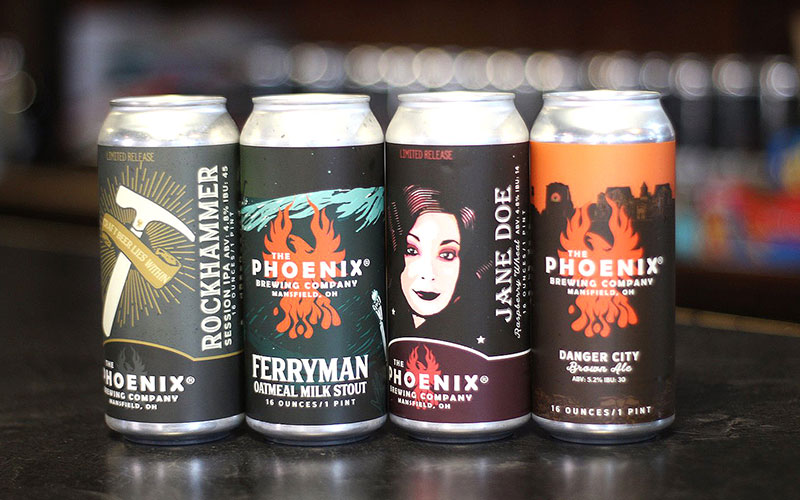 In the eight years that the brewery has been open, both customers and staff have reported several unusual occurrences. Guests have said they’ve felt someone brush up against them or bump into their chair, only to find no one there. Many paranormal enthusiasts have discovered orbs in photos taken throughout the building. Professional ghost hunters have recorded EMF (electric & magnetic field) activity and voices. One even claimed to connect with a male spirit, stating that the entity does not like beer, but is happy to have people in the building again.

How many spirits could be in the building is unclear, but one is known for certain. Charles Schroer, the original owner and operator of the mortuary, was diagnosed with a terminal illness. Instead of waiting for the inevitable, he chose to take his own life inside the building. Add to that the many people who came through the building after their earthly lives ended, and there are bound to be lingering spirits.

To maximize customers’ interest in its haunted history, The Phoenix Brewing Company offers ghost hunts by appointment. Carmone Macfarlane, head of creative & marketing, admits, “Being ‘haunted’ is an attraction. It does bring in new customers, especially around Halloween.” Many people travel to the nearby Ohio State Reformatory and often visit other haunted locations—like the brewery—while in Mansfield. The staff also loves to listen to their customers share their own ghostly experiences with people who are visiting the brewery for the first time.

Named after Declaration of Independence signer George Taylor, Taylor House Brewing Company is overflowing with history, located in one of the buildings from the former Milson’s Coal Yard dating back to 1897. Catasauqua, Pa. was a birthplace of America’s Industrial Revolution, after all—and with history comes lots of ghost stories.

Customers and staff have reported a wide variety of odd things occurring at the brewery. People heard a guitar string being plucked when no one was near the guitar. Others watched glasses shake on the shelves. One time, it was reported that a glass came off the shelf on its own, as if someone had pulled it off. Staff members often hear whistling, fingers snapping, and footsteps when no one else is around. Lights have flickered on and off.

Across the street from the brewery is George Taylor’s summer house, built on an old Native American burial ground in 1768. Staff members posit that ancient spirits may have been angered by the construction. Both reenactors and visitors to the house have reported strange happenings. Additionally, Taylor’s stepson drowned near the property, leading to questions about his lingering presence.

To honor—and play nice with—the spirits present in and around the brewery, Taylor House has brewed a beer in their honor. Madame Fantome, a Belgian witbier, has been on tap since the brewery first opened.

Going forward, the brewery has plans to expand. Tours of the property are being considered, which would complement the other tours in Catasauqua nicely. George Taylor’s home even has regular paranormal investigations.

With over 120 years of history, it’s no surprise that Saranac Brewery has some spooky stories of its own to tell. In 1888, Francis Xavier Matt established West End Brewing Company in Utica, N.Y. Over the years it’s held many names, including Matt Brewing Company and eventually Saranac, a Native American term meaning “cluster of stars.”

During Prohibition, the brewery was well known for its speakeasy—and for serving the first legal beer after Prohibition was repealed. Visitors to the brewery can step inside the former speakeasy on a tour of Saranac. Also on that tour is the portrait gallery, containing pictures of multiple generations of the Matt family. Staff members and customers alike report feeling uneasy while walking through the hallway, which is still decorated in early-1900s style. 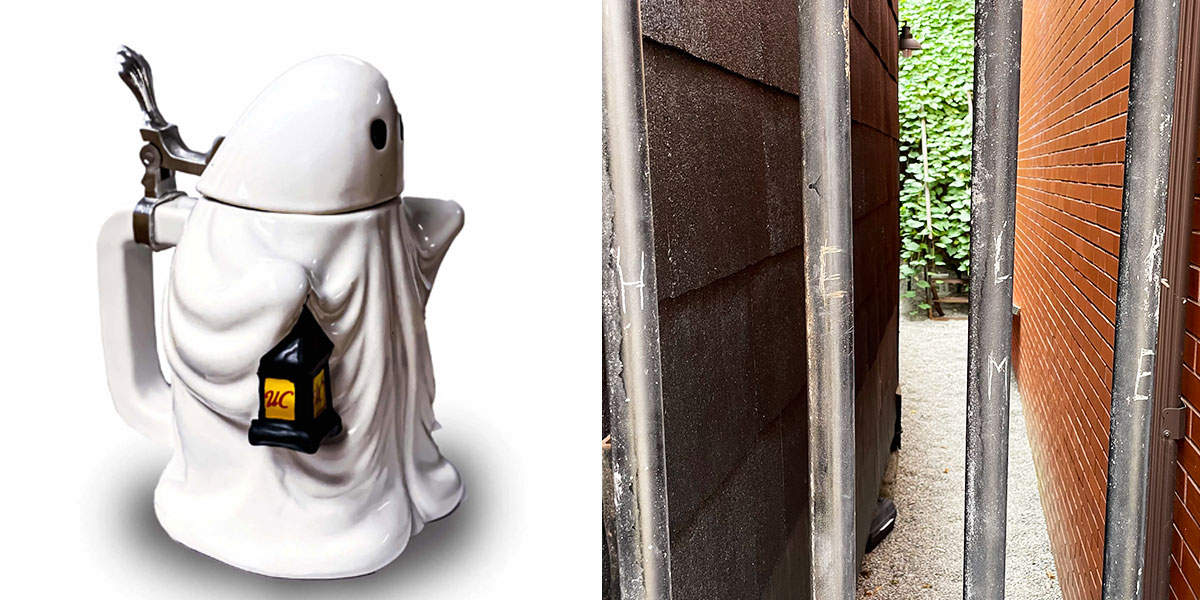 Late night and overnight staff also report hearing strange sounds and seeing figures in the shadows when no one else is in the building. Some workers are known to run through a passageway after turning off the lights for the night. There have been talks of doing Halloween-themed events in the future, but for now, patrons can settle for a collectible Brewery Ghost stein. According to the company, “There have been sporadic sightings of these sneaky characters throughout the brewery for years.”

Other Haunted Breweries in the United States

These three are just some of the haunted breweries scattered throughout the country. Many more exist—if you believe in ghosts, that is.

Moon River Brewing Company in Savannah, Ga. is said to have a lot of paranormal activity. Their website claims that it is “One of the oldest, most historic, and genuinely haunted buildings in Savannah.”

Many paranormal enthusiasts claim that NewSylum Brewing Company in Newton, Conn. is an active ghostly site, with its history as an old psychiatric hospital. But the staff is hesitant to admit to the presence of ghosts, stating they are “unsure” if the brewery is haunted.

One of the most notable haunted breweries is Wolfden Brewing in Bloomingdale, Ill. Built in 1851, the property was a Civil War farmhouse where multiple people died. Now, folks at the brewery say there are strange things happening all the time. Batteries drain unusually fast, beer ingredients fall off the shelves, and shadowy figures are seen moving throughout the building.

Across the country in Denver, Colo., Wynkoop Brewery claims to have a handful of ghosts lingering in the basement of the century-old brick warehouse. According to workers, the spirits aren’t malevolent, but the “sort-of-annoying-but-harmless kind.” Customers have also reported feeling a ghostly presence in the restrooms.

Enjoy Both Sips & Spooks at these Haunted Breweries was last modified: October 27th, 2022 by Danielle Benjamin

Danielle is an avid adventurer, foodie, and self-proclaimed nerd. After getting her master's degree in Australia, she moved back to Syracuse and started the blog Wanderlust on a Budget to share her stories and amplify diverse cultures. Danielle specializes in local tourism around Upstate New York, focusing on historical sites, obscure attractions, budget-friendly activities, and the best local food and drink. When she’s not writing or traveling, you’ll find her with her husband diving into their collection of 300+ board games, drinking craft beer, and hanging out with her dogs.