Winter usually signals the end of patio season, but for numerous breweries—even those in places where the temperature routinely plummets below freezing—that season is now year-round. While the pandemic pushed some breweries to get creative to keep guests safe, others already had plans in the works to appeal to hearty beer drinkers who enjoy the outdoors.

Regardless of the reason, keeping patios open in winter has become a wise business strategy. These four breweries are giving beer lovers a space to drink outdoors when the mercury dips.

Months before the pandemic hit in March 2020, plans were underway to double the size of the patio at Big Grove Brewery in Iowa City, Iowa. Big Grove’s founders envisioned the brewery’s massive yard as a music venue for beer drinkers. 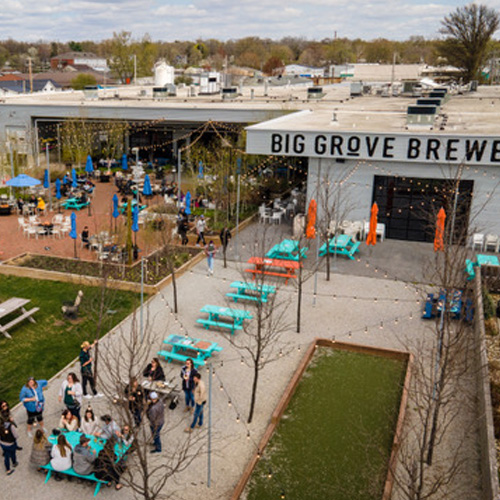 After Big Grove struggled to find its footing with that gameplan, it pivoted to improving its outdoor space. In January 2020, Big Grove unveiled a revamped patio space complete with 10 firepits.  “In hindsight, it was the smartest thing we’ve done because when May [2020] came, we were still under restrictions for indoor dining but had this massive outdoor space that doubled our footprint,” says Doug Goettsch, co-founder of Big Grove. The hardscape patio surface measures about 10,000 square feet, but total outdoor patio space encompasses over 20,000 square feet. “It’s given customers a safe space where they can socialize, and it’s been a monumental win for us.”

Big Grove also scored points by creating what staff calls the “fake patio.” A 16-foot overhang extends 24 feet from the garage doors, which are open in warm weather months. Last winter, Big Grove dropped a temporary wall from the overhang and placed infrared heaters in the area so that people could be outside, even though they were just feet from the taproom. “That was a goldmine for us last year, as it helped us recover some of the revenue we had lost during the early part of the pandemic,” Goettsch says. That space is open again this winter, and between its two outdoor areas and taproom, Big Grove can now seat about 750.

Of course, just because you build it doesn’t mean they’ll come, but Big Grove’s firepits are constantly cranking during the winter. “Surprisingly, we have people who are drinking beer out there in below-zero weather,” Goettsch says. It helps, too, that the brewery is situated on a snowmobile trail, and for snowmobilers who want to enjoy a pint without stripping off all of their gear, they’ve come to the perfect place.

Winter is no picnic in Fort Wayne, Ind., which is why Trubble Brewing had always closed its patio during the colder months Then the pandemic hit, and Trubble changed its tune. 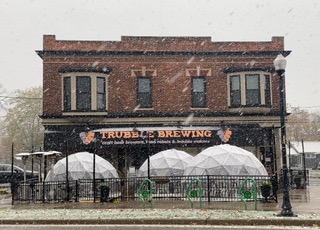 While taking note of what neighboring Michigan breweries were doing with their outdoor space during winter, it wasn’t until the pandemic hit that Trubble began investing in year-round outdoor seating, says Keli Hankee, co-founder and general manager. The solution? Heated geodomes, affectionately referred to as Trubble Bubbles.

The brewery didn’t originally start off with geodomes. Instead, it experimented with less expensive options, first installing outdoor tents with clear plastic sidewalls. Those wound up lacking the quality to stand up to commercial use, so last year the brewery replaced them mid-winter with pop-up style tents with sidewalls. However, snow load became a recurring problem.

This winter, Trubble found the perfect solution with geodomes. Three now sit on the patio, each one seating two to eight people.

Customers can’t get enough of the Trubble Bubbles, especially on Friday and Saturday nights. “They make eating out more of an event,” Hankee says. “It’s your own private space, kind of like camping but with better food.”

Although it’s been challenging for staff to provide the same full food and drink service in the bubbles as in the brewery, they’ve brought in more business. “We’ve seen a positive impact to our bottom line in the winter,” Hankee says.

More good news for Fort Wayne beer drinkers: the bubbles won’t burst when the pandemic ends. The brewery plans to bring them out every winter going forward.

When you’re on top of a mountain, it can get so cold that you’d consider seeking refuge in an igloo. Fortunately, if you’re at Bear Chase Brewing Company in Bluemont, Va., you now have six to choose from.

Bear Chase’s igloos, which are reminiscent of the aforementioned Trubble Bubbles, hold anywhere from six to 14 guests. “Without having to build another tasting room, we saw these igloos and thought they would be a great addition for our guests to enjoy the view and beer with a little more privacy,” says Chris Suarez, general manager.

The igloos, introduced last winter to appreciative guests, enhance the brewery’s existing outdoor space. When the chill sets in, Bear Chase has also been walling in its covered patio, adding heaters to keep guests warm. It also maintains seven fire pits in its front yard, along with a heated, tented area with TVs and a private bar. Called the Bear Cave, the event space is open to the public on weekends when it’s not being used for groups.

Beer and dogs are a natural pairing, something Sound2Summit Brewery in Snohomish, Wash., has long realized. Yet its dog-friendly patio was only open in the summer, and because of state laws, dogs aren’t allowed inside the brewery. Local pooches have the pandemic to thank, though, because the brewery just introduced its standalone, dog-friendly year-round patio. 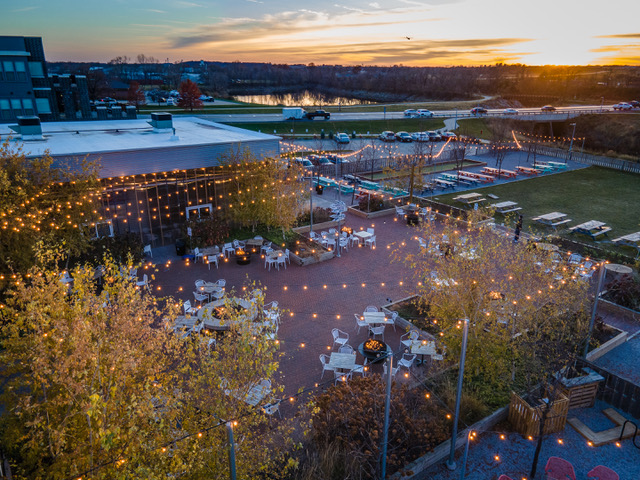 Truth be told, the patio wasn’t built specifically for dogs. The brewery started with two large tents, but they didn’t pair well with windstorms. The new patio not only serves as a formal walkway into the brewery, it also offers lighted, heated outdoor seating. “It provides a well-aerated facility for those who are at risk and don’t want to be inside a public facility,” says co-owner Doug Milnor. “It also provides a warm and comfortable environment for people who want to bring their pets.”

The patio houses a small portable firepit. Even during recent heavy snows, people were enjoying the warmth while sipping their beers with their dogs in tow—“just like at many of the ski resorts,” Milnor added.

Milnor anticipates that COVID fears will continue to drive people outside for the next couple of years, and of course, dog lovers will always be eager to put down a pint with their pup nearby. Milnor envisions the patio as a long-term addition to Sound2Summit, but he shares one tip: “Keep a couple of blankets in the car for your legs and have a blanket for your dog so they’re not lying on the cold ground.”

Pints on the patio, anybody? At these four breweries, the answer can now be yes, no matter what month it is.

Karen Asp is an Indiana-based journalist and author who writes for numerous publications, including Better Homes & Gardens, Real Simple, USA Today’s magazines, Forks Over Knives, TheBeet.com, Eating Well and Oxygen. She counts craft beer, especially IPAs, among her top passions (along with fitness, vegan cooking and animals) and seeks out breweries wherever she travels, beer being her favorite souvenir to bring home.