Boulder, CO • September 16, 2013-There’s more to a great beer bar than selection. To recognize the innovative and unique establishments where craft brewed beer is served, CraftBeer.com—the Brewers Association (BA) website for beer lovers—released its annual “Great American Beer Bar” list, as voted on by its readers. The list spotlighted both the top three overall vote-getting craft beer bars in the nation and the top three from each of five U.S. geographical regions. 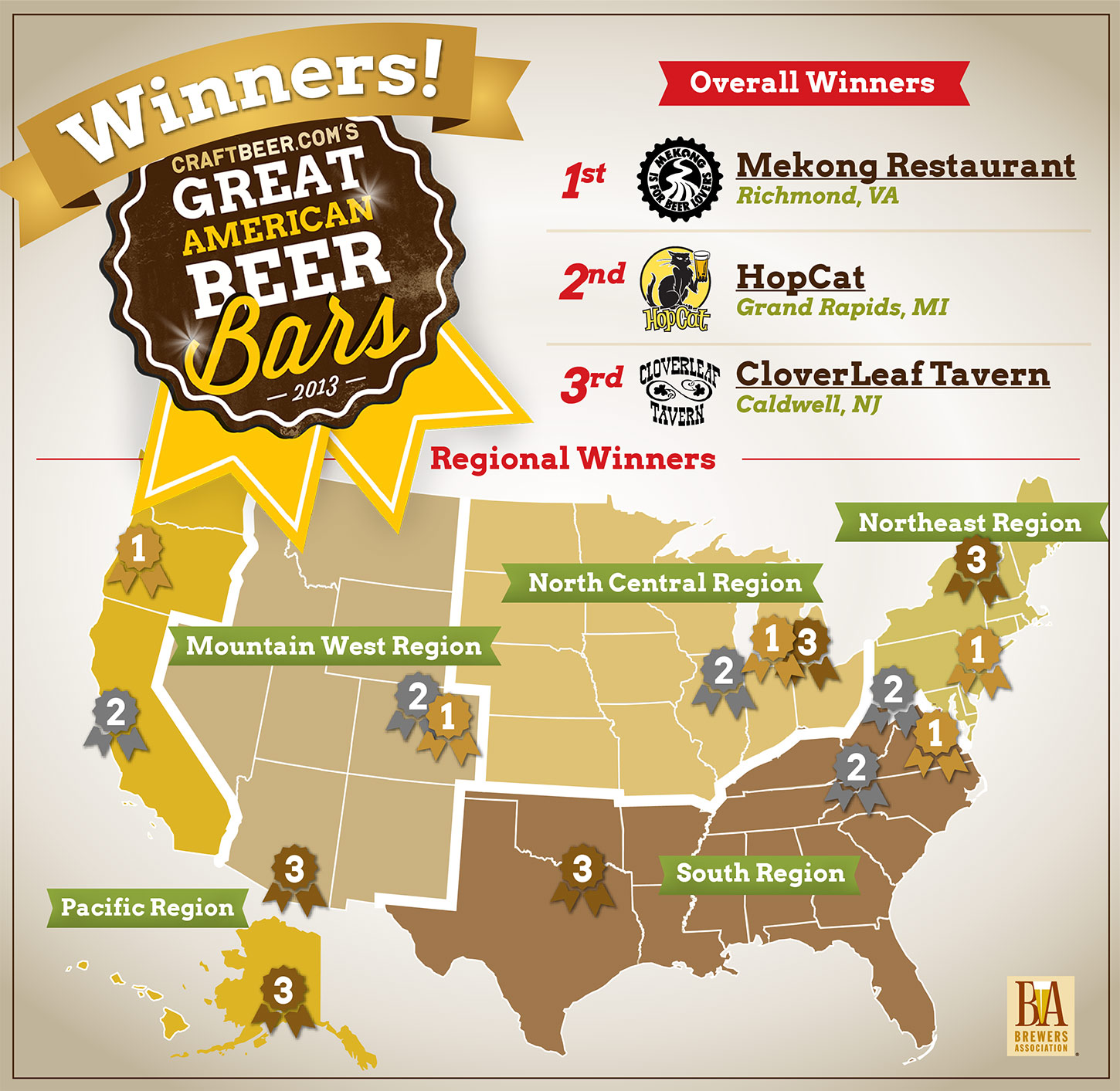 “In this second year of surveying beer lovers for the Great American Beer Bar competition, we’re excited to see both returning favorites and the newly honored,” said Julia Herz, publisher of CraftBeer.com and craft beer program director of the Brewers Association. “All of the participating bars in this contest are reflective of the diverse craft brewing movement. Their vibrant atmospheres parallel the passion and unique personalities that distinguish America’s small and independent producers.”

Established in 1995, Mekong is a second time overall champion of the Great American Beer Bar survey. The Vietnamese restaurant has a 50+ tap selection and over 200 bottle offerings of Belgian beers, American craft ales, sour, vintage and other special beer selections.

“Winning the Great American Beer Bar competition did not just mean a lot to us at Mekong, but to all of the loyal craft beer fans of Richmond, Virginia who we are fortunate enough to have as customers,” said An Bui, beer director of Mekong. “Richmond has one of the best craft beer cultures in the U.S. and continually tries to cultivate the beer religion in the area. We believe and stand by our motto that beer is the answer and are pleased to celebrate this honor with all of our local friends in town.”

Methodology: CraftBeer.com asked readers to nominate their favorite craft beer bars in the country, and received over 5,000 nominations, a 117 percent increase from last year. The choices were then narrowed down to the 10 most nominated bars in each of the five regions of the country. Over 37,000 votes were cast in total, a 23 percent increase from last year, resulting in the top three overall and regional winners. Voting was conducted from August 19 until August 30.

The Brewers Association is the not-for-profit trade association dedicated to small and independent American brewers, their craft beers and the community of brewing enthusiasts. The Brewers Association (BA) represents more than 70 percent of the brewing industry, and its members make more than 99 percent of the beer brewed in the U.S. The BA organizes events including the World Beer Cup®, Great American Beer Festival®, Craft Brewers Conference & BrewExpo America®, SAVOR℠: An American Craft Beer & Food Experience and American Craft Beer Week®. The BA publishes The New Brewer magazine and its Brewers Publications division is the largest publisher of contemporary and relevant brewing literature for today’s craft brewers and homebrewers.