Although, at first glance, it might seem like an unlikely combination, craft beer fans have known for years the beauty of a beer ice cream float—taking that first taste with reserved speculation and then letting the magical combination of dairy cream sweetness and rich beer goodness envelop their mouths.

Now, a few enthusiasts are taking that magic to the next level and putting beer in ice cream.

“Our first beer ice cream was Vanilla Porter, made with the Vanilla Porter from Breckenridge Brewery,” Basinger says. “We had that flavor available on the very first day that we opened, in 2009. We place an emphasis on using local ingredients, and since we live in one of the world’s centers for good craft beer, it would be silly for us not to take advantage of the great beers made here in Colorado.”

Like Basinger, Tyler Malek of the artisan ice creamery Salt & Straw felt that making beer ice cream seemed like a natural fit for a city with so many breweries.

“It all started with us moving here (from Seattle) and working with cooks and chefs in Portland—and realizing that the brewers are such an important part of the community,” Malek says. “I was inspired by seeing the combinations they created in their beers, and I realized that collaborating with them was almost mandatory for me to learn more about this artisan community.”

And collaborate he does. While most ice cream makers simply add beer as an ingredient, Malek actually brews with local brewers to make a special ingredient for his ice creams.

“We work closely with the brewers to make a beer syrup—a thick version of their unfermented wort that’s an exact replica of the beer,” Malek says. “It’s hard to get flavor with beer, and boiling down beer changes the hop and grain profiles. The cream also changes the flavor, so to get the true flavor, you have to add more beer, which changes the texture of the ice cream. So, the beer syrup helps us achieve that beer flavor without having to add too much beer.” 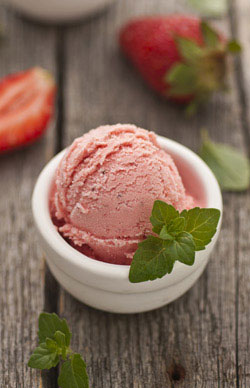 “We were looking at doing a maple-bacon ice cream,” says Malek. “I was enjoying one of Laurelwood’s Brown Ales and noticed the maple notes in the beer, and it got me thinking. To make the ice cream, we paired the Brown Ale with some candied bacon—and our first beer ice cream was born.”

For Ari Fleischer of Frozen Pints, an Atlanta-based ice creamery that makes beer ice creams exclusively, the concept of beer ice cream came to him truly by accident.

“We were having a barbecue, and a friend of mine happened to bring over an ice cream maker,” Fleischer remembers. “We’re all craft beer geeks, so of course we had some solid brews around. One thing led to another, and my buddy actually spilled his beer right next to the ice cream maker. I saw it happen, and it just kind of clicked—why not pour it in and see how it turns out? The first batch came out pretty tasty, so I picked it up as a hobby. Fast forward a few months, and I realized that I was actually onto something and decided to go at it full blast.”

Frozen Pints is now on track to be available throughout Atlanta this summer (2012).

While many of us might not want to go pro, making beer ice cream at home could easily become a summertime habit, er, hobby. For those who want to give it a go, these pros have a few tips on making your beer ice cream even better.

“You can’t make good beer ice cream from just any old beer—it needs to be flavorful and unique,” Fleischer says. “Take a trip down to your local craft beer spot and get a handle on some different flavor profiles. After that, it’s all about experimentation.”

Lisa Morrison, also known as the Beer Goddess, hosts “Beer O’Clock!” a weekly, hour-long commercial radio show devoted to craft beer, available in podcasts on KXL.com and on iTunes. She is a regular columnist for numerous beer publications and blogs, and was the first female recipient of the national Beer Journalism Awards. Her first book, Craft Beers of the Pacific Northwest was released in April 2011.

Lisa Morrison has been a craft beer evangelist for two decades. She's also co-owner of Belmont Station, a well-known beer store and beer bar in Portland, Oregon. She is conducting a lifelong study of the effects of beer on her own health. (So far, so good!)