Winter technically begins Dec. 21, but craft breweries are already releasing their 2017 winter beers to help you celebrate the season.

We asked small and independent brewers to tell us about the winter beers they’re looking forward to most. We have details on 10 of those beers below — and then scroll to the bottom of the page to see even more.

With hints of cinnamon, nutmeg, vanilla, allspice — and even a little candy cane for good measure — Bear Island Brewing’s Christmas in Your Mouth is aptly named. The brewery tells us it’s the first beer founder Beth Bechtel ever created, and she came up with the recipe while she was serving in the Navy on board the U.S.S. George H.W. Bush.

“She created this specific recipe to brew upon her return as it was set for early December, thus a winter warmer would be most appropriate,” the brewery explains. “Now this is the most popular seasonal that Bear Island Brewing Company makes each year.”

“One of our buildings has a much storied one-hundred-year existence. For many years, the brewery side was the home of the Snowflake Bakery, makers of fine breads, breadsticks and sweet rolls,” explains brewery founder Travis Peterson. “During the remodeling of the building, we recovered many bakery artifacts. It seemed fitting that we would pay homage to this celebrated community institution. Raise a glass for your local bakers!”

This Southern California brewery will see more sun than most of us this December, but that doesn’t keep them from creating a big holiday-inspired stout. Santa’s Little Helper is an imperial stout with an emphasis on dark cocoa and roasted coffee, with a finish that pairs well with those holiday cookies that have been staring at you.

“Santa knows who’s been naughty and who’s been nice, and this is one seriously naughty but nice beer,” says Port Brewing’s Marketing Director Adam Martinez.

This Western Michigan brewery goes all out for the release of Bourbon Barrel Aged Trippel Weizenbock, a 15% ABV beer with a ton of flavor. Brewed with a generous amount of wheat then aged in Four Roses bourbon barrels for one year, this strong dark lager will warm you to the core with flavors of dark fruits, smooth oak, vanilla toffee and bourbon. The brewery says it’s one of the top-rated Weizenbocks in the world. The release is set for the Livery’s December Darkness two-day party Dec. 8 and Dec. 9.

Cape May Brewing tells us its Concrete Ship is a “full-bodied bad*ss imperial stout.” This 10.5% winter beer has a velvety texture with rich notes of cocoa and coffee with a touch of heat coming through. It was named for the sunken SS Atlantus, a retired World War I concrete ship that you can see off Cape May’s Sunset Beach.

pFriem Family Brewers out of Hood River, Oregon, is releasing its Super Saison, a beer brewed to reflect the tradition of Belgian farmers to brew their strongest beers in winter. Super Saison is a 9.5% ABV farmhouse-style ale with notes of pineapple, kiwi and papaya.

As Your Soul is a brand new beer from Cheyenne, Wyoming’s brand new Accomplice Beer Company — and they’re stoked about this imperial stout winter release.

“This beer was my attempt to create a strong stout with intense coffee and chocolate notes but without adding anything to the beer other than malt. It came out fantastic!” Head Brewer Victor Gabriel tells us. “With an intense chocolate and coffee profile and a nice roasty backbone. I dare you to have more one then one.”

Santa Clara Valley Brewing’s Loma Prieta is an oatmeal rye imperial stout that serves as a base beer for two big winter releases: a Rye Whiskey Barrel Aged Loma Prieta and a Bourbon Barrel Aged Loma Prieta. The brewery says “deeply roasted malts are the epicenter of this beer.” You’ll be treated to bold malt aromas with a hint of coffee, dark chocolate and a touch of spicy rye malt. Both the whiskey and the bourbon variants are aged for 10 months.

High Water Brewing says if whiskey and beer had a baby, it would be Whiskey Thief Smoked Scotch Ale. Brewed with a blend of specialty malts, Beechwood and peat-smoked malts, housemade candi sugar and “dry-hopped” with heather, this winter release will fill your nose with hints of smoke, toffee, roasted nuts and dried flowers. Rich flavors of caramel and toffee bombard the tongue, then slowly break away to reveal a deep layer of smokey, peaty goodness. Whiskey Thief is a collaboration between High Water’s Steve Altimari and Alec Stefansky of Uncommon Brewers in Santa Cruz.

(READ: Breakthroughs in the Science Behind Malt Flavor)

Brewers at Sam Adams lovingly call this creation the “Christmas cookie of beers.” Named after a character from “A Christmas Carol,” this spiced brown ale is a full-bodied 5.9% beer with smooth malt character. You’ll taste flavors of sweet toffee, dark caramel and chocolate, along with spices like cinnamon, ginger and orange peel.

Check out even more 2017 winter beers in our graphic below. We color-coded the snowflakes by beer style. The key at the bottom of the image walks you through it. 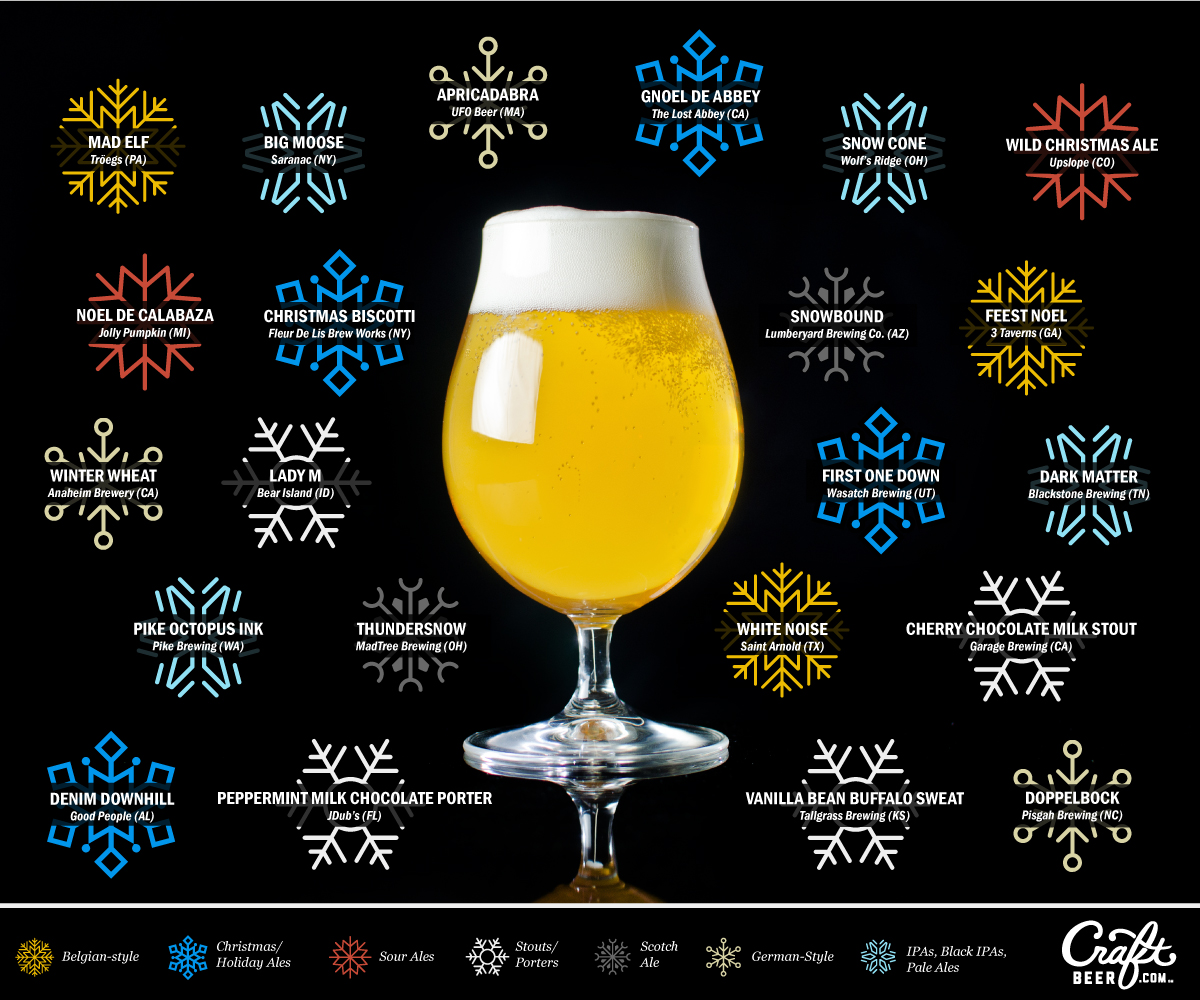 END_OF_DOCUMENT_TOKEN_TO_BE_REPLACED

These classic Christmas beers from craft breweries pair perfectly whether you’re looking to share a bottle with friends or enjoy as you’re decorating the house for the holidays.