There’s no doubt that Prohibition had an enormous impact on American brewers. The popularity and fascination with the topic continues to be celebrated and talked about every year on December 5 (1933), the anniversary of the ratification of the 21st Amendment which repealed Prohibition. The 18th Amendment, which made Prohibition law, was arguably the only amendment in the United States Constitution to restrict rights rather than expand them.

You can now download the new Ken Burns and Lynn Novick film, Prohibition, which aired in October on PBS. All three parts of the series shed light on where the movement came from, why it was such a big issue for Americans, and busts some myths about this “noble experiment.”

Having previewed the entire series, I was astounded by many things that accompanied this era. Here are a few of the themes I walked away with from the film.

(MORE: Big Beers to Keep You Cozy This Winter)

How Brewers Reacted to Prohibition

As for the brewers affected by Prohibition, well, they had seen the writing on the wall and needed to react simply to survive. Many switched to making ‘soft drinks’ or other non-alcoholic beverages. Some chose to retrofit their breweries to make other products and some simply shuttered and closed. It was surely a gut-wrenching time for the country’s small brewers who had been making their own American dream come true. Those who did rise from the smashed barrels had incredible stories to tell of how they made it through.

Ambitious Brew: The Story of American Beer, by historian Maureen Ogle is a great resource for a more in-depth look at the growth of the Temperance Movement, Prohibition and the recovery of the country after Repeal.

Prohibition Timeline  (for those of us who need a visual) 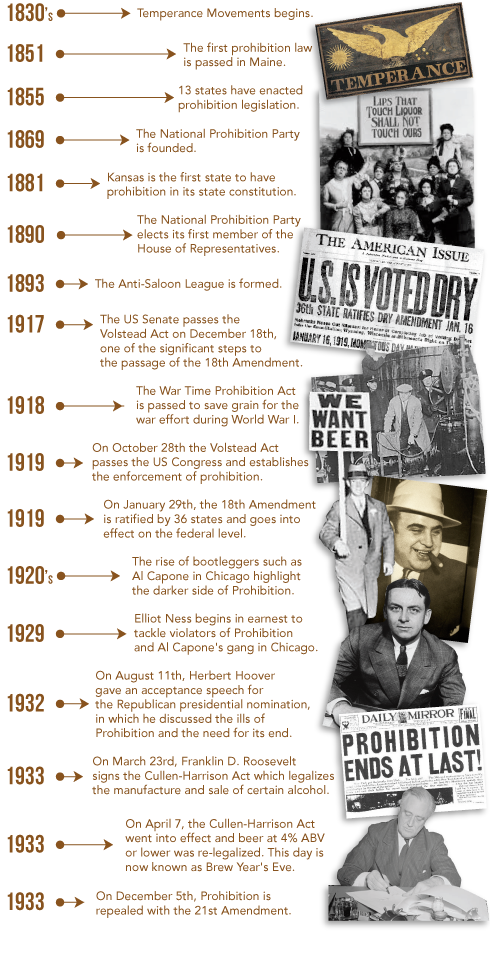 One thing to always and absolutely keep in mind is that craft beer is meant to be enjoyed in moderation. Alcohol is a privilege, not a right. There are many organizations in the U.S. who work to protect craft brewers, their products and your right to enjoy them responsibly.

Whether you’re an enthusiastic consumer, homebrewer, professional brewery, distributor or retailer, there are many clever ways to savor the flavor of craft beer.

Plan Your Own Repeal Day Party

However you decide to celebrate Repeal, this topic is a part of our permanent national fabric, so let’s celebrate legal American craft beer.

The views expressed in this Muse are solely those of the original author and do not necessarily represent those of CraftBeer.com or the Brewers Association.

Celebrate Repeal Day: December 5 was last modified: December 4th, 2016 by CraftBeer.com
CraftBeer.com is fully dedicated to small and independent U.S. breweries. We are published by the Brewers Association, the not-for-profit trade group dedicated to promoting and protecting America’s small and independent craft brewers. Stories and opinions shared on CraftBeer.com do not imply endorsement by or positions taken by the Brewers Association or its members.