How to Store Cork-Finished Beer

Cork-finished beer stands out on shelves. Just a little taller than the other bottles, there is something a bit more formal about them. Beers finished with a cork and secured with a cage are a sign of something special, a reminder of the wonderful fermented beverage’s bottled beginnings and an enticement to spend a few more dollars on a beer the breweries have deemed above average.

Only a small percentage of American craft breweries release beers in cage and cork bottles. Typically they are 750ml in size although some are larger or smaller. Often they are special anniversary beers, high alcohol content brews that will age and mellow well over time, or a unique recipe that a brewery wants to showcase.

More satisfying than a pry off top, cork-finished beers, like champagne and wine, open with a pop. An unmistakable sound that alerts the other senses and people in the room that something good is soon to come.

The experience is actually a little deeper than that, says author Randy Mosher who points out that cork-finished bottles “are a reminder to us all that beer comes from a place that has deep roots and shares more in common with wine than wine would like to admit.”

With the advent of metal bottle caps in the 1890s, many breweries abandoned corks for the newer, easier advancement in bottle sealing. This was readily seen—as it is today—among 12 oz bottles. Cork topped beers remained through the decades, but dwindled with the rising cost of equipment for the technology. 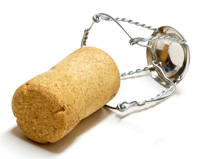 That is changing slowly. Corks are becoming more popular with American craft breweries, with some turning to local wineries that have bottling lines capable of inserting corks that have more in common with champagne than wine.

The Boston Beer Co. recently contracted a New York state winery to bottle Infinium, their collaboration beer with Weihenstephan in Germany. This was done, according to brewery spokeswoman Michelle Sullivan, because that beer needed specialty equipment to achieve a unique quality for the beer.

Where most cork-finished beers allow for some yeast or sediment to remain in the bottle, Boston Beer needed a bottling line that would leave Infinium clear and sparkling “like champagne” when poured into a glass, something their equipment could not do. Infinium is expected on shelves this month.

Last year, Sierra Nevada Brewing Co. installed a full cage and cork bottling line in anticipation of its four Sierra 30 series beers that were released throughout 2010. The line will be used to package the upcoming line of Trappist inspired beers that the brewery will make with members of the Trappist- Cistercian Abbey of New Clairvaux.

“Corks are much more tricky to work with, there are so many more variables to control; pressure, depth, speed,” said Sierra Nevada founder Ken Grossman. “Over the years we’ve been able to get our main production bottling line pretty dialed-in. Typically it runs smoothly and doesn’t give us much trouble. Our new crowns do a great job of keeping unwanted oxygen out of our bottles and the conditioning is pretty predictable. There’s something to be said for the corks, though. They make a beautiful package. The cage and cork bottles do a great job of making a special beer even more special.”

Cork-finished bottles also have a special place in the eyes of collectors and rare beer aficionados, who seek out beers like North Coast Brewing’s Brother Thelonious Belgian-Style Abbey Ale, Damnation and Supplication from Russian River Brewing and an ever growing number of releases from Maine’s Allagash Brewing.

When it comes to storing those cork topped treasures, Mosher says to keep them in a cool dry place that is not prone to wild temperature swings. A wine locker works, as does a basement.

It is best to store cork-finished bottles standing up, not on their sides as one would do with wine, said Ray Daniels, director of the Cicerone Certification Program. Wine needs some exposure to oxygen to mature and the corks help with that.

“We are sure that is something not desirable for beer,” said Daniels. “The ingress rate on corked topped bottles is five to six times greater than a crown cap. That means the beer will mature far more rapidly.”

He suggested that rather than keeping these bottles for the long haul, they are best consumed within a year and a half of having left the brewery.

Mosher, author of Tasting Beer: An Insider’s Guide to the World’s Greatest Drink, said by storing a corked-finished beer on its side there is a chance that the cork could contaminate a beer, something that in wine circles would mean an immediate refusal.

“In beer we’re a little more tolerant with that,” he said in a telephone interview from Chicago. “We would call it earthy.”

That said, it is not ideal or preferred taste with corked beers and proper care should be taken so one can enjoy the evolving flavors of a properly cellared cork-topped beer. Over time, flavors will typically mellow, drawing out malt characteristics, giving many beers what Mosher describes as “sherry-like.”

Some even develop a leathery quality, said Mosher that is “not for everyone, but I like it.”

In the end, “Corks are cool,” says Mosher but “they don’t really add anything to the beer, they are really just meant as a closure device.”

How to Store Cork-Finished Beer was last modified: April 14th, 2016 by John Holl