There is something poetic, almost romantic, about a freshly-poured pint of stout from a nitro tap. The cascading effect is mesmerizing; the waterfall of tiny bubbles slowly yielding to a dark brew with a fluffy, white head thick enough to float a bottle cap.

While nitro is normally associated with a certain brewery of Irish heritage hailing from Dublin, more and more craft breweries are embracing the nitrogenated method and adding such beers to their lineups. The number of bars adding independent (non-branded) nitro taps is growing as more establishments embrace craft beer and buck the traditions of larger breweries. 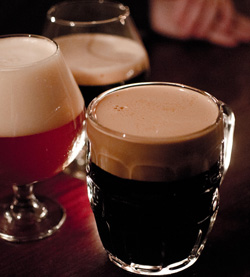 When people talk of nitro, it’s a reference to the type of gas used in the carbonation process. It means the difference between the creamier nitrogen beers (N2) and their lively, prickly CO2 counterparts. A typical nitrogenated beer contains about 70 percent nitrogen and 30 percent carbon dioxide.

Nitrogen is largely insoluble in liquid, which is what contributes to the thick mouth feel. This effect is helped by a special piece of tap equipment known as a restrictor plate that forces the beer through tiny holes before it lands in the glass. That process causes the “rising” effect that is topped with the head. And it’s really only the bubbles on the sides of the glass that fall. Inside they are actually rising, as typically seen with a poured carbonated beverage.

There is no official tally on the number of craft breweries that are producing nitrogenated beers, but because of the complex science (and secrecy) that goes into the canned or bottle offerings, most are sticking to draft.

One exception is Left Hand Brewing Company in Longmont, Colo., which has a Milk Stout as part of their regular lineup. Since the standard CO2 version of the stout hit shelves more than a decade ago, the brewery was working to figure out how to nitrogenize bottles.

“It took a whole lot of trial and error,” said Eric Wallace, Left Hand co-founder. “We started playing with widgets and kept pushing it closer and closer. The push was done by the packaging side of the company—Jake Kolakowski and Mark Sample—and they got it.” 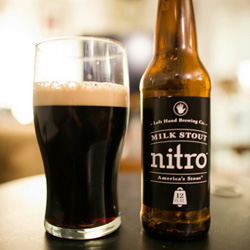 The brewery first released a bottled nitro version of Milk Stout to the public at the 2011 Great American Beer Festival. Sullivan and others pointed out that many breweries offer the same beer on both types of taps side by side. The difference between the two is vast, with the nitro beer taking on a creamy texture and more evenly distributed flavors while the CO2 beer is more aggressive on the tongue and aroma forward.

Sharp-eyed drinkers will notice that most, though not all, beers served on nitro tend to be more malt heavy than hop forward. Thus, more porters and stouts over India pale ales are typically found on nitro. “Historically, with grains the nitrogen just plays better,” says Thomas Vincent, the pub brewer at Natty Greene’s Pub and Brewery in Raleigh, N.C.

“Anytime with nitrogen, at least in my experience, the hops are faded,” said Vincent. “So, we tend to stick to maltier beers.” But he noted that in this age of craft beer experimentation nothing is off the table, and that “anything is possible.” He sees nitrogenated beers becoming more prominent—even those sticky thick double IPAs. One way this will happen is by more craft beer bars installing independent nitro taps.

Manufacturing companies are making this easier than ever before by affordable nitro lines for bars that want to stand apart from other establishments. While it was tough to find five years ago, it’s rare these days to find a bar that takes craft beer seriously without an independent nitro tap.

Sullivan, for one, is glad to see more nitrogenated beers on the market. “I love a beer with a nice head. Nitrogenized [beer] is so tight…and with the cascading it’s a beautiful specimen to me. It’s hard to be at a bar, see one being served, and not say, ‘my gosh that looks good.’ It’s appetizing.”

Be sure to check out part two of this series, “Good Beer Gas II: Nitro Beer Thrives” for a look at the latest craft breweries experimenting with nitrogenated beer.