It turns out that craft beer is not only music to the palate, but also possibly to the ears. According to a study recently published in the Frontiers of Psychology, music could be the next frontier elevating the sensory experience of full-flavored beer.

The study, titled “Music influences Hedonic and Taste Ratings in Beer,” was published in May and was conducted by Felipe Reinoso Cavalho, a Belgian PhD candidate at the Catholic University of Leuven. Cavalho specializes in the influence of sound on the tasting experience, which is serious business in Belgium. He consults with top quality Belgian chocolate and beer producers to create tasting soundscapes.

“We chose songs that can be used in order to have an enhancing effect on perceived flavor attributes, such as sweetness, bitterness, sourness, and alcoholic strength,” Cavalho told CraftBeer.com.

For the latest study, Cavalho and his team asked 231 beer drinkers to rate the influence of an English porter specifically formulated to reflect the soundscape of a song by the UK band Editors (they’re described as an indie rock band that plays dream-like, haunting music reminiscent of Pink Floyd). The study beer was a medium body porter infused with Earl Grey tea to yield citrus notes in contrast with the malty, chocolate flavored grains. It was paired with the song “Ocean of Night” from the Editors new album “In Dream.”

“The head brewer from The Brussels Beer Project, who created the beer formula that we used, considered the sonic and visual identity of a rock band as a source of inspiration while developing this beer’s formula,” explained Cavalho.

The researchers found the multi-sensory tasting group — those who sipped the labeled bottle while listening to the music — reported the highest level of enjoyment.

Pairing music with full-flavored beer is a strategy that Day Block Brewing Company in Minneapolis began deploying last year to draw crowds and sell beer at its music venue through its Bands that Brew program. A band works with Day Block’s brewing team to design a recipe that is served when the group returns to perform.

The monthly shows have helped the brewery achieve the most elusive of marketing goals: brand differentiation.

“It’s a nice way to work with the bands who play in our music venue,” said owner Jeff Hahn. “It gets them energized and gets their fans to come out to try the beer they brewed. To my knowledge, no other brewery anywhere has a similar program.”

Many of the musicians in the bands that have participated are either homebrewers or work in other breweries. The bands range from country to pop to heavy metal, including local and regional groups such as Kill-Me Kare Bare, self-evident and Fury Things. 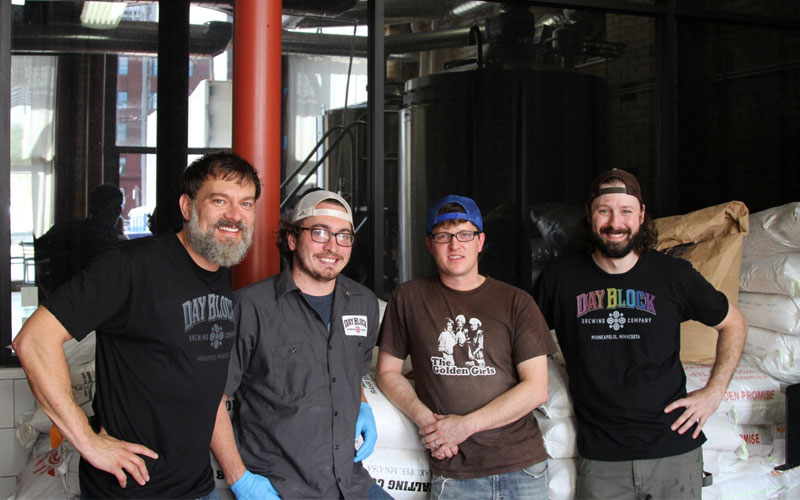 “The music fits their beer,” said Tuck. “Pop and rock groups tend to want pilsners and other lighter beers, while the metal bands favor IPAs or dark beers for their performance.”

Bands that Brew began as a labor of love said Jared Blair, a member of Kill-Me Kare Bare and Bands that Brew’s first musical director (he has since moved on).

“Bands just think brewing is the coolest thing ever,” said Blair. “It’s a really neat extension of the performance experience. The fans get excited to be listening to your music and drinking your beer. It feeds off each other and is very exciting for the musicians. I think it makes the performance better.”

Kill-Me Kare Bare, which plays pop and rock, made its second appearance in the program in September. Fellow band member Blake Stoppel, who has been homebrewing almost as long as he has been a musician, is working with current Day Block Music Director Brian McDonough to design a session peach IPA for the event.

“The beer we’re brewing gives our fans another reason to come to our concert. I have a little girl at home and as our fans also get older and busy with families and work, it’s not as easy to get to a concert as it was when we were all 21,” said Stoppel, the band’s lead singer and guitarist.

Blair gives credit for the success of Bands that Brew to owner Hahn for believing in the concept. This includes utilizing a 300-person venue above the brewery for larger bands.

“It took some money to start-up the venue to make it really good for bands,” he said. “And since I left, Brian McDonough has really taken it to the next stellar level upgrading the sound system.”

While the crowds at Day Block’s band nights continue to grow, Cavalho hopes to see more breweries take advantage of the science behind beer and music’s sensory relationship.

“We believe that beer and music go along pretty well,” Cavalho says. “We are going to continue researching on better ways to use sound in order to enhance a beer’s flavor.”