If German brewers are the masters of malt and Belgian brewers are the wizards of yeast, then American craft brewers are undoubtedly the kings of the hop. Despite its British colonial origins, no beer style is more closely associated with the U.S. than the India pale ale (IPA). To be even more specific, the West Coast—California, Oregon and Washington—has long been the emerald beacon of hoppy beers, but this trend appears to be changing.

The American IPA is not only one of the most popular craft beers among consumers, but over the years it has also been the most-entered style at both the World Beer Cup® (WBC) and the Great American Beer Festival® (GABF), the two most prestigious competitions for commercial brewers.

The pressures of popular demand have highlighted the agricultural vagaries of brewing hoppy beers as hops are agricultural products that vary from year-to-year, growing region-to-growing region and even from grower-to-grower in the same locality. As a result, brewmasters continually tinker with their American IPA recipes and their inventiveness has pushed the style in a myriad of unexpected ways.

With a history as murky as the waters it traveled from Great Britain to India, the IPAs current identity is far removed from its supposed origins. Alcoholic, hoppy and refreshing, the beers first sent across the globe were perfect candidates not only to mature over the course of the journey, but also quench the parched palates of British colonial officials. Not publicly referred to as India pale ale until decades after the sudsy shipments began, consumption thrived until the end of the 19th century when popular tastes gravitated towards weaker alcoholic and non-alcoholic alternatives.

American incarnations of the IPA have British immigrant roots in the mid-19th century, but it wasn’t until the 1970s and 80s, during the initial craft beer renaissance, that the style began to evolve into its current flavor and aroma profiles. Unlike British hops, which tend to be earthy, grassy and herbaceous, American cultivars exhibit bold bursts of citrus, pine, and, more recently, tropical notes.

According to Matt Brynildson, brewmaster at Firestone Walker Brewing Co. in Paso Robles, Calif.—three-time WBC Mid-Sized Brewery of the Year—the immediate history of the American IPA can be summarized in two generations.

From the 1980s until the turn of the century, Cascade, Centennial and Chinook were the defining hop trio of the style, with their classic shades of citrus coloring all aspects of the palate.

Since the 80s, much bolder varieties have been bred to accommodate our evolving tastes, and juicy, tropical, resiny and overbearingly citrusy hops, such as Amarillo, Citra, Simcoe and Columbus now tend to nudge more traditional varieties out of the way and distinguish today’s American IPA. 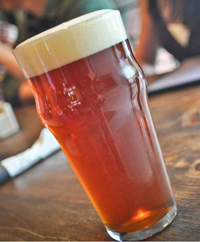 What Makes a Good American IPA?

While beer style guidelines are important when it comes to comparing beers in competition and discussing if a beer was brewed to style, guidelines can feel a bit sterile, generalized, and certainly don’t evoke the passion that is poured into brewing the best American IPAs in the world. So, for a more personal perspective on the characteristics that define this potent potable, let’s turn to three of the most eminent hop heads in the country.

As a former hop chemist, Brynildson knows a thing or two about Humulus lupulus, and he has a bouquet of medals to show for it. To him, American IPAs are “All about American hop expression,” meaning intense citrus and floral notes achieved not only through numerous hop additions during the boil, but also after fermentation is complete in a process known as dry-hopping.

His Nectar IPA and Union Jack IPA exemplify the generational differences within the style–the former is defined almost exclusively by Cascade, Centennial and Chinook, while the latter also includes pungent punches of Simcoe and Amarillo.

Brynildson’s hop blend for Union Jack IPA garnered back-to-back gold medals at GABF in 2008 and 2009, and if you’ve ever wondered why many Firestone Walker beers feature Centennial—it’s Brynildson’s favorite variety.

Jeff Erway likes to smell his IPA from the table, so when he brews it, he “sticks to the guidelines,” creating a craft beer that is “pungently bitter with enormous aroma,” that uses malt only to balance the vast variety of hop character. La Cumbre’s Elevated IPA won gold at the 2011 GABF and bronze at this year’s WBC.

To make more room in the boil kettle for numerous hop additions, Jeff uses not only pellet hops—dried whole hop cones that are crushed in a mill and then pressed into tiny, compact, green logs—but also CO2 extract, which is an even more concentrated, liquid version of hoppy goodness. Essentially, Erway sums up perfectly what American IPAs should be all about: “OMG hops!”

For Matt Cole, a good American IPA starts with “really good hops,” and since Fat Head’s Head Hunter IPA has won silver medals at the last two WBC compeititions, (beating out Erway’s Elevated IPA at the 2012 WBC), he might be on to something.

Cole has a fine touch for hops, as he hand selects many of them and works with growers to try to harvest hops at just the right time so they’re at their peak when they enter the brewhouse. Particularly fond of Simcoe, Citra and Centennial hops, Cole seeks out maximum hop flavor and aroma by adding hops to the mash, aggressively dry-hopping and not filtering his brew.

If Head Hunter IPA isn’t enough liquid proof of Cole’s hopping skills, his recipe for the beer will provide further written proof in Mitch Steele and Stan Hieronymous’ book on IPAs, For the Love of Hops.

Do American IPAs taste differently in California than Ohio?

The 2012 WBC marked the first time in a decade that no brewery from the West Coast big guns—California, Oregon and Washington—medaled in the American-style India pale ale category, while the same trend held true for the 2011 GABF. Instead, La Cumbre and Fat Head’s hopped into the winners circle at both competitions. Transportation, overall industry growth, and education explain these historic incursions.

According to the 2015 stats from Hop Growers of America, Washington (70.8%), Oregon (15%), and Idaho (10.9%) are the three main hop growing regions in the U.S. Given West Coast breweries’ proximity to these hop-growing hubs, it’s only natural their beers have traditionally accentuated these beautiful bines, while East Coast breweries’ lack of ready access tended to result in more malt-forward versions of the American IPA.

However, as craft beer’s popularity has grown throughout the country, supply channels have widened and it’s as easy for a brewer in Portland, Maine, to procure his precious pellets as it is for a brewer in Portland, Ore.—assuming a brewery has a hop contract in place and the varieties wanted are available. Pelletization of hops has made shipping and subsequent storage more compact and efficient, which has freed up space for more hops in both the brewhouse and the brew kettle.

At GABF and WBC, the American-style India pale ale category regularly attracts the most entries, usually exceeding 100, whereas other categories have around 30 or 40. One would be hard-pressed to find an American craft brewery that does not feature an IPA in its regular line-up, and Brynildson and Erway both attribute consumer popularity to the rising number of competition entries.

In fact, La Cumbre’s IPA is so popular, Erway devoted 3,000 of the 4,000 barrels he brewed in 2013 solely to this one beer, despite also offering four others in his regular line-up and several seasonal/occasional releases.

Beer drinkers’ palates have undoubtedly evolved over the years, embracing the bold, even experimental flavors of craft beer, thus fueling continued innovation across all styles, but particularly the American IPA. Craft brewers are already floating on this popular tide, and as hop breeding programs continue to cultivate even more intense and unique hops, a new flood of flavors is sure to permeate our palates in the future.

The Other Side of the Hop Cone

While it’s the craft beer lover’s job to savor and the brewer’s job to source our favorite libations, the latter should be just as important because consistently brewing the same beer, especially an American IPA, is a fine balancing act that relies as much on the brewers’ sensory skills as it does on the capricious character of Mother Nature.

Brynildson, Erway and Cole all continually develop their IPA recipes in their pursuit of perfection. Both for developing flavor and for safeguarding against such agricultural vagaries, our featured brewers use a blend of hops, up to six or seven different varieties, mixing and matching to find the cumulative hop character they’re looking for. When one hop is not up to snuff, such as a lack of tropical notes in a batch of Simcoe, the other varieties have to make up for it so that the whole American IPA becomes greater than the sum of its resinous parts.

Negotiating these natural nuances likely never crosses our minds as we sniff and sip our beer, but a brewmaster’s knowledge of a certain ingredient and the ability to recognize and make-up for deficiencies is an essential aspect of crafting delicious beers.

Hops are the green gold of American craft beer; prized for their vast variety of citrus, pine, floral, herbal and tropical aromas, as well as their gum-smacking flavors. In the right hands and in the right combinations, these cones can literally catapult craft breweries to the top among consumers and at commercial competitions.

Its overseas origins notwithstanding, the IPA is now decidedly American in craft beer character: big, bold and always evolving. Thanks to the talents of Brynildson, Erway, Cole and a host of other craft brewers, a traditional American IPA with tremendous hop aroma and flavor can be enjoyed almost anywhere in the country and craft beer lovers’ palates are all the richer for it.

Foreign yet approachable, like any good German beer, Kay Witkiewicz, is the head brewer at Twisted Pine Brewing Company in Boulder, Colorado.