There’s so much that goes into making a craft beer. Brewers make decisions about everything from hops to yeast to malt. Then there’s another important decision: What is its name? A beer name can do much more than simply convince you to try the beer. A beer name can make you laugh, scratch your head or even ponder your place in the universe. We asked craft brewers to tell us the stories behind these strange beer names.

The Sun Is Closer Than the Clouds | Launch Pad Brewery | Aurora, CO

A lemon meringue milkshake IPA might be seen as a bit ridiculous, according to Launch Pad head brewer Paul Mahoney. So when the Aurora, Colorado, brewery developed just such a beer, they decided to embrace the ridiculous. And they named it after “flat earth logic.”

“We’re a rocket-themed brewery so that comes into a lot of our names,” Mahoney says.

They’re also big believers in science, but for their more esoteric offerings, they turn 180 degrees and pull names from flat earth theory. In this case, a friend went to a flat earth convention in Denver. He brought back a pamphlet that included (among other phrases, some of which may appear in the names of future offerings) the expression “the sun is closer than the clouds.”

They were already considering a name that included “sun,” because it’s a lemon beer. They read this phrase and were sold.

What do customers think? “We think that people like to drink fun beers. Our customers have embraced the pseudo-mocking of the flat earth,” Mahoney says.

If you don’t recognize the origins of this name, you’re obviously not an H.P. Lovecraft fan, unlike Cross-Eyed Owl president Trey Atwood. Cthulhu is Lovecraft’s most famous creation, first appearing in the story “The Call of Cthulhu” in the 1928 pulp magazine “Weird Tales.” Congratulations if you can pronounce this without accidentally spitting on someone. Lovecraft himself pronounced it several different ways, with the most common being k-a-th-oo-l-oo.

Cthulhu, Atwood explains, is “…a deity spawned by the cosmos on a scale unimaginable to human kind. Our puny minds cannot fathom his origins and intent.”

It’s depicted as a green creature with scales and wings on its back. “When Chtulhu wakes up, the world will fall into chaos,” Atwood says.

So when Atwood was trying to come up with a name for his double black IPA, he thought of this legendary creature. “We’ve got this big black double IPA that’s so full of flavors and is a unique kind of thing that people don’t have very often. Green is often associated with hops. Black brought to mind chaos. So I thought [Cthulhu] was a good name for it.”

Makes sure you try it before Cthulhu rises and destroys the world.

Juicy, hazy beers are huge these days — except, possibly, in the Northwest.

“There’s a lot of us in the Northwest who are kind of resistant to the hazy beers,” says Andrew Rosette, head brewer at Thunder Island. “I was in that boat.” In the end, he changed his mind and decided to brew one, partly for the challenge and partly because of another reason.

Rosette often thinks up names for his beers while mountain biking in the Columbia River Gorge where the brewery is located.

He loves beers with stories behind them so in thinking about names for his new juicy beer, he began to ponder other fads that have come and gone. Thus he landed on pet rocks and moon boots (the latter of which he admits to having a pair of in the ’80s). Bouncing it off a few creative friends, he landed on the final name, “Pet Rock and a Moon Boot.”

Does this mean we have “Fidget Spinner Stout” or “Plaid Shirt Pale Ale” to look forward to?

“Happy to donut” came the reply, instead of “Happy to do it” as Bill had intended.

At the time, they were working on a chocolate stout finished on vanilla beans and cacao nibs, and as they teased Bill about his auto-correct mistake, they suddenly realized Happy to Donut would be a great name for the new beer.

Did you know that the bolo tie is the official tie of New Mexico? And that bolos and sterling silver jewelry (and silversmithing in general) are very important art forms for both Navajos and the Pueblo tribes in the area near Bow and Arrow Brewing?

Missy Begay does. The co-founder and branding and marketing guru for Bow and Arrow is Navajo and her brewery likes to describe itself as offering “a little Southwest and a lot of funk.” The latter word is crucial. It refers both to their focus on barrel-aged and sour beers, and to their general attitude.

This all comes together in Bolos and Bling, a dry-hopped, barrel-aged IPA with Brettanomyces.

“We thought it needed [a name that was] bold and funky,” Begay says. “The bolo tie is a big thing in the Southwest. It’s not unusual to see someone with a lot of turquoise jewelry on. That’s what we call ‘Southwest bling.'”

This commitment to their local area isn’t limited just to Bolos and Bling.

It Puts the Cucumber On Its Skin or It Gets the Gose Again | 7venth Sun | Dunedin and Tampa, FL

This one definitely wins the “I’m not sure if it’s creepy or funny” award (and the artwork won’t help you decide). Film buffs will recognize the name as a nod to the creepy — not funny — 1991 movie “Silence of the Lambs.”

It was created by a former employee “who’s brilliant and a very creative guy,” according to Devon Kreps, 7venth Sun president and general manager.

“He just came up with it — no process. We didn’t have any other options, ” Kreps says.

Which is good because Kreps points out that they often wait until the last minute to name things: “We want to taste the beer before we name it. We don’t want to name the baby before it’s born,” she says.

Kreps’ father created the memorable artwork and the customers love it.

“The people who love that beer really, really love it,” Kreps says.

668 The Neighbor of the Beast | New England Brewing | Woodbridge, CT

I love a good pun, so this cracks me up! 668 The Neighbor of the Beast is a Belgian-style golden ale brewed with both German and American hops, and fermented with La Chouffe yeast. New England Brewing has been brewing it since 2009 and the name originates in those early brewing days.

According to Craig Gilbert,current label artist at New England, “Rob Leonard (the owner), Eric Dickerson (longtime friend and volunteer), and me had to do something so as not to kill each other while we hand-canned hundreds of cans of beer in the early days. While talking about styles of beers that might be brewed, a Belgian ale was mentioned.”

Starting with Duvel, which literally means “devil”, a tradition has developed of giving golden ales names based on devils.

“Eric mentioned that if you lived next door to Satan, your mailing address would be 668 (666 being the Biblical ‘number of the Beast’).” That was it: the beer got its name.

I’ll admit it: I’m a Rush fan. (Rush, for those of you who aren’t or weren’t nerdy teenage boys, was a Canadian trio known for extremely complicated, often multi-part songs with dense, mythical lyrics.) When I saw that St. Paul’s Flat Earth has a beer called Cygnus X-1, I said to myself, “Please let this be named after the Rush song!”

Cygnus X-1 is a porter, but it’s not the only Rush-themed beer. “It’s the base beer,” says head brewer Bob Roepke. “We do a bunch of infusions with that beer, and have had like 20 versions all named after Rush songs.”

There’s a Limelight cherry cheesecake porter. Grand Design is marshmallow, chocolate and graham cracker. There’s even, be still my beating heart, a beer named after my favorite Rush song, Xanadu, which has absolutely no relation to the Olivia Newton-John song and movie.

The origins of Cygnus X-1 are with the first head brewer. A huge Rush fan, he heard that the legendary band was playing Minneapolis. So he decided to brew a beer for them in hopes of getting their attention. Thus Cygnus X-1 was born — and delivered to the band backstage. He never received word about whether Geddy, Alex or Neil enjoyed it.

“A lot of our names come from popular culture: songs, movies, TV shows,” explains Trevor Hayward, the owner of Evil Genius Beer Company. “#adulting is an internet thing that says ‘You’re an adult now and you have to do these things you don’t want to do but have to do anyway.'”

The beer #adulting is a guava IPA that Hayward describes as “approachable, not super low in ABV but not super high.” It’s one of their most popular beers. Hayward believes it will eventually surpass Stacy’s Mom (yes, named after the Fountains of Wayne song) to become the brewery’s biggest seller.

“People love our beer names. [They] like to feel that they’re in the ‘club’ and know what the names mean, and if they don’t they look it up,” Hayward says.

This one should come with an “excessive cuteness” warning. It’s certainly the best back story I heard.

The story begins in February 2014 when Black Rock (a now closed Chicago beer bar) hosted Off Color Brewing for an event to benefit the Wright Way Rescue, a nonprofit animal adoption center.

To help encourage people to adopt pets, Off Color renamed every beer they poured that night for adoptable pets. They also released one new beer, a hibiscus gose called Sparkles Finds (Some) Trouble. Sparkles was a 2-month-old kitten who was looking for a forever home at the time.

The name not only referred to Sparkles but also to the mischievous nature of cats and the fact that the beer was a variation on another Off Color gose called Troublesome. Sparkles Finds (Some) Trouble become a yearly Off Color staple.

The story doesn’t end there. In 2018, Off Color launched a search for Sparkles.

“We want to know how Sparkles is doing, tell her about her fame, and maybe even give her parents a case of her beer,” says Ben Ustick (who’s title on LinkedIn is “cat outreach”).

They published an Instagram post that included a sketch of how she might look, her last known photo and the beer label. “Unfortunately, we were unable to locate her.”

Have you seen Sparkles?

(READ: Music to Your Beers: When Bands and Breweries Collaborate)

Major consumer brands put enormous resources into developing product names. Maybe they need to take a page from the craft brewing industry. Just head into the taproom with a sample of the product — and an active imagination. 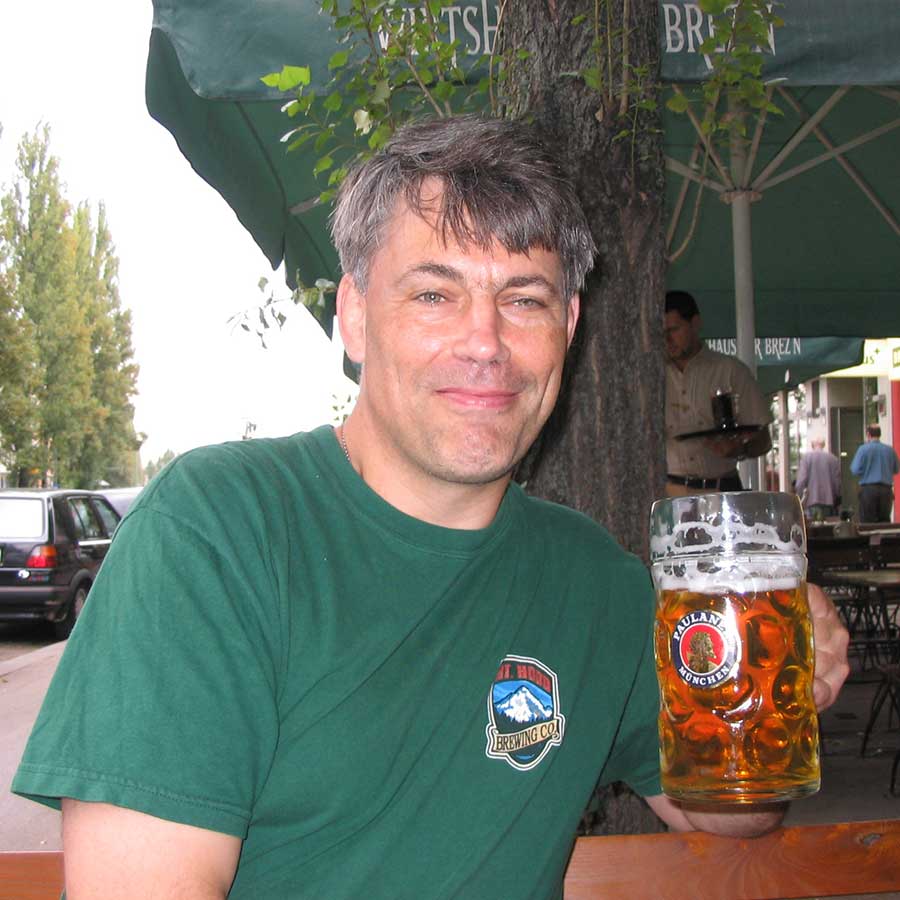 Keith Moore drank his first craft beer in 1984 and hasn’t stopped since. He lives in Boulder, Colorado with his wife, Ulla, and non-beer drinking dog, Cardigan, where they spend their spare time skiing, hiking and traveling.