Spent grain, the leftover malt and adjuncts after the mash has extracted most of the sugars, proteins, and nutrients, can constitute as much as 85 percent of a brewery’s total by-product. Craft breweries all over the country have devised innovative ways to prevent their spent grain from going to waste.

While agricultural uses of spent grain predominates—usually in the form of compost or feed—there are many new revolutionary uses, including powering an entire brewhouse. Alternative uses of spent grain underscore the craft beer community’s commitment to creating a sustainable product that lingers in our sensory memories, not our landfills.

From Foam to Farm

While breweries such as Twisted Pine Brewing Co. and Hangar 24 Craft Brewery employ “farm-to-foam” approaches in creating seasonal beers using local ingredients, many others give back the bulk of their spent grain to their agricultural communities—from ”foam-to-farm” so to speak.

Oftentimes, craft brewers merely have to haul their spent grain a mile down the road to their very own farms. Larry Chase of Standing Stone Brewing Co. in Ashland, Ore., feeds over five dozen chickens of various heritage on the grain from the brewery. They also distribute their feed into “grain beds [that] will transform into beautiful soil beds for planting future Standing Stone special fruits and vegetables,” according to Chase.

Rather than schlepping spent grain to their animals, Joleen and Brian Durham’s “girlfriends”—their twelve head of cattle—eagerly anticipate brew day at Piney River Brewing Co., located on an 80-acre farm in south central Mo., in the heart of the Ozarks. Already enticed away from their field by the sweet smell of mash, “They get as close as they can and moo for a bucket load of grain,” said Joleen Durham. “The girls are actually quite pig-like in their love for spent grain.” Despite the nation’s most widespread drought in six decades affecting farmers everywhere, Piney River’s “girlfriends” remain in prime shape thanks to their regular post-mash meals. 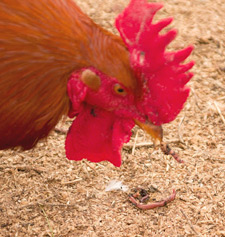 From the Ozarks to the Great Smoky Mountains and the Rockies, spent grain nourishes a variety of four-legged creatures. Blackberry Farm Brewery in Walland, Tenn., part of a luxury resort and hotel, only produces three Belgian-style beers, but their grain feeds chickens, sheep, llamas and pigs, which, in turn, provide eggs, milk, wool and meat for patrons.

Arvada Beer Co. and The Fort Collins Brewery, both in Colorado, look out for an animal that may be closer to your heart, namely your pet pooch. Arvada Beer Company donates some of its spent grain to a local dog biscuit bakery, while The Fort Collins Brewery bakes dog biscuits in their adjoining restaurant’s kitchen for local family friends. Beyond invigorating your parched palate, your pint sustains pets, livestock, and the livelihoods of craft brewers in and outside the brewhouse.

From Foam to Plate

Many craft breweries re-use their spent grain in their own kitchens, so in some way the beer you’re drinking might also be on your plate. Gravity 1020, the tavern of The Fort Collins Brewery, bakes bread using their leftover 1900 Amber Lager and Chocolate Stout grain, while Blackberry Farm bakes bread in one of their kitchens. Meanwhile, Standing Stone’s restaurant uses the eggs their spent grain-fed chickens lay in desserts, quiches and breakfast dishes.

Of course, if they can do it in their kitchens, you can do it in yours! Whether you’re a homebrewer or just interested in working with a neat new ingredient, your local brewery will mostly likely gladly provide you with the spent grain you’ll need. A craft beer dinner party would be a perfect time to wow your friends and family with pairings of your favorite brew and a dish that incorporates spent grain, and The Brooklyn Brew Shop has all the inspiration you need. Their Spent Grain Chef showcases nearly two dozen recipes, and provides an in-depth explanation on how to dry your spent grain, which is essential for maximizing its use in a variety of sweet and savory dishes. A dash of resourcefulness goes a long way in turning your beer from liquid bread into a full meal.

From Foam to Flora

Spent grain’s greatest potential, however, lies in its ability to provide food for an entire community. Composted, spent grain fertilizes fields, gardens, and urban greenhouses across the country, thus providing people with nutritious, natural foods. As part of their broader sustainability initiative, Reuben’s Brews donates their spent grain to Seattle Tilth, a non-profit organic gardening and urban ecology organization, which uses the grist to grow mushrooms. Apparently spent grain is rich in nitrates and sulfates that allow fungi to flourish.

Milwaukee Brewing Co. gives their spent grain to Growing Power, a national organization that helps provide equal access to healthy foods and hands-on skills in growing them. Once up and running in 2013, Brewery 85 in South Carolina will partner with The Generous Garden to grow food for local churches and food banks. Furthermore, Brewery 85 plans to cooperate with nearby Clemson University’s agricultural department to one day grow new grain from the spent, composted matter. One craft brewery’s waste can turn into an entire community’s wealth.

From Pint to Power

If your nearest farmer or community garden is already inundated in spent grain, innovation is the watchword, and Alaskan Brewing Co. found just the right solution. By developing “a first-of-its-kind biomass steam boiler,” fueled entirely by their spent grain. Ashley Johnston of ABC estimates that “The new boiler will completely eliminate the brewery’s use of fuel oil in the grain drying process, and displace more than half of the fuel needed to create process steam for the brewing process.”

In turn, this boiler will lead to “more than a 60 percent reduction in fuel oil use in the first year, and, with moderate growth assumptions, this translates to a fuel savings of nearly 1,500,000 gallons of oil over the next 10 years,” Johnston states. “As the brewery grows, so does our fuel source, leading to even more savings.”

With this technology, ABC is taking sustainability to a new level, using their raw material waste to power their day-to-day brewing operations, thus creating a perpetual loop that conserves energy, saves money and is readily available. Of course, not all craft breweries can afford to invest in such technology, but necessity is the mother of invention, and ABC’s solution is a model reminder of what can be done in the realm of alternative fuels.

Craft breweries all across the country have different methods of dealing with their spent grain once most of the sugars, proteins, and essential nutrients have made their way into the sweet wort that soon will be your next pint. Agriculture is an obvious, but venerable application, and many craft brewers use their own spent grain to fertilize their fields and feed their farm animals. Cooking with the leftover grist for the immediate satisfaction of a tasty meal, or composting the spent grain and eventually using it to grow food for an entire community are simultaneously sustainable and altruistic ways to dispose of breweries’ raw material waste.

Using spent grain to fuel your own brewhouse, like ABC, is the ultimate sustainable solution to literally keep your brewery running. Sustainability is a hallmark of the craft beer industry and every brewery is doing its part in its own way.

Foreign yet approachable, like any good German beer, Kay Witkiewicz, is the head brewer at Twisted Pine Brewing Company in Boulder, Colorado.