Tactical Tasting: How to Harness Your Sixth Sense

Enjoying beer is a total sensory experience where all five senses go into our enjoyment of the beverage. We see the beer. We smell the beer. We touch the beer to our taste buds. We even listen to the carbonation escape when we open a can or bottle (listen to a glass being poured from draft and can even hear the sound it makes when we gulp down a mouthful of IPA).

But it may blow your beer-lovin’ mind to know that, in addition to the five senses, you are experiencing a synthetic sixth sense every time you wash that delicious ale or lager down your throat.

(LEARN: What Beer Goes Best with My Meal?)

Nope. Every time you drink a beer, you summon a hidden sixth sense; your Spidey sense, if you will.

So what is it? The ability to know when someone is lurking around to steal your beer? Unfortunately not. It’s the ability to identify flavors.

Honing in Your Sixth Sense

For any of you that think that you taste flavors on your tongue, I have news for you. Your tongue’s taste-buddies are really only able to identify five known tastes: sweet, salty, sour, bitter and umami. There might be a few more for science to confirm, but currently, our palates have been proven to recognize these five.

Taste buds are only doing part of the work. When you drink a craft beer, your olfactory glands — responsible for collecting aromas and sending them off to the brain to be identified — are also making magic happen. A common way to demonstrate this is the cinnamon candy test that the Cicerone Program recommends. If you plug your nose and pop a cinnamon flavored candy into your mouth, what do you taste? Then when you unplug your nose, how does that change?

If you are fresh out of Hot Tamales as you are reading this, let me explain: By plugging your nose, you cut off the aroma portion of flavor. Thus, the only thing you should be able to perceive are the basic tastes, in this case sweet, because sugar is sweet and candy is made out of sugar. Once you open your nose, the volatile aromas flood through your retronasal passage (the back of your throat through the mouth in sciencey speak) and the perceived aroma combines with your tongue’s taste messages to synthesize flavor in your brain. That synthesized sense manifests as the cinnamon flavor on your tongue, but your tongue is only really reporting the sweetness. Without smell, taste is somewhat limiting. 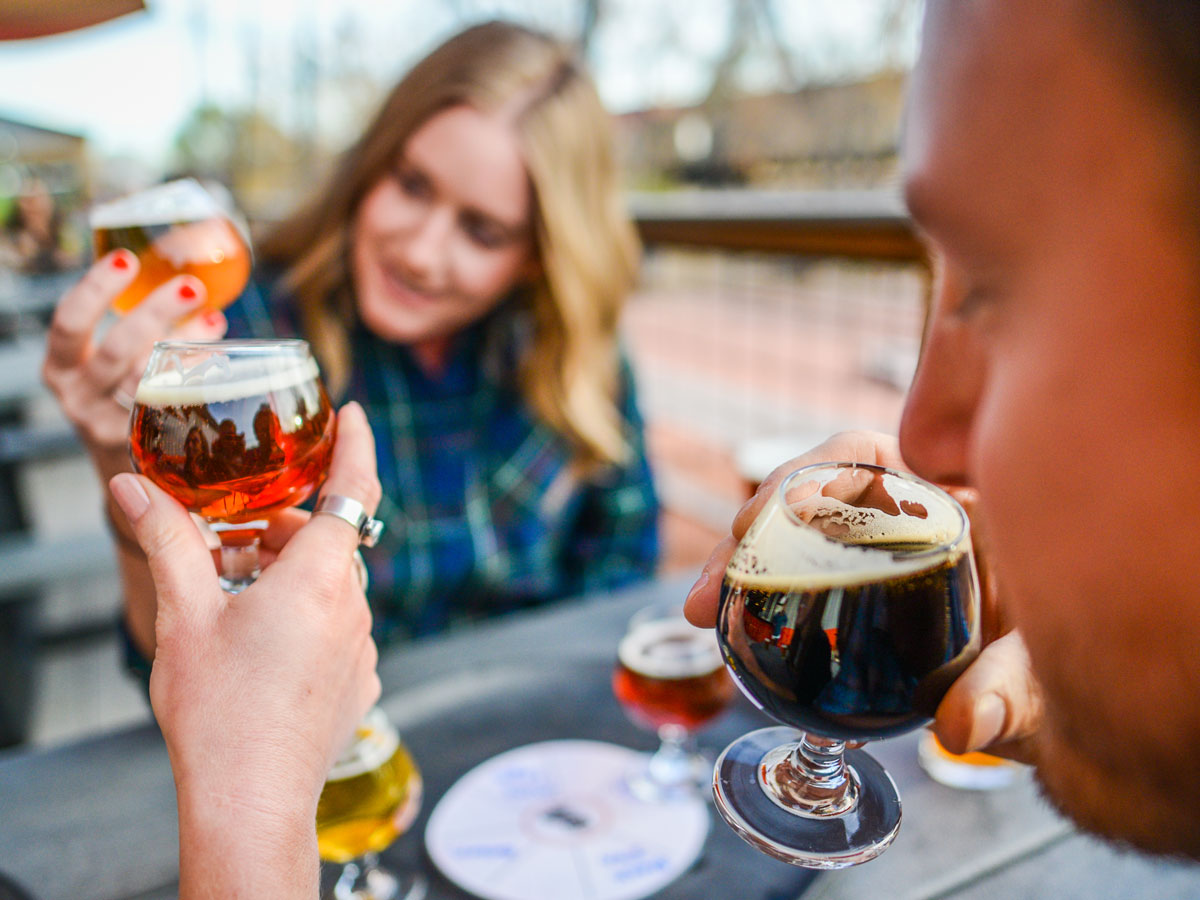 The human nose is a super specialized instrument. We give dogs a lot of credit for having great noses, but their noses work very differently from ours. Much of their smell is ortho-nasal (science speak for through the nostrils). Ours work very well from both the front and back of the nasal passages. We might not be able to follow the trail of a missing hiker with our nose, but our nose provides a ton of information that among other uses helps us identify and enjoy things we put in our mouth, like delicious and super flavorful American craft beer.

Despite the advanced power of the super specialized instrument known as our nose, like any tool, sound technique and upkeep will help it work at its highest potential. Melissa Antone of CaraTechnology, makers of Aroxa, reports that there are close to 200 chemicals that determine flavor in beer. Antone uses Aroxa’s flavor kits to train breweries on the right techniques to identify these compounds in beers. These sensory science tools and practices aid breweries in identifying positive flavor attributes to highlight in marketing, negative compounds to troubleshoot and even how to adjust hop usage or decipher shelf life of beers for quality and consistency. She shared some of her tasting tactics recently to a sensory class at the Brewers Association, the parent organization of CraftBeer.com. These techniques are common ways to get the most out of your Spidey sense and hone the powers of your other senses.

Aroma combines with taste to be perceived as flavor in our minds. Think of aroma compounds as little balloons that escape the beer and burst once they hit a certain altitude. By covering the escape of those bubbles and swirling the glass, we concentrate those aromas. That makes it easier to saturate your olfactory with those aromas once you remove the cover and take a sniff.

Use this tactic to perceive fruity esters and spicy phenols like the ones that are so important in the make-up of a German-style hefeweizen. The off-flavor of diacetyl should be evident enough for you to perceive without the need to cover the glass. Swirl and take a few short sniffs. Diacetyl is said to be reminiscent of fake buttered popcorn or butterscotch candy. Some people are nose blind to diacetyl, but the compound can also be slick on the palate, so if you cannot smell it, you might be able to feel it.

Sulfur compounds like DMS (cooked corn, tomato soup flavor) can be strong, so the fly-by method is useful in avoiding a harsh burst of sulfur. By moving the sample past your nose, you gain a perception of the aroma without ruining your sense of smell, temporarily. 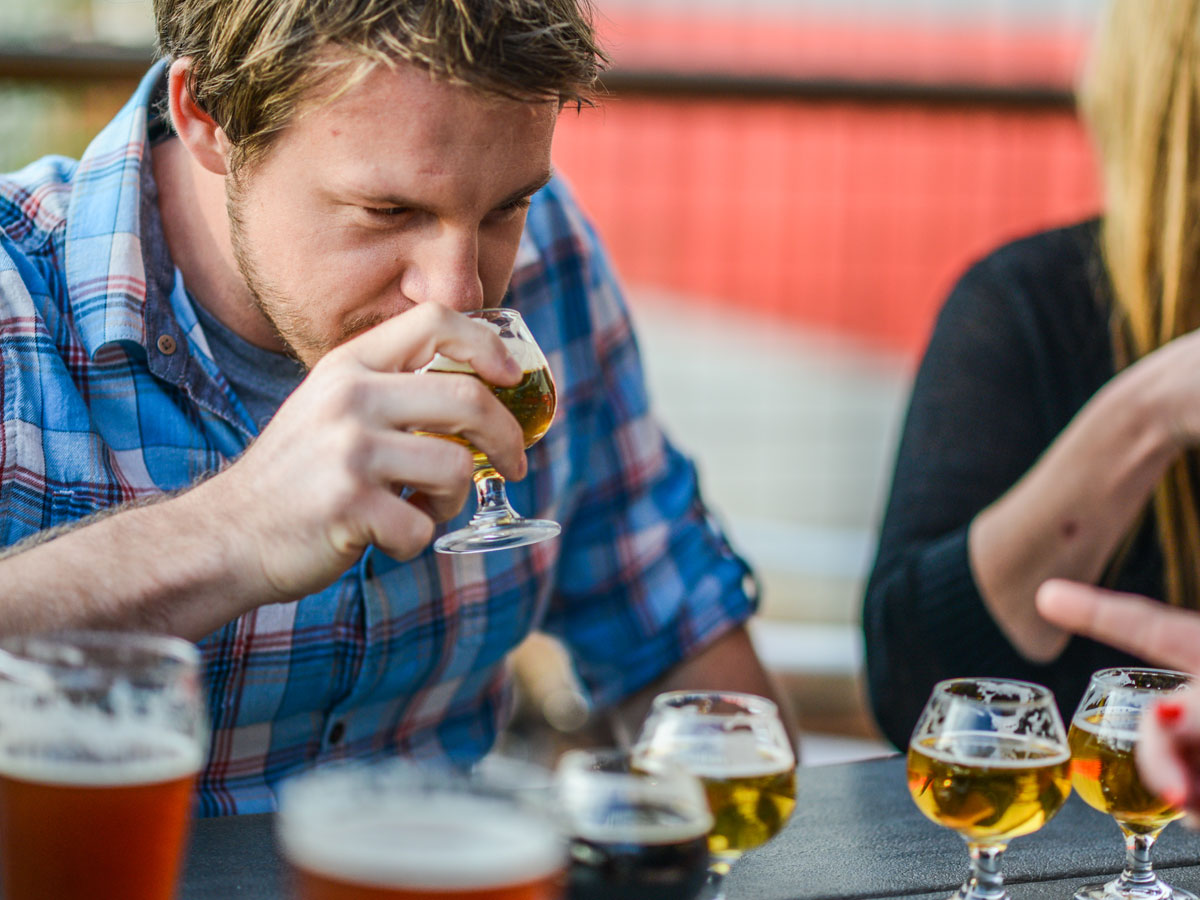 Remember when I said aroma was like many tiny bubbles? Well, some of those bubbles burst at specific levels. If you’re trying to perceive DMS, it is wise to start far away and make slow “fly-bys” away from your face and work closer to your nose. At some point, you should be able to perceive the aroma where you might not be able to perceive it closer, almost as if the bubbles had not burst yet.

Have you ever thought a beer tasted like a penny? Beers are said to be metallic for a number of reasons. If you think a beer tastes metallic, try rubbing it on your skin. If it is metallic, your skin will react with the beer and it will smell like metal too. This is because those compounds are reactive with your saliva and body oils.

Don’t forget your Spidey sense, that sixth sense that combines taste with aromas to allow you to perceive flavor. Whenever you taste a beer, try swallowing while keeping your mouth closed and exhaling through your nose. Do you experience different aromas by following this exercise? By using your retronasal sense of smell, some beers can taste vastly different.

Use Your Power for Good

Now, I did not reveal your beer Spidey sense for you to run off and use the power for evil. These powers should always be meant for good. As Antone says, half of beer’s aromas are positive, so focusing on identifying flaws can ruin the fun. Instead, use your powers to identify all of the amazing flavors and aromas in beer and encourage people to recognize their own super-sensory abilities.

We do not have to think hard and dissect every beer we taste all of the time. There are times when the experience is better when we choose to turn off our Spidey senses to enjoy the company and environment for which we’re drinking a beer. Remember taste is limiting, and beer is best when you can embrace the bigger picture of why we love it. It doesn’t hurt to look at beers critically, just remember to appreciate what makes a beer enjoyable as much as you identify what may be seen as a flaw.

Until next time, beer avengers!

Tactical Tasting: How to Harness Your Sixth Sense was last modified: February 26th, 2018 by Andy Sparhawk