When Craft Beer Goes Bad: A Guide to Refusing a Beer

Beer, even craft beer, will go “bad” under normal conditions. In fact, the quality of beer starts to change as soon as it leaves the brewery. Does bread straight out of the oven taste as good after sitting on a counter for a week? A keg of beer has an average shelf life of a few to several months if it’s kept in an optimal environment, which includes being stored cold.

Considering that up to a third of that time is spent sitting at the brewery or in a distributor’s warehouse, the window is even smaller for the consumer to enjoy it. Brewers, distributors and retailers work together to make sure that consumers receive beer that is as close to how the brewer intended as possible. Even so, poor storage practices or poor draught system maintenance can quickly degrade draught beer quality. With this in mind, how do you recognize a beer that is past its prime and when should you send back the craft beer you ordered?

Ultimately, you should be able to send back any beer that you are unsatisfied with. Your favorite watering holes and restaurants should want you to be happy, but consumers seem to have hang-ups about doing this. Everyone has heard horror stories of retribution from restaurant staff for sending back steaks that were not satisfactory to the customer. Others have adopted a mentality that all beer is good and “we should be so lucky” to have any. Still, there is an increasing number who fear being labeled a “beer snob” by their peers for rejecting a mistreated beer.

I believe these are all flimsy concerns. The likely outcome of asking for a different beer would be a server who is perfectly happy to bring you a beer that you’ll appreciate and enjoy. Additionally, the interaction offers a chance to discuss what was wrong and how to fix it. I think it would be difficult to disguise malicious retribution from wait staff in a beer, and I doubt a busy bartender has time to coordinate an attack on your meal. 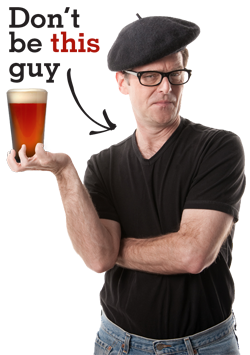 As craft beer enthusiasts, we know that not all beer is created equal. True, all beer has the power to create community, spark friendships and perhaps new ideas, but drinking old or contaminated beer is something we should not accept simply on the grounds that it’s beer, or worse, that it’s just beer.

Finally, I believe snobbery is more selfishness than anything else. If you are sending back beer just to flex your craft beer sensory prowess, then you deserve to be labeled as such. If you care about the next person who orders the beer, or the brewery that crafted it and know that what you have in your glass is not how the brewer intended it to taste, or be served, then you have a DUTY to send back the beer and voice your concerns.

This duty entails knowing when to use the power of refusal,

explains beer consultant and owner of Beer Sommelier, Matt Simpson (left). Simpson recognizes that there is a shift in regard to craft beer in restaurants and that a certain amount of leeway must be granted to those who are slow to catch on.

Simpson notes that there is a distinction between bad beer (mistreated) and beer that is not someone’s preference. “Sending a beer back, simply because you don’t like it — unless you’re relying on your server or bartender to cater to your tastes — this is a no-no. You should be asking yourself and your server a few questions about the craft beer you’re served,” said Simpson.

What to Do When Served Mistreated Beer

In theory, the answer is obvious to everyone: you send it back. For some, including myself, there seems to be a problem and stigma attached to this. For me, I think it’s the desire to avoid a confrontation. One bad beer should not ruin the other aspects of an enjoyable craft beer experience, like the company of a friend. Though, staying silent will not correct the situation for those who will come after you. We have a duty to be stewards of great craft beer. As more and more people begin to choose true craft beers, it is paramount that we give them every opportunity to discover what we have had the pleasure of experiencing.

(MORE: The Importance of Clean Glassware)

It’s not enjoyable to send a beer back, and just because the beer is oxidized does not give carte blanche to refuse it, especially if the beer came to you literally by way of the slow boat from Europe. If you have an issue with oxidized imports, your best bet is to drink as local as possible. It is important to recognize the signs through research and understand when something must be acted on.

“When it comes to sending something back, my only ‘absolute’ is if the flavor has been compromised to the point that I won’t drink it,” says Ray Daniels, Cicerone Certification Program director, “A three-month-old IPA that has lost the brightness of the hop aroma doesn’t merit a sendback, but a beer that’s obviously papery, waxy or otherwise well oxidized would. And certainly anything with evident signs of infected draught lines is going to merit a change.“

Educating yourself on beer styles and symptoms of contaminated beer go a long way in recognizing a problem, but Daniels insists that sending beer back doesn’t give you the right to be a jerk. “Just because we know better does not make us God’s gift to beer. And for goodness sake, just because you are spending money does not give you license to be ugly.”

Ultimately, the consumer is just as responsible for blowing the whistle on bad beer as anyone else who comes in contact with it along its journey to your glass. It will help ensure that the experiences future craft beer enthusiasts have are never negative. Strive to be a steward of beer, not a beer snob. And just because beer goes bad, doesn’t mean we have to drink it.

When Craft Beer Goes Bad: A Guide to Refusing a Beer was last modified: January 10th, 2018 by Andy Sparhawk