Women Shaping the Brewing of Beer

This post profiles women brewers, but be sure to check out part one of this series, “Women Shaping the Business of Beer” which profiles a few of the women working on the business side of the craft beer industry.

Women brewers are becoming more and more common in the modern craft brewing movement. Gone are the days when beer was the sole province of burly, bearded men in stained overalls and rubber boots laced to the knees. We’re seeing more and more women in the brewing industry, getting their hands dirty and emptying 50-pound bags of barley into the tanks.

The “no girls allowed” attitude of recent decades doesn’t jibe with history. The fact is, women have had their hands in brewing for centuries. During medieval times, the term “brewster” was used for a female brewer. Even the uber-feminine word “bride” is thought to derive from an ancient version of the word “brew,” as it was once deemed to be a new wife’s responsibility to maintain the supply of beer in the household.

Today there are many amazing women brewers out there helping to make sure the beer they brew tastes supreme. Here is a small sample who are paving the way for future female brewers. 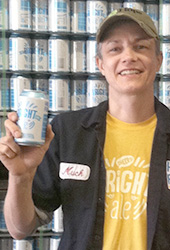 Jennifer Muckerman has only been brewmaster at Half Full Brewery for a little over two and a half years, but she is no stranger to the brewing world. In fact, she’s been in the industry for more than 15 years now.

While Muckerman is in the minority when it comes to being a female brewer, she has wonderful things to say about her male colleagues both in and out of the brewhouse. “I have had nothing but good working relationships with all of my male counterparts within the industry, including all of the male distributors, vendors, sales reps,” and others, she says.

Muckerman believes women bring a fresh take on beer, a new twist that all-male breweries might miss out on. “More and more breweries are understanding that women can bring incredible insights and specific strengths to the brewing process. I believe that women are opening up new thoughts and ideas on experimentation with brewing,” she says.

Occupying more and more of the beer world is fine and dandy, but Muckerman has her sights on a much loftier goal. “As for the future, I believe that women are taking over the world—well, the beer world at least,” she says. “The rest of the world will have to wait.” 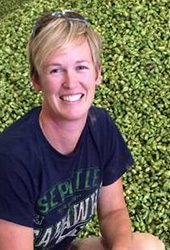 The Seattle area (actually, the entire state of Washington) has seen a great influx of craft beer, and Stoup Brewing is one of those breweries on the list of “must-see” places, due in part to brewer Robyn Schumacher. Schumacher, formerly a high school biology teacher, was the first female Certified Cicerone in the state of Washington.

She started home-brewing about six years ago. After coming to the realization that she wanted to transform her hobby into a career, Schumacher left her teaching job in 2011 and leapt head first into the beer world. “I met brewers, crashed the Master Brewer’s conference, and just immersed myself in the community as much as possible,” she says.

While she interned at a couple of breweries along the way, Schumacher’s dream was always to open her own brewery. With the help of a couple of friends who shared the same ambition, they founded Stoup Brewing in the fall of 2013.

Schumacher says the archaic notion of big-beer companies only marketing towards men is now out the door. “The industry is taking notice of women as craft beer drinkers, where in the past beer was considered a man’s drink, thanks to advertising that made it seem that way,” she explains.

“My experience as a woman in the industry has been nothing but wonderful,” Schumacher says. “I’ve been treated with the same respect as everyone else.” 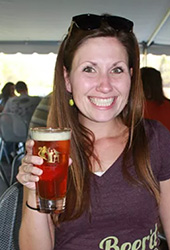 Colleen Krieger really doesn’t know the meaning of the word “no” when it comes to breweries. Ask her for help in any area and she won’t turn you down, whether it’s something involving face-to-face customer interaction or a task that will keep her back in the brewhouse for hours on end. Her experience in the industry reads more like a long grocery list than a resume.

Krieger doesn’t have a pause button. She’s done everything from running special events at festivals, to opening and closing the tap room, to training staff, to cleaning and sanitizing fermenters, to labeling and bottling, to conducting brewery tours, to making sure the proper carbonation is used for the taproom beer lines.

During more than 10 years in the industry, Krieger has bounced from one brewery to the next, starting with Brewery Ommegang in New York. That was followed by a smaller brewery in Connecticut before she shifted to Relic Brewing Co. in Plainville, Conn. She has made the most of her decade of experience, learning more and more at each pit stop.

The Certified Cicerone and her husband had an epiphany almost eight years ago that would change their lives. “When my husband and I moved to Connecticut from Florida in 2007, we immediately noticed the lack of local craft beer,” Krieger recalls. “From that moment on, we decided that we were either going to help the Connecticut craft beer scene expand or we would eventually have to leave.”

Luckily for Connecticut, the two chose to stay and dig deep into the brewing industry. “We attended as many festivals as possible, established names for ourselves in social media, became part-owners in breweries around the state, and eventually I even began helping breweries open,” Krieger says.

Krieger understands the renaissance that craft beer is going through and wants to make sure that both genders are represented in the years to come. “As a mother of three young children, two of whom are girls, I find great strength in knowing I am part of a group of women helping to pave the way and knock down even the smallest barriers for my children,” she says.

Krieger describes her passion for the industry in terms that each of us should carry into our own careers: “If you have love for the field, you better become a part of it.” 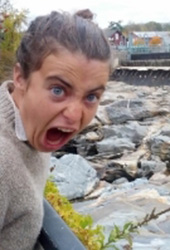 Although she’s relatively young, Haley Campbell is no stranger to the brewing world. She’s been the Director of Quality Control at Rising Tide Brewing Co. since around Valentine’s Day 2014, so you could say she picked a great time to pour her heart into her new position. Before Campbell joined Rising Tide, she spent a year and a half at a different brewery, working on the packaging line and in the laboratory.

Seeing as she’s only in her mid-20s, Campbell can’t speak to sweeping, decades-long trends in the brewing industry. But she says her own experience “has been very positive. Overall, my co-workers have both valued my opinion and freely shared their experiences and knowledge with me.”

Campbell is very optimistic about women’s roles in the future of brewing. “I would love to see more women in the beer industry as it continues to grow,” she says. “We love beer. We drink a lot of it. Why shouldn’t we make it?”

Comment and mention other women brewers out there to help spread the word of their great craft while also supporting local breweries across the land.