Craft brewing pioneers, Will and Mari Kemper started Chuckanut Brewery & Kitchen in Bellingham, Wa., in 2008. It was their latest beer adventure after a lifetime of brewing missions that spanned the globe. Now at home in Bellingham, Mari and Will are cornerstones of their brewery and of the Bellingham beer community.

Last year, I was honored to be a guest of Whatcom County during the third Bellingham Beer Week—which runs through September 20. Despite a jam-packed few days of amazing beer and events that only an elite beer destination could provide, my fondest memories of the trip had no craft beer involved whatsoever.

On a dreary Pacific Northwest morning, I met Mari Kemper in a parking area adjacent to Larabee State Park. We scaled a slick embankment and followed the train tracks through a dense, old-growth forest to the shores of Chuckanut Bay. Led by Mari, the group worked to keep in earshot of Mari describing the history of the area. 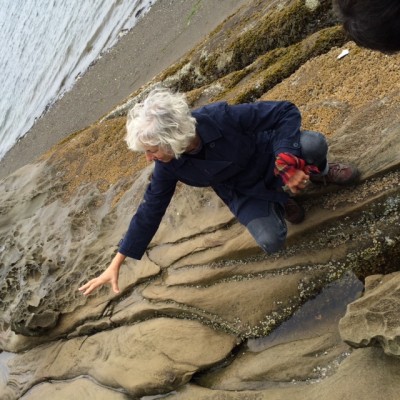 Once at the shore, we followed Mari as she excitedly descended upon new tidal pools from the evening’s high tide. We watched and listened as Mari pointed out tiny shellfish affixed to the rocks and colorful sea anemones that, when gently poked, would quickly squeeze shut.

As we combed the beach, Mari continued to narrate the adventure and explained how she and Will had decided upon Bellingham as the town that they’d build their award-winning brewery and make their home.

Later we would meet up with Mari and Will for one of the best beer-paired meals I had ever had. I was wowed by the Chuckanut Brewery team who worked in the cleanest, most technologically-advanced brewery I’ve ever laid my eyes on. Not much could top the San Juan Island Coho salmon with smoked Gouda risotto, but what I’ll always remember was Mari hopping from rock to rock in search of starfish.

Bellingham Beer Week ends this weekend, but make a plan to visit next year’s festival (or anytime, really)—you may never want to leave.