As thousands of retailers and small and independent craft brewers in all 50 states come together to celebrate I want to point out that craft brewers year-round “beer it forward” in one way or another through their various acts. Chances are your community has been exponentially advanced by craft brewers. Whether it be supporting our veterans to homelessness to a cleaner environment, they consistently work to exemplify this ideal every day in creating a lasting impact. Would you agree that supporting the small guy and gal breweries matters? 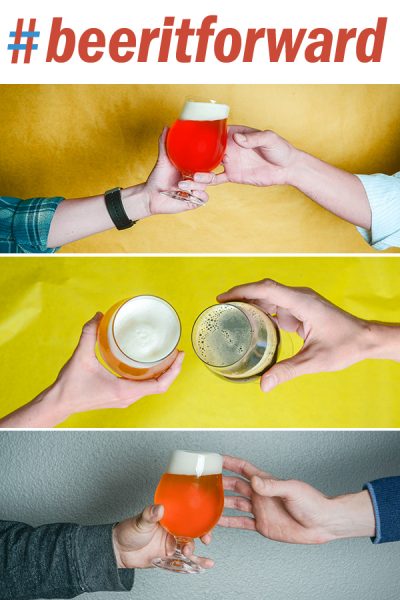 Craft Brewers are locally and regionally using their craft beers as a cause for other causes. Tours, philanthropy, product donations, volunteerism and sponsorship of events are having community changing ripple effects. Beer is not just a marketing-driven beverage. It’s about our connection to the beers and to the brewers. To me, every time I visit a brewery or see a new beer on the restaurant menu or the liquor store shelf it brings to mind the phrase what feels good tastes even better.

Over time, craft brewer New Belgium Brewing has donated more than $8 million; in 2016 alone they donated more than 4000 hours of volunteer time with a goal to improve the health of the planet to “inspire others to joyously embrace sustainable choices” (a great line from their website).

Hill Farmstead Brewery in Vermont accepts donations to local charities instead of tips in their tap room.

Sam Adams Brewing’s project the American Dream has coached more than 7,000 small business owners; it’s disbursed more than 1,300 loans totaling $16 million and roughly 60 percent of these loans were made to immigrant-owned businesses.

In Honolulu, Hawaii, the scars of World War II are hard to see, but Glen Tomlinson is working hard to preserve it for generations to come. He founded Home of the Brave, a museum — and eventually a brewery — to attract the next generation in his doors to share stories of the war and see WWII memorabilia he’s collected from vets who have come there to retrace their steps.

What Lens Do You Use To View Beer?

Beyond the stories above I always have to remind myself that everyone has a different lens even when we’re focusing on the same thing. Do you view beer through the lens of being a beer lover? Then you’re not alone as more adults enjoy beer over wine and spirits. Or perhaps you love wine or spirits over beer? Perhaps you don’t event partake in fermented beverages.

My lens on beer and supporting our independent breweries stems from growing up when I was routinely taken by my parents, along with my brother, to restaurants to supply his beer can collection. My dad and mom were always doing adventurous foodie things like stopping at the roadside spring to fill up whatever empty milk jugs and mason jars were around the house. Or we’d stop at the fruit or veggie stands off the highway and visit the weekend farmers markets so we can talk directly with the growers. As I came of age I started homebrewing, touring, tasting and talking beer.

My beer journey taught me that small brewery businesses are grassroots and innovative, authentic and accessible. To me, craft brewers are the very embodiment of the American Dream. They are entrepreneur risk takers who put everything on the line to open their doors and also work hard to give back. Sounds similar to many other small business owners right?

(MORE: 9 Strange Brewery Names and the Stories Behind Them)

The beverage of beer has gone through an incredible metamorphosis. In 1978 there were less than 100 U.S. brewing locations. The beer scene of my parents’ generation was mostly imported beer and Light American Lager. It seemed like the same beer was just being sold in different bottles and cans. For the most part, beer loyalty was marketing driven based on the number of impressions from advertising. In 2005 a very talked about AdAge article dubbed beer “dead.” It stated: “There’s nothing intriguing about beer. It’s like water and soft drinks.”

That’s not the beverage we know and love today with tens of thousands of beer brands in the U.S. along with 5,300 small and independent breweries and the U.S. now being the number one destination for beer on planet earth. U.S. craft brewers have localized beer. Today more than ¾ of adults of legal drinking age live within 10 miles of a brewery. Craft brewers employ 129,000 full- and part-time jobs. In an era of job profit loss to overseas along with outsourcing of jobs and a race to providing the cheapest price for what we buy, in many industries here is an example of the exact opposite.

The Smithsonian National Museum of American History even just hired a brewing historian to document beer and craft brewers 1960 through today. Especially in the past 30 years craft brewers have innovated and taken the beverage to a place the world has never seen. They took old world beer styles and gave them new world twists like advancing the style of India Pale Ale. For any beer geek readers (you know who you are) let’s clink a glass to Sierra Nevada’s Hop Torpedo, the Dogfish Randal and Oskar Blues Crowler. Innovation examples abound including today’s range of flavor packed hop-centric, cloudy and murky New England Style IPAs. These may or may not be your thing, but to many, including me, they are glory in a glass.

Who you choose to pour into your glass matters. Prioritizing support of the innovative small will help ensure the U.S. beer scene continues to innovate and thrive all the while giving back to our communities, culture, beer loving palates and country. I’m stating the obvious to some and the new to others, but beer is about more than what is in the bottle, can, keg or growler. To many, it’s about the people who brewed it and who owns the brewery too.

Time to Beer It Forward

So this week beer lovers are encouraged to #beeritforward, the simple act of sharing a craft beer. Every time you do, you recognize that craft beer is grassroots, it’s people-powered, it’s hard-working small business owners that have a passion for what they do and continually push the limit in beer. So let’s grab a beer. Person to person, one friend to another, neighbor to neighbor, or even stranger to stranger.

While our craft brewers continue to ladle on the craft beer charm along with unprecedented community connections the only question that remains is — who will you share a beer with?

To find out more check out the official American Craft Beer Week calendar. You can also find a brewery to celebrate near you with CraftBeer.com’s Brewery Finder.

Why You Should Beer It Forward in Honor of American Craft Beer Week was last modified: May 17th, 2017 by Julia Herz