An expertly handcrafted beer from a small and independent craft brewer is a beautiful thing, but pair that beer with the right food and the results can change both the food and the beer in ways you’d never expect.

We asked brewers and brewery founders across the country to share their favorite craft beer and food pairings. The results will inspire you to think outside the box the next time you choose a perfect bite for your favorite beer. 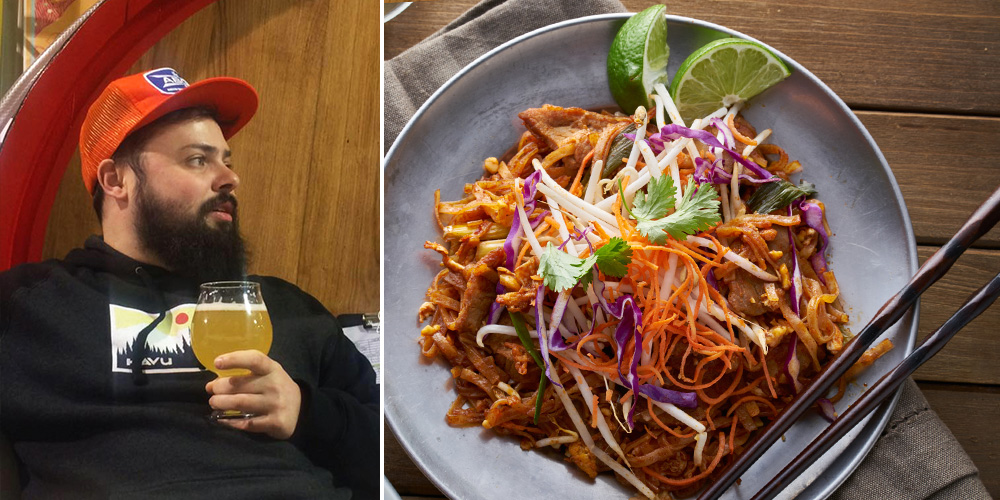 “We brew a lot of Belgian beers and that style lends itself so well to food,” says Danny McMahon of Door County Brewing Co. in Bailey’s Harbor, Wisconsin. He got his start homebrewing in college and eventually went to brewing school. When his family had the opportunity to open a brewery in Bailey’s Harbor, he was a clear fit for head brewer.

McMahon shares that living in a rural area, they don’t have access to a wide variety of Asian-inspired ingredients. But there is one Asian dish his family makes often, and it is his favorite to pair with their Pastoral Farmhouse Ale. “Pad Thai is one thing we can find all the ingredients for so we make a lot of Pad Thai at home,” he says. “Belgian saisons have super dry spice complex without bombarding you with 50 different flavors,” he says. This allows for the aromatics and spiciness of Southeast Asian foods, specifically their Pad Thai, to pair well with the juicy character of the yeast and the aromatics of the saison. 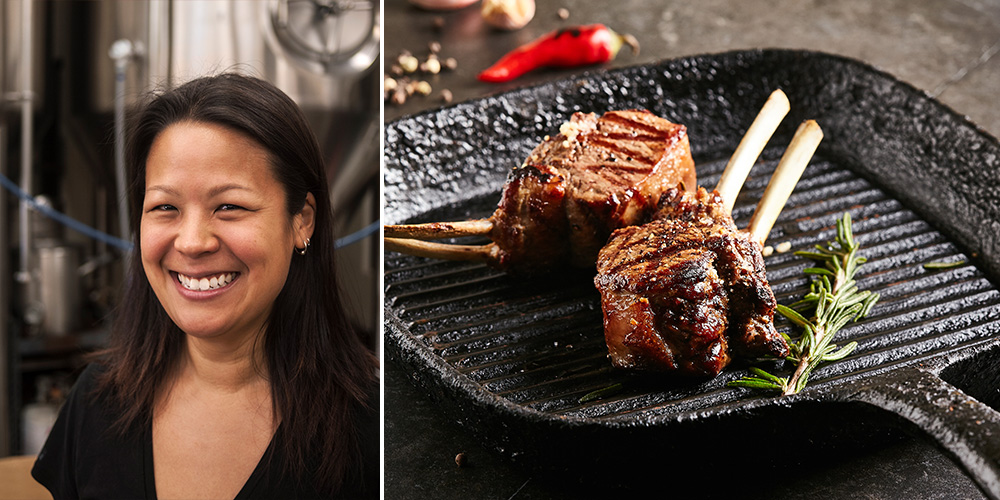 “I grew up in a restaurant family so I am essentially the palate for the team,” says Eagle Rock Brewery co-founder, Ting Su. That team includes Su along with her husband and her father-in- law who were avid homebrewers before the three opened the brewery in Los Angeles. Su is also the founder of the Women’s Beer Forum, an educational forum that meets once per month and has hosted as many as 70 participants per meeting. “We incorporate pairings quite a bit,” she says, adding that a recent forum topic was pairing beer with baking.

Su’s favorite pairing is their Yearling, an American wild ale, with gamey meat, specifically lamb. “The funkiness matches really nicely with the gaminess,” she says as she explains why the beer works so well with the meat. It’s a balance of the richness that comes from the meat with the acidity of the wild ale. 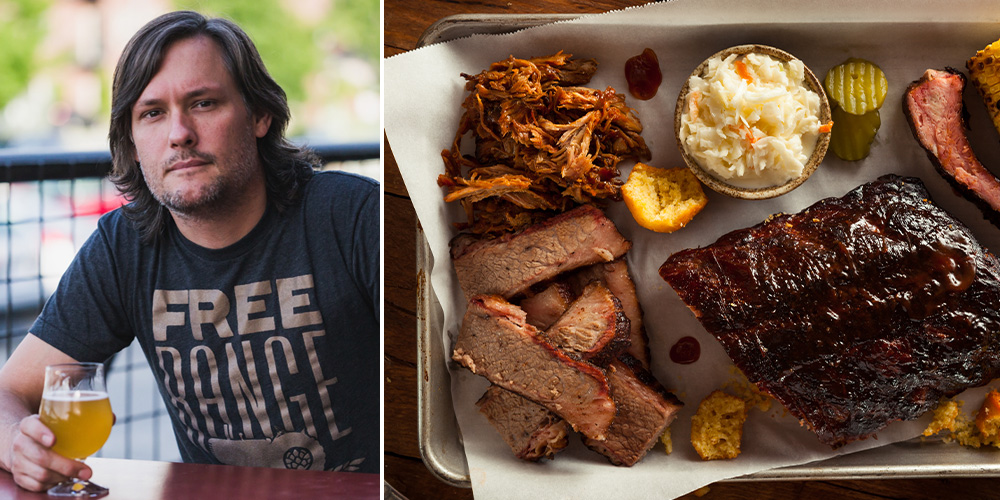 When asked about his favorite food to pair with beer, brewer, Jason Alexander, immediately says, “Eastern Carolina barbecue.” “Whole hog, wood-smoked and vinegar-based sauce. Those are non-negotiable,” he states when asked to define that type of barbecue.

At Charlotte’s Free Range Brewing, their beers change all the time, but they do keep one staple beer on the menu and it is his favorite to pair with the barbecue. Cream of the Crop, a cream ale brewed with North Carolina malted grains, has a crisp sweetness that is balanced by the acidity of the pig. Alexander also adds, “Cornbread or hush puppies are served with it and they augment the flavor of the beer.”

But for him, this pairing is as much about the company as the flavors. Eastern Carolina barbecue is almost always a gathering food. “It’s not just eating, but eating with people you care about being around,” says Alexander. It makes both the food and the beer comforting and delicious. 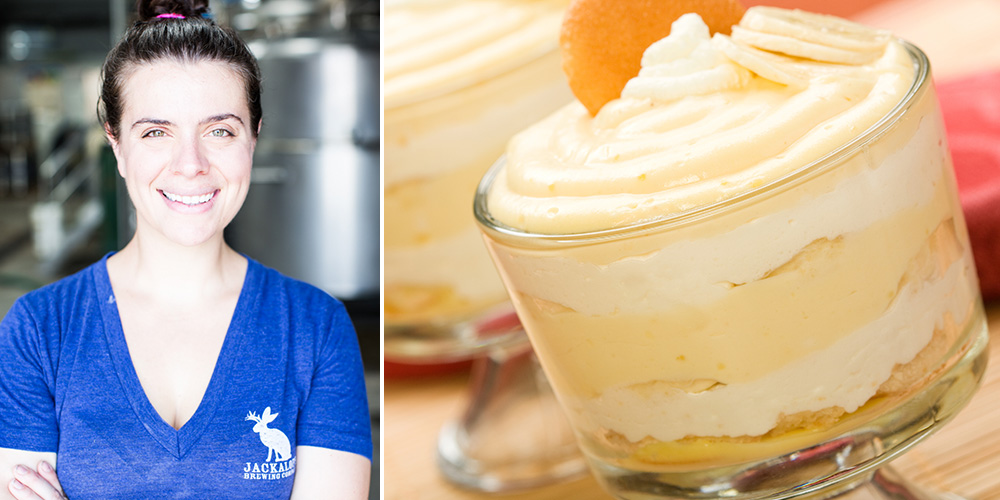 Jackalope Brewing Company in Nashville was established because of brewmaster Bailey Spaulding’s love for beer. She describes it as, “A passion for creating something, and the perfect blend of art and science.” The brewmaster also adds, “Being an active part of your community is a fun way to spend your time.”

According to Spaulding, one of their beers that has somewhat of a local cult following is Rampo, a red rye ale. She describes it as being like an Irish red, but with some spice that comes from the rye. Her pick for a pairing? Banana pudding. Specifically, banana pudding from the popular hot chicken spot, Haddie B’s. “It has a nice malty backbone. Rye gives it some spice and it dries out in the finish,” Spaulding says of the beer. It’s these qualities that balance out the sweet creaminess of the dessert. 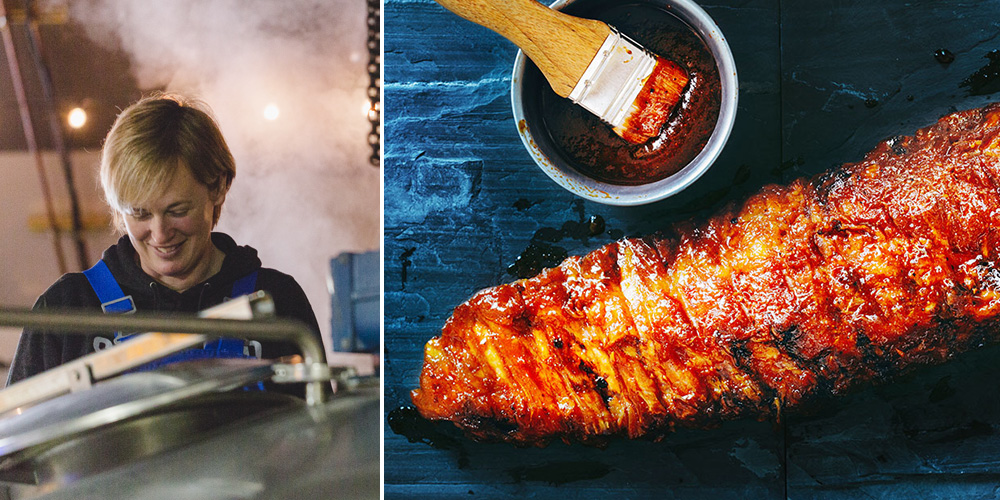 Robyn Schumacher’s brewing inspiration comes from the camaraderie of the brewing community and the joy of harvesting the power of living organisms to create a beverage that brings happiness. “Before I’d even tried craft beer, I loved the communal aspect of drinking beer with friends at parties, around campfires and in loud bars,” says the brewer and Certified Cicerone.

(WATCH: Stoup Brewing on the Art & Science of Craft Beer)

Regarding her favorite food and beer pairing, “There are so many delicious options! Don’t make me choose!” she jokes. She shares that there is a strong Vietnamese community in Seattle and that her wife is Vietnamese making the cuisine one of her go-to favorites. Vietnamese short ribs with Stoup Brewing Robust Porter is her favorite combination. Schumacher explains, “The short ribs are slightly sweet so the maltiness of the porter complements the dark, caramelized sugars. We use several types of roasted malts in our porter, so the grilled beef and the roasted malts are a natural complement. The roasted malts also cut the richness of the beef fat very well.” 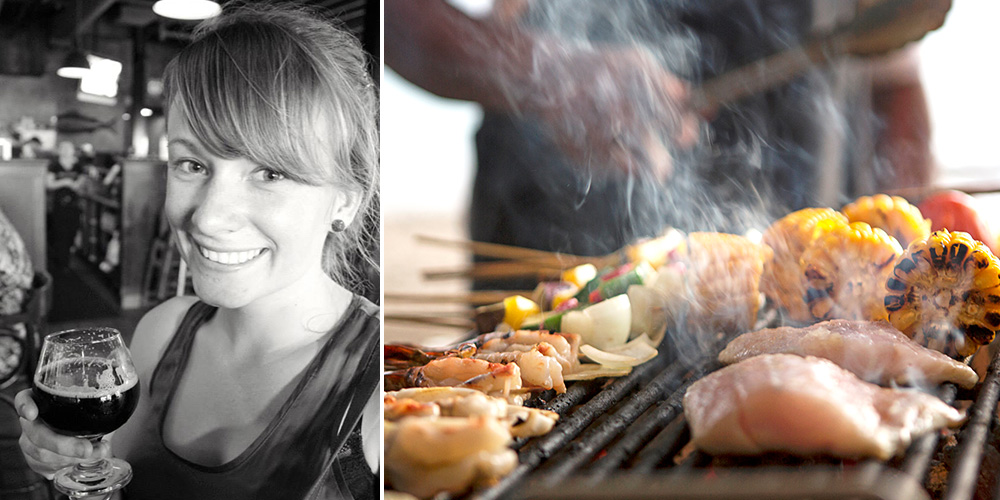 A 12-month tour of the U.S. beer scene by Las Vegas’ CraftHaus Brewery’s Steph Cope laid the foundation for the beers they offer. “We identified key elements of our favorite breweries that we eventually emulated at CraftHaus Brewery. For example, we specialize in fewer (albeit still broad) styles, namely Belgian-styles and IPA’s – the two styles I enjoy drinking and brewing the most,” says the founding brewer.

It’s one of these Belgian styles that she enjoys pairing with food, the CraftHaus Evocation Saison. She likes it best with grilled or poached fish and seafood. “Our saison has subtle notes of lemon, pepper and rye-spiciness. It is also dry and effervescent so it lends itself well to be paired with seafood dishes, helping balance any saltiness or oiliness of the dish.” She sometimes takes things a step further and, in addition to pairing the beer with fish, she cooks with it, too. “I also enjoy using saison to poach the fish, then use the leftover broth to create a sauce. This brings out the nuanced flavors of the saison,” she shares. 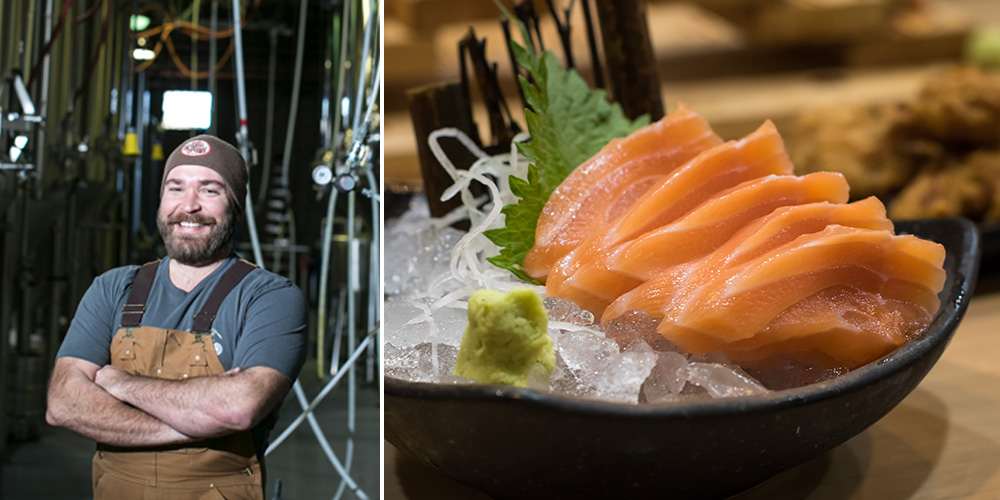 A career that began in biotech eventually led Harvey Kenney back to his love for beer and brewing. It’s a journey that has taken him from California to Turkey, and currently to Shreveport, Louisiana, where he is the chief brewer at Great Raft Brewing. “Our inspiration is often from within and based on what we want to be drinking. A hoppy lager or funky saison. We brew what we like to drink,” Kenney says.

(READ: IBUs: Fact, Fiction and Their Impact on Your Beer)

His pick for a favorite beer and food pairing is a pale lager with raw fish. “The clean refreshing aspects of a good lager pairs beautifully with the delicate flavors of a good raw fish dish like Poke or sashimi. Both are perfect for showcasing quality, but not intensity of flavor,” he explains. He also adds the same beer is a nice match for onion or vinegar-based salad dressings and the shoestring fried onions you can often find atop hamburgers. 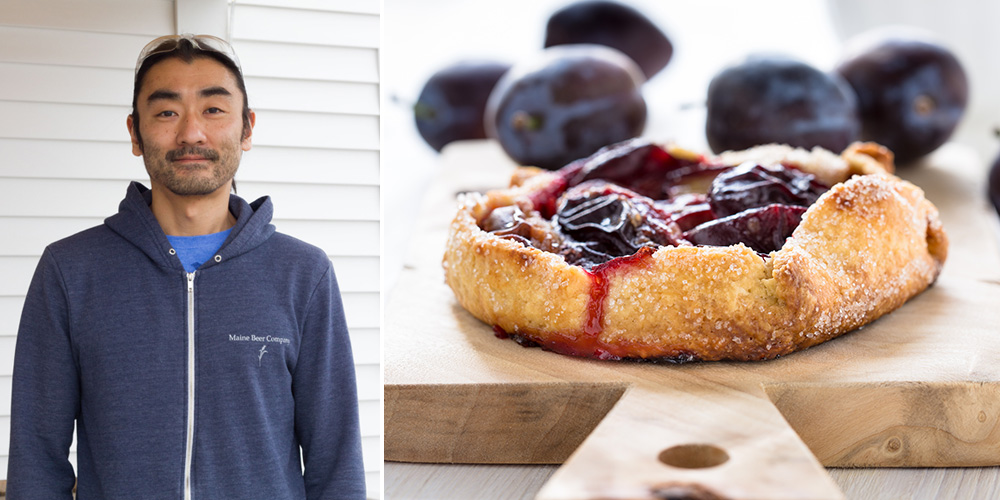 For many, craft beer is their second career, but few spent career number one as an aerospace engineer, or what we commonly refer to as a “rocket scientist.” But this is the path for Cole Corbin whose past as an avid homebrewer led to a career switch making him Director of Brewing Operations at Maine Beer Company in Freeport. “What draws me to making beer is that it’s the perfect balance between science and art; using my creativity to come up with recipes with unique hop flavor combinations, while also using my scientific and engineering background to consider the variables during recipe design.”

Corbin’s perfect pairing is Maine Beer Company’s Lunch IPA with Chef Emil’s Passion Fruit Tart at Sur Lie, a restaurant in Portland, Maine. “This pairing was so special and memorable for me because I’ve never had a dessert paired with an IPA before,” says Corbin. When explaining how the beer and dessert worked together, he says, “The tropical fruit flavor and aroma in our Lunch IPA melded seamlessly with the bright passion fruit flavors of the tart; each enhanced the intensity of the other and elevated both to a whole new level.” 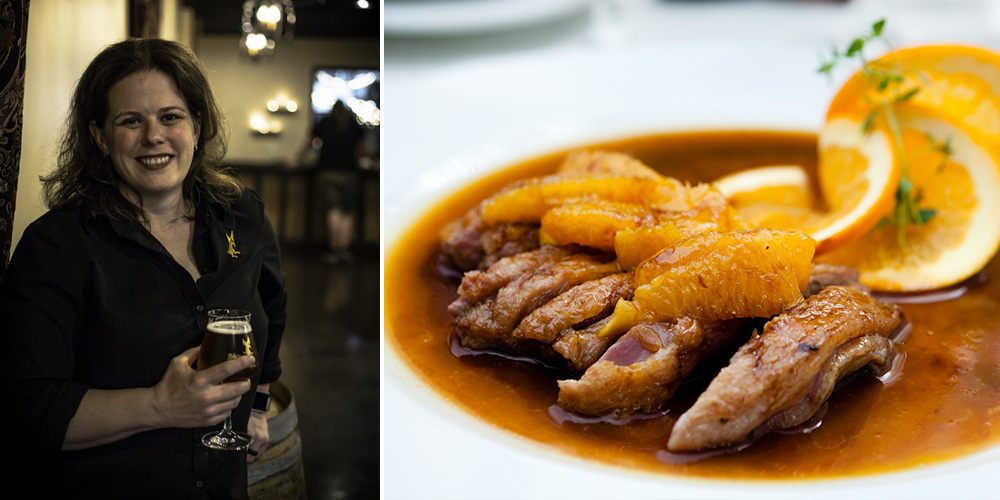 “I was introduced to Belgian beers and fell in love,” says Kathy Davis, “Head Goat” and brewer at Abbey of the Holy Goats, as she shares about her journey in craft beer. Before opening the brewery, she went back to school to better understand the business side of brewing, and spent time perfecting her beers, centering them around food pairings.

Her favorite food pairing goes with their Belgian-style India dark ale, a beer she describes as being like a Belgian dark strong, but hopped up. “I pair it with dimmed duck that has a maple syrup, orange glaze. The richness of the duck is balanced perfectly against the bitterness of the hops, but the malty background of the beer brings out the smoky notes of the duck,” Davis says. 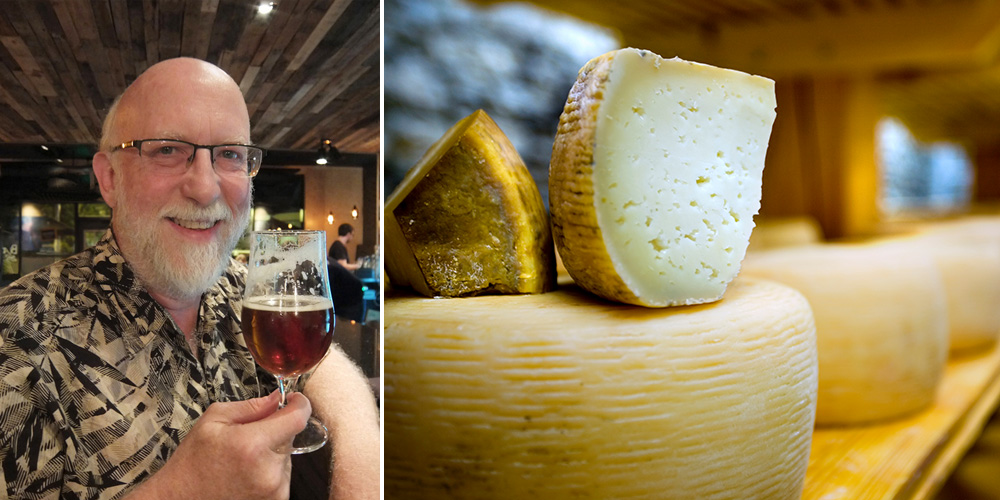 An active member of the brewing team at 5 Rabbit Cervecería in Bedford Park, Illinois, Randy Mosher shares that the brewery considers its job to represent the culture of Latin America by brewing beers that tell stories. “We formulated our first three beers around certain types of food,” says Mosher. As an example he explains that 5 Lizard, a passion fruit witbier, is a creamy, acidic, fruity beer tinged with fresh lime peel making it perfect for ceviche and other light seafood and vegetable dishes.

When it comes to his favorite beer and food pairing, though, Mosher turns to cheese. When asked which beer and cheese is a favorite combination, he says, “With the Yodo Café con Leche Imperial Porter, I’ve enjoyed an Italian Piave.” He explains that it’s a hard cheese comparable to Parmigiana, but slightly rounder and sweeter. “This brings a meatiness and a hint of salted caramel to the pair, relating to the coffee roastiness and the dulce de leche. Dairy and chocolatey notes are another layer. Because it’s a fairly strong beer, there’s enough alcohol and carbonation to scrub the fat off the palate,” says Mosher.

Lori Rice is a photographer, writer and nutritional scientist based in California's Central Valley. Over a decade ago in a biergarten in Vienna, she found a passion for travel, food culture and well-crafted beer which led to the publication of her cookbook "Food on Tap: Cooking with Craft Beer" (Countryman Press, 2017). When she’s not writing about food and drink and photographing the process, Lori can be found traveling with her husband to investigate all things food and beer in the U.S. and abroad.