Picture this: you’ve just time-traveled back 25 years and are sitting in a brewpub, sipping a freshly-poured “microbrew.” The beer sitting in front of you is hazy, so you feel somewhat at ease, but it’s mysteriously served in a tall, curvy vase with a bright yellow lemon wedge straddling the top.

One whiff of the thick two fingers of foam and you think to yourself, “Why does this IPA smell like bananas, cloves, and lemons?”

You then quickly snap to reality.

Brewpubs of the 90s, with their blonde, red, hefeweizen, pale ale and porter tap lists have vastly vanished across America, along with their standard menu of burgers, steak fries and chicken strips. Today, a new breed of brewpubs have taken root, places that have the same heart and soul as the brewpubs of yesteryear, but are more hubs of diversity, not only in the food and beer styles being served but the people that work and dine there.

In Orange County, California, for example, several breweries have opened with kitchens or dedicated, self-run food trucks that serve a menu of epic chef-driven fusion bites that are just as tantalizing as the craft beers being brewed. 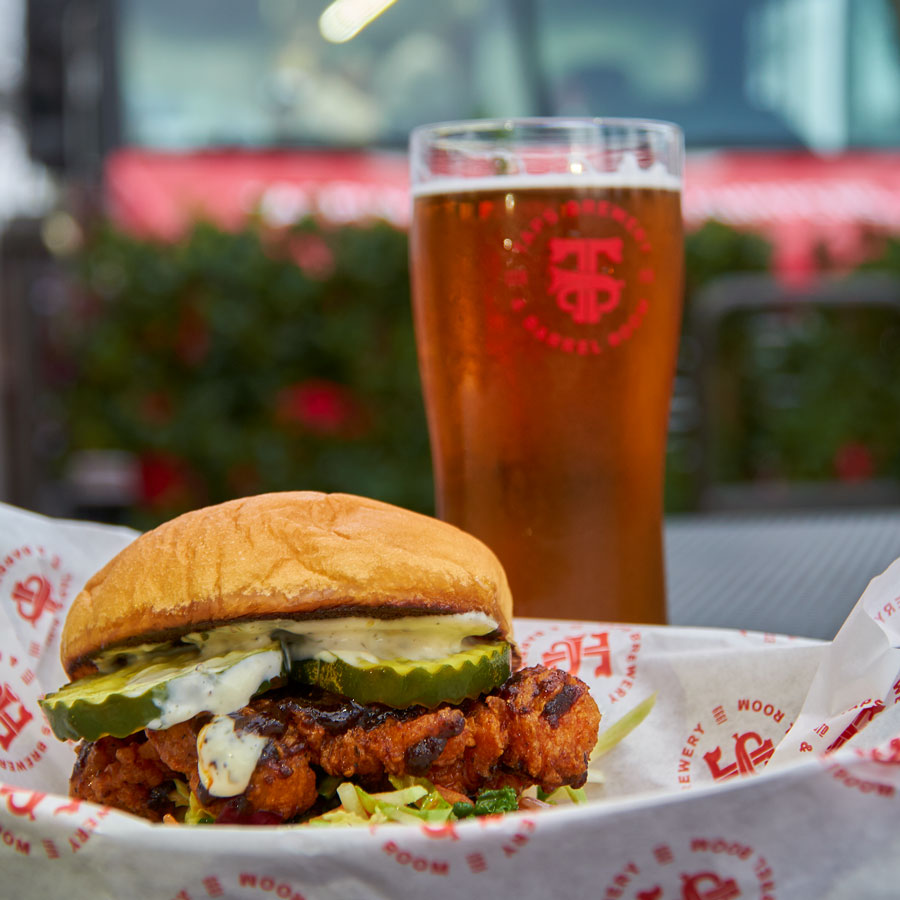 TAPS is no stranger to the classic brewpub, opening its first location in 1999 and winning Mid-Size Brewpub of the Year at the 2015 Great American Beer Festival. Co-Owner Joe Manzella saw the trend of smaller breweries and evolved his business into a large format brewery with a cozy tasting room and a dedicated TAPS food truck.

“At the original brewpub location, guests still drink beers, but dining is the focus,” Manzella says. “At the new location it’s the opposite.”

The food truck menu has everything from a Hot’Lanta chicken sandwich with house-made pickles, to beef fat fries and even a banh mi-style hot dog topped with jalapeño, cilantro and ginger-lemongrass aioli. TAPS has recently announced two locations with smaller, beer-first kitchen concepts opening in 2020.

When Owner Scott Cebula was looking for a craft brewery location, both the landlord and city pushed him to open with food.

“I see breweries with kitchens as the 2.0 model,” Cebula says. “I’d rather be the first guy with brewery 2.0 than the last guy opening without a kitchen.”

Along with his game-centric tasting room, the menu is inspired by his travels and his wife Kanda’s Thai background.

“When designing the menu, we were implicit on not requiring cutlery,” notes Scott, who offers a traditional Japanese karaage chicken served with different spice levels (like hyperspice!), barbecue carnitas sliders, and even fresh hot pretzel bits with gruyère-butter dipping sauce. 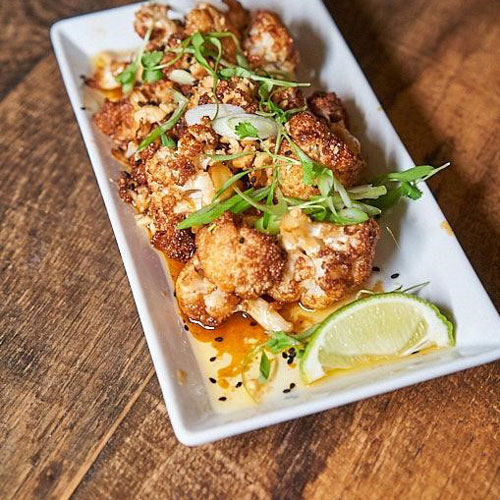 Early on, Owner and Brewer Evan Price once said, “I would absolutely love to open a British-style pub complete with shepherd’s pies.”

When the opportunity came to take over a turnkey spot in Costa Mesa, bank loans were opened, nerves were rattled and Green Cheek’s second location turned into a reality. Although there aren’t any shepherd’s pies on the menu, their smash burger went through more research and development than they do for the hop selection on their award-winning IPAs.

“We did patty blends side-by-side to figure out what beef cuts we were going to grind in-house,” Price says.

One of the hottest new menu items is their pad Thai cauliflower, which also happens to be vegan. It’s served without noodles, but still has that same peanutty-pad Thai essence with plenty of cilantro, scallions and lime squeezed on top.

Pepperoni rolls are the last thing one would expect to see near the beach in California. After all, the sweet doughy roll bites stuffed with pizza-like fillings originated in West Virginia.

“It’s cool when someone from that area comes in and sees we have mountaineer rolls,” Docent Brewing Co-Owner Brian Hendon says.

(Find Breweries: Near Me)

Fusion kicks into high gear with a Korean-style Reuben sandwich oozing with character from house-fermented kimchi. Pair it with The Rube, Docent’s 7.5% ABV red ale that drinks like a midday Manhattan. 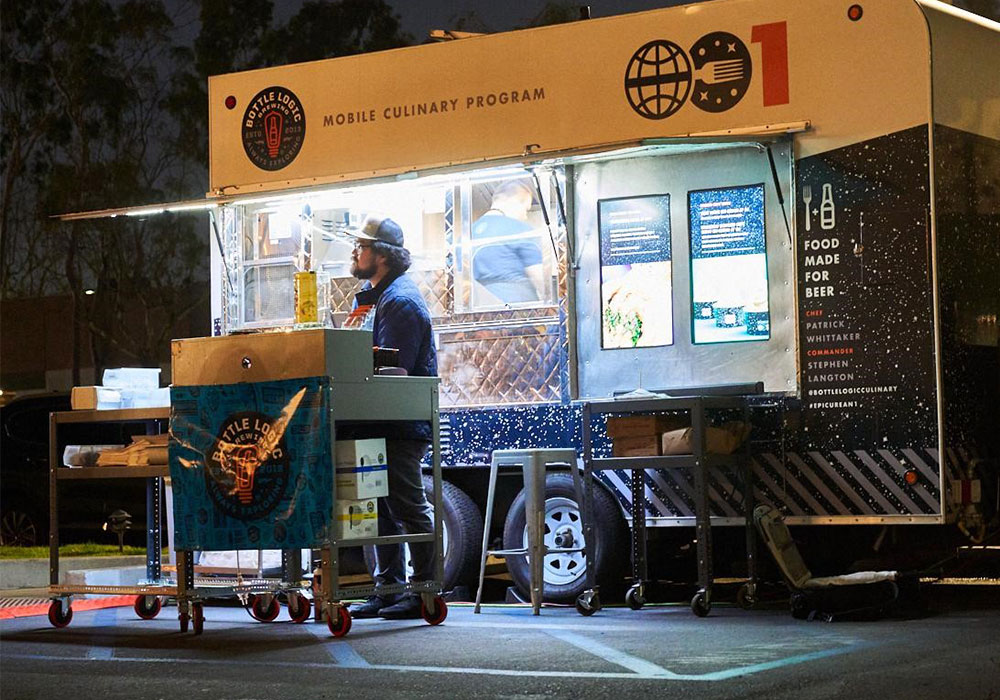 Bottle Logic’s Epicurean 1 mobile culinary program is a rolling kitchen, a temporary alternative until their full kitchen is built.

“We’re using it as a means of developing our brand identity and running a live test – adjusting research and development with our guests,” says in-house Chef Patrick Whittaker.

But Whittaker hasn’t always been behind the spatula; he started in the tasting room pouring beer. It didn’t take long for the team to put his culinary degree to work on beer dinners. Expect seasonal bites, like a steaming Toshikoshi bowl with tempura shrimp, soba noodles and Japanese sweet potato. Paired with Hanamachi, Bottle Logic’s Japanese rice lager, it’s easily an industrial-area brewery experience worth having.

Do you have an exciting brewery in your neck of the woods that has bites? Let us know!

Gregory Nagel is the author of the OCBeerBlog.com and writes about craft beer for Orange Coast Magazine. He lives in Anaheim, California with his wife and kid.