Although hops are the current stars of American craft beer, many aficionados have their own favorite “fifth ingredient.” For some, it’s the char of an oak barrel; for others, it’s the intense roast flavor of coffee or the spicy bite of rye. But ask anyone who puts Brettanomyces or other souring agents in that coveted fifth spot, and they’re likely to say that their favorite beer styles includes the cherry-infused Belgian-style, otherwise known as kriek.

“Kriek” is simply the Flemish word for cherry, and these spontaneously fermented beers are brewed with the fruit — pits and all. Kriek sits alongside raspberry-infused framboise, peachy pêche and blackcurrant cassis as sub-styles of Belgian lambic, an appellation that hails from Belgium’s Senne Valley and adjoining Pajottenland and dates back at least 500 years.

But the particular majesty of sour cherry beer is no longer a throwback to centuries past, nor is it limited to the Low Countries. North America’s cherry harvest is typically in July and August, and while some regions were ill-affected by last summer’s weather, sour cherry beers from U.S. craft brewers are still hitting taps and shelves.

As P-Funk maestro George Clinton once said: “Just by getting a little taste of funk, you’re going to be hooked.” 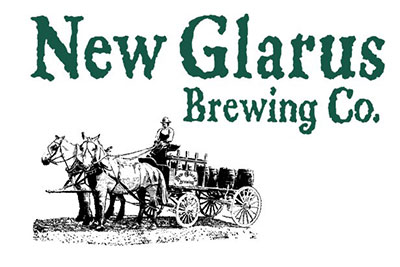 Depending on whether you live in Wisconsin, this famous cherry beer is either the easiest to come across…or the hardest. It’s the only sour cherry ale that’s available year-round, but New Glarus notoriously doesn’t distribute out-of-state.

The 4-percent ABV, fire-engine-red elixir boasts more than one pound of Door County Montmorency cherries per 750-ml bottle. It has won seven Great American Beer Festival medals beginning in 1996, although New Glarus president Deb Carey says that her husband, brewmaster Dan Carey, “was brewing this beer in the mid-’80s.”

The beer earned its keep over the years as New Glarus expanded, and is now spontaneously fermented in the brewery’s Wild Fruit Cave. As for the name, Wisconsin Belgian Red? It’s the Careys’ way of paying homage to the style’s geographic origins without infringing on the appellation.

“Just like we would not want a brewer in New York to label their beers as coming from Wisconsin, we do not use words [specific to Belgium] like ‘kriek’ or ‘lambic’,” says Deb. 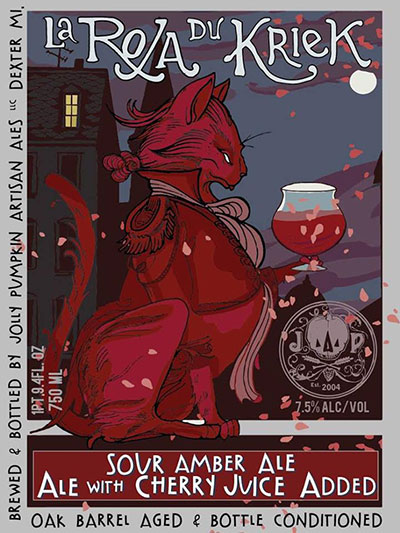 Roja is a Belgian-style Flanders with an acetic pucker that sour beer fans have craved and enjoyed since 2004. Less known outside of Michigan is that Jolly Pumpkin founder and brewmaster Ron Jeffries has, by his account, “been brewing a krieked version of La Roja for probably about ten years now.” The cherry-infused variant has so far flown under the radar as a draft-only offering, or served from firkins at festivals. 2015 marks the first year La Roja du Kriek was been available in 750-ml bottles.

Every 100-barrel batch of this beer features over 50 gallons of freshly juiced, Michigan-grown Montmorency cherries, which Jeffries describes as “tart with an underlying hint of mineral sweetness.”  Additional juice is also pumped into an oak foudre cast while the 7.5-percent ABV beer ages.

“How could one not be inspired by Cantillon?” ponders Jeffries, referring to the inspiration he draws from Brussels’ most famous lambic brewer. But that respect doesn’t stop him from slapping the word kriek on the label. “I think protected and trademarked words…are a silly concept,” he says. 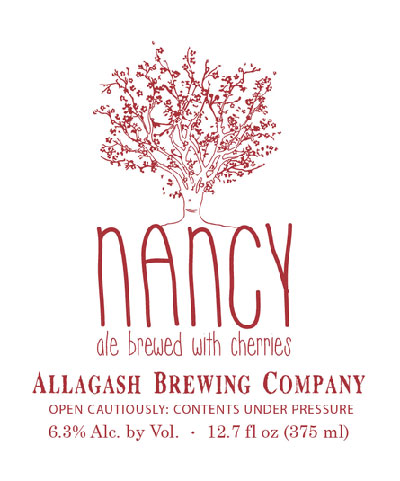 Belgian-influenced Allagash makes twin sour cherry beers. The primary difference between Nancy and Cerise (6.3 percent ABV and 8.1 percent ABV, respectively) is that the former is aged in stainless steel for nearly a year, while the latter is spontaneously fermented in an open-top vat called a coolship, and then matures in spent wine barrels for six months.

Both beers feature a blend of Maine-grown Balaton and Montmorency cherries, but Cerise receives around 50 percent more fresh juice at three pounds per gallon. Brewmaster Jason Perkins says the brewery avoids kriek in favor of the French word for cherry “out of respect for [Belgium’s] brewing tradition.”

Nancy and Cerise both pour a pinkish-orange hue and present ample funky cherry on the nose. Sipping Nancy conjures sweeter and more tropical flavors, while Cerise goes in a more dry, vinous direction. Given the nature of their fermentations, Nancy is released in early fall, while Cerise comes out when she’s good and ready. 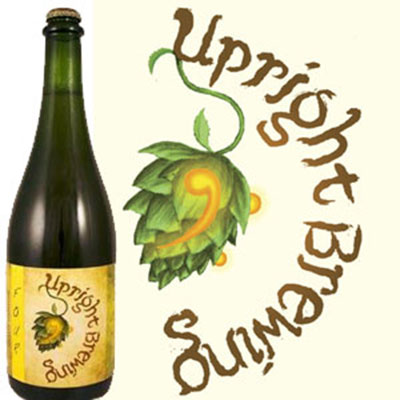 , Portland’s farmhouse-style yet basement-based brewery, makes no less than three krieks. Founder and brewmaster Alex Ganum buys his cherries from Baird Family Orchards, 30 miles away in the Willamette Valley.

The initial one, Four Play (5 percent ABV), begins as the brewery’s flagship wheat beer, which is named Four for its original gravity. The beer is then inoculated with Brettanomyces and Lactobacillus as it spends a year in oak casks alongside tart cherries. It is available year-round in the tasting room.

Hearts’ Beat, says Ganum, “pours intensely red and drinks with a huge tannic quality, showing bits of Brett lambicus and orchard yeasts,” but ultimately finishes clean. Shades, on the other hand, doesn’t appear cherry-colored, “but surprises with loads of Rainier character and more firm presence of Brett” with a funkier profile.

While crediting famed lambic brewers like Cantillon and Drei Fonteinen, Ganum also points to nearby Double Mountain Brewery as inspiration. 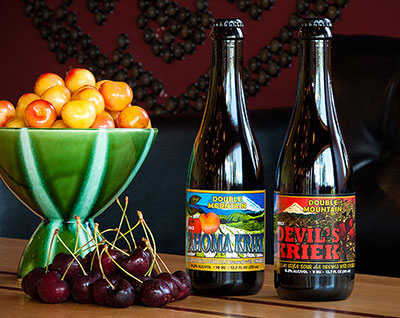 About an hour outside of Portland in the picturesque Columbia River Gorge, the town of Hood River is nestled between the river and the vineyards and orchards climbing Mt. Hood.  Double Mountain’s founder and brewmaster, Matt Swihart, picks fruit from his own cherry trees to create the brewery’s dual krieks.

Devil’s Kriek (9.3 percent ABV) is a Flanders Red base that pours a blood-orange hue from the addition of Bing and Van cherries. Tahoma Kriek (10.3 percent ABV), a strong Belgian-style blonde made with Rainiers, reveals the yellow cherries’ tone mixed with a bit of orange as well.

Swihart initially flirted with leaving brewing for winemaking, and planted grapevines before deciding to raise cherries and focus on sour beers. “Hood River should be a Lambic region,” he says. “We have the fruit, the breweries and the knowledge source. This should be a destination for that.” 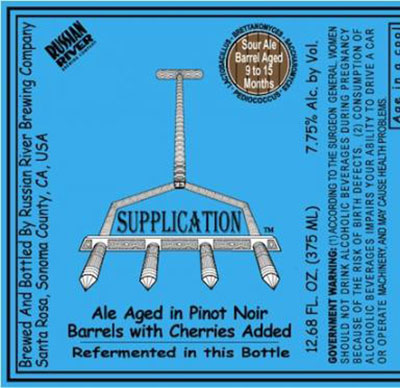 founder and brewmaster Vinnie Cilurzo doesn’t call Supplication a kriek, but he doesn’t back away from the comparison either. “The cherry character is certainly at the forefront,” he admits.

Santa Rosa is surrounded by grape vineyards, not cherry orchards, so Cilurzo uses dried cherries from Michigan. That’s also the key to having Supplication available year-round — if not always in 375-ml bottles, then at least on draft at the pub.

The brown, wild ale base is soured with the holy trinity of critters: Brettanomyces, Lactobacillus and Pediococcus. After receiving the sour cherries, the whole shebang ages in local Pinot Noir barrels for a year to allow the oak to balance out the acidity and funk of this 7 percent ABV sour ale.

“I thought it up and created the recipe,” says Cilurzo. “For the most part we’ve made no changes to the recipe from that first try. We hit exactly what I wanted to see in the first beer. It was probably the first time I envisioned a beer before making it and nailed it on the first try.” 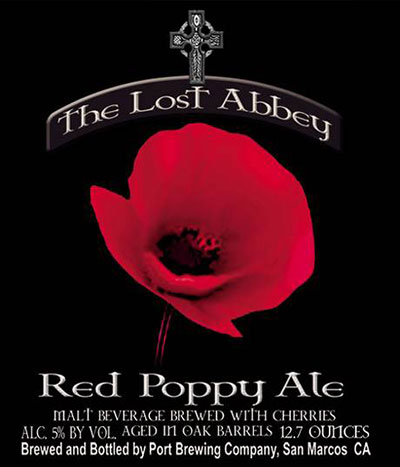 “Once upon a time, it was the most award winning Pizza Port beer of all time.”

That’s how The Lost Abbey website begins the story of Cuvee de Tomme, which won four medals in five years beginning in 2000. The base beer is Judgment Day, a potent 11-percent ABV Belgian-style quad made with candi sugar and raisins. To create Cuvee de Tomme, about 30 pounds of Montmorency cherries from Michigan are added to each of the bourbon barrels it’s aged in for at least a year.

Another Lost Abbey beer brewed in the Flanders tradition is Red Poppy, a reddish-brown sour ale that’s half as strong as Cuvee de Tomme, but perhaps twice as cherry-rific with subtle notes of baker’s chocolate swirled in. Cuvee de Tomme is released around December and Red Poppy tends to appear a month or two later, while they last. 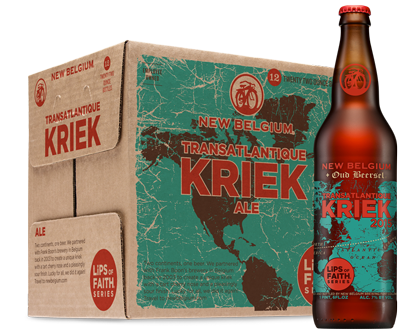 When New Belgium hired Peter Bouckaert from the Rodenbach Brewery, it gained more than the muscle and palate memory he developed from brewing Rodenbach’s legendary sour cherry beer, Alexander — it also gained access to his network of brewing friends from back in Belgium. Transatlantique Kriek began in 2003 as a collaboration with Frank Boon of Brouwerij Boon, and started a unique tradition of creating a blended beer from batches born an ocean apart.

For 2015, New Belgium sourced a two-year-old kriek lambic (made with 40 percent Polish Morello cherries) from Oud Beersels in Belgium’s Lambeek region. Once it arrived in Colorado, Bouckaert and company blended the oaked lambic with their own Belgian-style golden lager. The result delivers an 8-percent ABV ale with a tart wallop to complement the lambic’s vinegary kick.

As for the name, New Belgium takes its use of the traditional ‘kriek’ seriously and chose it only because this beer has Old Belgium credibility. “You cannot simply sour a beer and add cherries and call it a kriek, no more than you should dare disrespect the word ‘lambic’,” says wood cellar blender Lauren Salazar. “We use the word ‘kriek’ because actual Belgian kriek produced by a true lambic brewer is half of the beer.”