Andy’s Tips for the Perfect Kegerator

Fresh draft beer at home—is there anything better in the eyes of a craft beer enthusiast? Let’s face it: the dishwasher is never going to pour a perfectly-drawn glass of craft beer into that favorite glass of yours—it’s just not. And while a refrigerator full of buckling shelves always looks dangerously appealing, you can’t argue with the idea of draft beer always being within arm’s reach.

Serving kegs of commercial or homebrewed beer at home sounds like a perfect scenario. But a kegerator is like a puppy: you’re going to have to feed it, walk it and give it a bath.

Just kidding! But you get my point. Just like any consumer purchase, there are pros and cons that the buyer must take into consideration. Here are four things that are important to think about before welcoming a kegerator into your life.

Rather than get super technical on consumer purchase behavior, let’s keep this simple. We know you want a kegerator. But do you have space for one, and where will you put it?

A kegerator has to be at least as big as a keg, of course, so you’ll need about two to three square feet of floor space (more for a multi-keg system). Many kegerators have a draft tower on top that can bring the height up to around four feet, so keep that in mind when scouting for a spot.

Let’s say you’ve found space in the garage, basement or kitchen. Is it easily accessible? No one wants to be hauling a half-barrel keg up or downstairs, or maneuvering it around tight corners.

Tip For Tap: Make sure that the kegerator you purchase fits the space you choose for it. When we first added a kegerator to our office (pretty sweet, right?), the kegerator was not designed to be installed into an inline countertop. The result was that the vent fan was enclosed by the counter and couldn’t cool the fridge properly. Lesson learned, but not the easy way!

(FALL SEASONALS: The History Behind the Nostalgic Season for Beer) 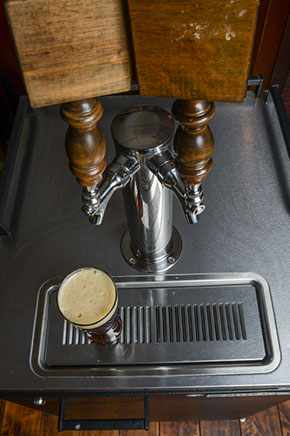 Once you’ve found a great place for your home draft system, next you’ll want to consider your options. Most of your decisions will depend on your budget and whether you want to purchase a prefabricated kegerator or plan on going with a do-it-yourself conversion kit.

Today, there are a number of companies that specialize in kegerators for commercial draft systems and the home bar. Kegerators can be freestanding or installed inline with an existing bar or counter. They even come in walk-in cooler versions—a guy can dream, right?

Going the pre-fab route may mean a higher initial investment, but you’ll save the time and energy of hacking into a standard fridge or freezer and using a conversion kit. I mean, some people just aren’t very comfortable with a Sawzall!

That said, some of you Sawz-all-the-time, and are comfortable with the potential dangers that come with partially dismantling or cutting holes in appliances. The opportunity to custom-build a kegerator or keezer that is totally unique might make it worth the challenge.

Tip for Tap: I currently have a refrigerator for my keg system, but I have not made any holes…yet. Someday I’ll get around to installing some faucets on the door, but until then, it works fine just the way it is.

I was only sort of kidding about a kegerator being like a puppy. Are you ready for the commitment? Some craft brewer worked way too hard on the beer in that keg for you to serve it as a foamy mess out of dirty beer lines at the wrong pressure.

It is recommended that draft beer lines be cleaned with a caustic cleaning agent every two weeks and cleaned with an acid to bust up any “beer stone” that may form every three months.

Fun fact: beer stone (calcium oxalate) is the same chemical compound that makes up a majority of kidney stones!

Line-cleaning and properly balancing your draft system is not that difficult. But if you want a freshly-poured IPA without the effort, you might be better off walking to the nearest bar.

Tip for Tap: Safety first and foremost. The chemicals used for cleaning beer lines are no joke! Be sure to wear the suggested protection when handling them—usually sturdy rubber gloves and protective eyewear.

Makes sense—we’re talking kegerators, so kegs are definitely going to come into play. The considerations for the keg part of your setup touch on each of the aforementioned sections:

While a kegerator is the ultimate beer-at-home status symbol, like most cool things, it requires some thought and continual upkeep. By taking all of these concepts into account, you’re helping to ensure that your kegerator will be enjoyed often, and will hopefully introduce others to the joys of home draft.