The original Samuel Adams brewery is located in a the Boston neighborhood of Jamaica Plain in the old Haffenreffer Brewery, which was the last operating brewery post Prohibition in Boston. Founder Jim Koch decided to buy the abandoned property, replace the collapsed roof, and direct the pigeons and vagrants who lived there elsewhere so he could start brewing craft beer within its confines again. The Sam Adams Brewery was renovated and opened for business in 1988.

The place has a historical and well-used feel about it. In exchange for a tour, Sam Adams asks for a $2 donation that is divvied up among three charities, including one that helps craft breweries called Samuel Adams Brewing the American Dream. Our tour guide was pretty hilarious. His best line was: “My homebrewed beer has the extensive aroma of student loans.” The tour group got to play with ingredients–mash up hops to release the lupulin oils and taste malt. We also stood in front of the Sam Adams giant copper brewing kettles (seen in their commercials) to learn about the brewing process.

The tour lasted about 30 minutes and was enough to work up a thirst. Our tour guide led us to a tasting room, complete with a Sam Adams neon sign over the bar. We were treated to three different Sam Adams beers: their flagship Boston Lager (amber lager); their seasonal OctoberFest (German-style Marzen/Oktoberfest); and a delicious beer not yet out on the market, a fruit Berliner Weisse. 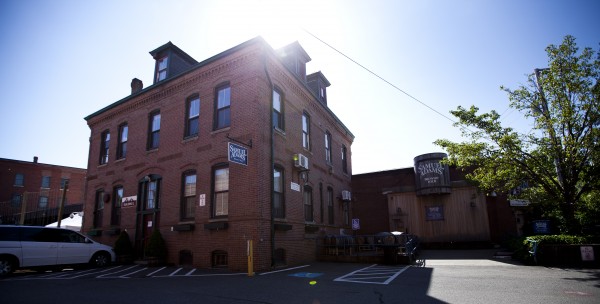 According to Jennifer Glanville, Brewer, and Director of Brewery Programs, the experimental beer was a Longshot American Homebrew Contest winner. It was created on a 10-gallon nano-brewery that has had a hand in several Sam Adams favorites that started out as experimental beers. These include Rebel IPA, a West Coast-style IPA, and a series of new brews to be released in early 2016 include a Nitro White Ale, a Nitro Coffee Stout and a Nitro IPA.

We all got to keep our tasting glasses, and our tour guide held up a curvy Sam Adams Boston Lager Pint Glass. Introduced in 2007, the glass has several unique features designed to enhance the beer drinking experience. For example, a laser etching on the bottom called a nucleation site, which causes bubbles to release flavors and aromas. It’s available in the brewery gift shop. But, we were told that if we visited Doyle’s Pub, one of Sam Adams first on-tap accounts, we could pay for a Sam Adams draft, exchange our tour pass (an unglued Sam Adams beer label) and take the glass home with us. Of course, we headed to the pub.

Doyle’s Pub, a Boston institution founded in 1882, is less than a mile away. I love that Sam Adams remembers one of their first customers with a mention of them on the tour. Doyle’s Pub, where the linoleum has been worn through to the original floorboards around the bar from almost 150 years of being in business, returns the love. It runs a shuttle between their location and the brewery so that, in Glanville’s words “…drinkers can enjoy some great food and beer after they tour the brewery.”

And what about my special Samuel Adams Boston Lager Glass? Maybe it’s just my imagination, but all the craft beer I drink tastes better in that glass.