Repeatedly Under Threat, California Wildfires Force Craft Breweries to Plan for the Worst

California has nearly 850 craft breweries, but ferocious wildfires and the aftermath are affecting the business of brewing beer.

The impacts of wildfire on California’s breweries are numerous. These businesses face immediate threats like property and product damage, reduced tourism, and the inability to deliver beer to bars, restaurants and retail customers. Longer-term impacts include costly increases in utility expenses, insurance, and preventative equipment. These threats create difficult operational challenges for small and independent craft breweries.

According to the California Department of Forestry and Fire Prevention, more than 3 million acres burned over three years, at least 150 people died, and more than 35,000 structures were damaged or destroyed.

Seven of the most destructive California wildfires on record occurred in the 13-month period between October 2017 to November 2018 — this includes the Camp Fire, the state’s deadliest on record (the same fire that deeply impacted Sierra Nevada Brewing’s community, sparking Resilience IPA).

In 2019, the Kincade Fire burned more than 77,000 acres in Sonoma County; Saint Florian’s Brewery, named for the patron saint of firefighting and co-owned by a firefighter, remains closed because of damage.

According to CalFire, the three-year cost to the state of California for the suppression of those wildfires was an estimated $1.49 billion. The damage to California’s economy is much higher–AccuWeather estimates it to be over $665 billion.

Those are big numbers, and it can be hard to envision how they impact individual communities and businesses. For Jack Dyer, co-founder of Topa Topa Brewing Company based in Ventura, California, it was the Thomas Fire that changed the brewery’s approach to business.

“What some folks didn’t realize is that the Thomas Fire burned for over a month, so it was a prolonged event, made worse by the mudslides in Montecito,” Jack says. “The first night of the Thomas Fire, it came into Ventura hard and fast. I got to the brewery very early that morning, and the town of Ventura was chaotic. I watched as homes and apartment buildings on the hillsides went up in flames.”

“I watched as homes and apartment buildings on the hillsides went up in flames.” Jack Dyer, Topa Topa Brewing Co.

At one point, the brewery in Ventura and taprooms in Santa Barbara and Ojai were all endangered simultaneously.

“As the fire burned on towards Ojai and then SB [Santa Barbara], we kinda had a strategy in place of how to deal with things logistics-wise, but it was a tough time as a business owner, feeling for all of our employees’ safety as well as our customers,” he explains.

The fiscal impact of the Thomas Fire for Topa Topa Brewing Company was an estimated $150,000 in lost revenue, from losses at the taproom to road closures impacting distribution.

The risk of power outages is among the most direct wildfire impacts a brewery faces. Loss of power during the brewing process potentially forces breweries to dump batches of beer, rendering them unable to meet sales orders.

No utility company has received more ire for its reaction to recent wildfires than Pacific Gas and Electric (PG&E). In 2019 the company implemented a policy of Public Safety Power Shut-offs (PSPS). According to PG&E, a power shut-off can be triggered by multiple weather factors including low humidity levels and high winds, a potent combination that fuels wildfires.

PG&E’s power shut-offs had a major impact on Russian River Brewing in 2019. The Kincade Fire came within one mile of its new Windsor, California, brewery location, in the heart of the evacuation area. The brewery spent eight days non-operational and lost an estimated $340,000 in revenue.

Additional power shut-off alerts after the Kincaide Fire required the use of a generator to keep the brewery operational. Generator rental costs to operate a brewery of their size grew into the tens of thousands of dollars, and inspired the brewery to consider purchasing their own expensive generator system in 2020. Co-owner Natalie Cilurzo says the cost would be difficult to manage but says, “I don’t believe we have a choice.”

Topa Topa Brewing Co. is looking into adding solar panels and back-up batteries to the tasting room and brewery locations, in part, because of the wildfire impacts they saw at Russian River. The brewery’s newest tasting room was designed with the addition of solar power and solar panels already in mind.

“We can and will do more to stay energy independent, and have plans to add solar to our roof here in Ventura to help us deal with extended power outages related to climate change,” Jack Dyer says.

The brewery has also joined Clean Power Alliance, a new energy provider in Los Angeles and Ventura Counties providing renewable green energy. They have already seen increases in utility costs as those companies are forced to offset the expense of fire suppression and prevention, but by joining this alliance they will be supporting efforts for stable, long-term renewable energy development, and a reduction in current energy greenhouse gas emissions.

Sierra Nevada Brewing Company in Chico has been on the forefront of implementing sustainable brewing practices in its efforts to achieve energy independence, prevent operational interruptions that might cause lost batches, and also create less strain on the energy grid.

As far back as 2006, the brewery was one of the original business partners in PG&E’s ClimateSmart and Biogas recovery program. Sierra Nevada uses equipment to capture the methane output of its operation which is then blended with natural gas, and reintroduced as energy to be used by the brewery. The brewery has a similar recovery with 100 percent of the CO2 emissions and relies extensively on solar power.

Preparation is the Best Defense

Sierra Nevada Brewing Co. is the third most-advanced producing craft brewery in the United States and the brewery’s success has afforded it opportunities to invest in state-of-the-art sustainability equipment. But for smaller breweries, asking tough questions about their current state of readiness can help them mitigate and prepare for the impacts of future wildfires. California craft brewery owners who’ve already been forced to confront wildfire events strongly recommend preparing for emergency situations now.

“Failing to plan is planning for failure,” says Topa Topa’s Jack Dyer. “Putting a solid plan in place to deal with natural disasters if and when they happen is critical for doing business here in California.”

“Be prepared for power outages via backup sources like batteries, solar, and generators that are large enough to ensure there is no loss of product and which allows you to continue brewing,” she says. “Make sure you have a good insurance policy in place that covers things like business interruption for lost revenue even if there is no fire damage. Practice emergency evacuation drills with your staff and have SOPs to follow in the event of a power outage or an emergency. Plan for the worst-case scenario and everything in between.”

In 2020, California breweries of all sizes are beginning to incorporate natural disaster planning into their operations. New technologies in sustainability are helping companies and the State of California prepare, but having a plan for emergencies appears to be the first step for breweries and all businesses confronting the reality of potential wildfire impact. 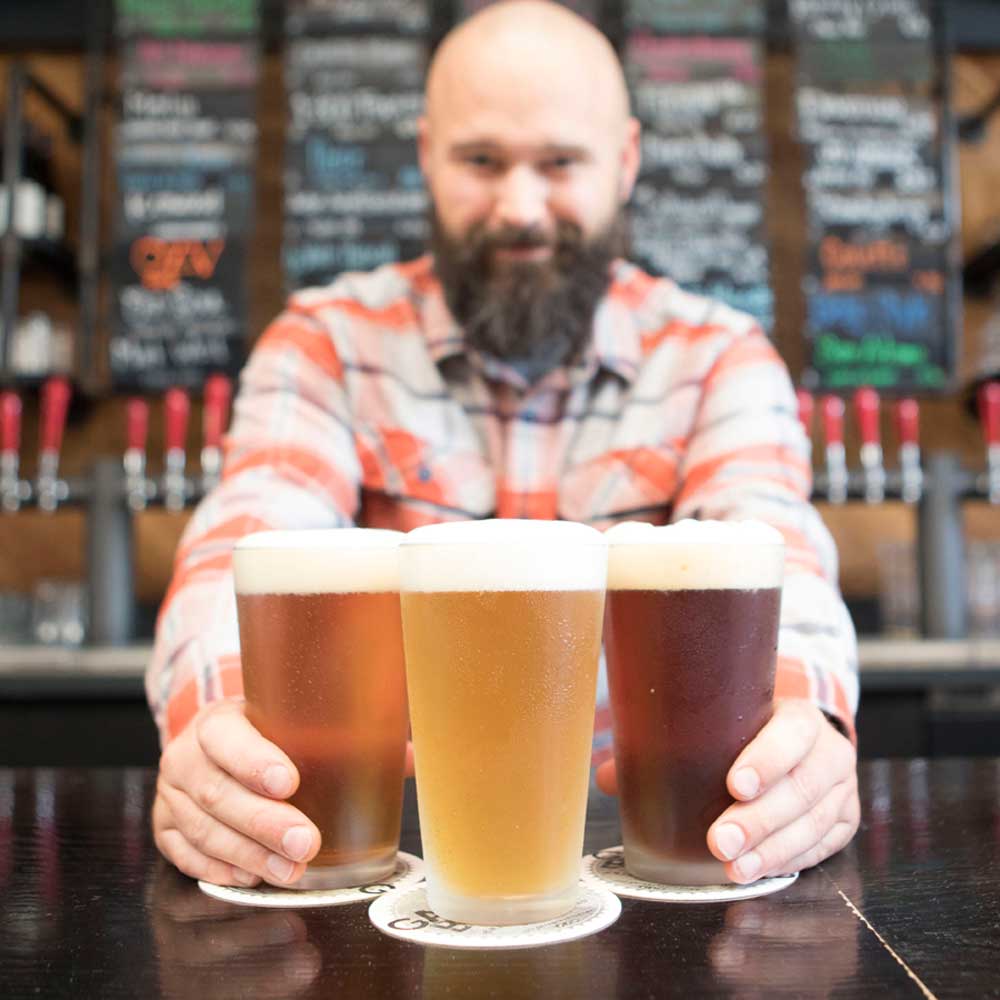 Ryan Woldt is a food and beverage management consultant, writer and entrepreneur based in Southern California. His first craft beer was a New Glarus Spotted Cow at “John’s Bar” in Columbus, Wisconsin. It changed the trajectory of his life and career. If you see him there is a 100% chance he has a notebook and pen on him somewhere.