Pumpkin beers can be an oddly divisive topic. Maybe it’s because some end up on shelves when you’re still sweating in the summer heat. Or maybe it’s because you simply don’t like pumpkin — and you definitely don’t want those flavors wafting from your pint glass.

Maybe you’re part of the crowd that’s cool with pumpkin beers, but you’re more impressed when you find one that puts an unexpected spin on a traditional favorite. Fall 2017 is producing some offbeat pumpkin beers that go beyond the standard pumpkin ale. Here are a few of the imaginative ones you can seek out this fall.

Columbus’ Wolf’s Ridge Brewing brews this fall seasonal with Ohio-grown pumpkins, cinnamon, nutmeg, ginger, ancho chiles and vanilla to create their base pumpkin ale “Pi.” Then, they infuse the ale with roasted coffee from Columbus’ One Line Coffee. This year Wolf’s Ridge is making kegs of #DAVEDOESNTKNOW and bottling a bourbon barrel aged version.

“Dave made mention of how much he disliked pumpkin flavored things — and especially pumpkin flavored coffee,” Chris says. “Of course I decided to secretly infuse his coffee into my pumpkin ale. At the event, we unveiled the beer to Dave. He was surprised at how well it turned out and said he ‘doesn’t hate it,’ which was a compliment.”

Rumpkin has been part of Avery’s fall seasonal releases since 2011, when it kicked off the brewery’s annual barrel series. This big pumpkin ale is aged in fresh rum barrels, which adds oak and candied molasses flavors, for a big, bold taste. The ABV changes each year, but it’s never subtle, always falling somewhere between 15-18% ABV. 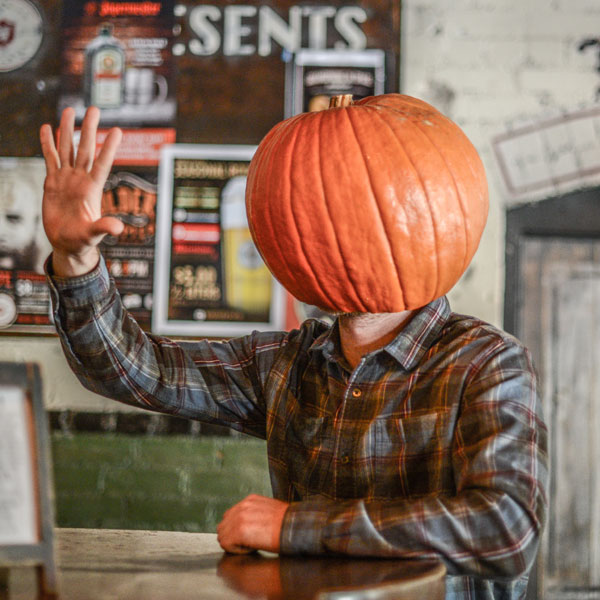 Wasatch Brewing’s Pumpkin Nitro is a malty amber ale with a hint of pumpkin. The twist here is Wasatch puts it on nitro, which adds a creaminess they say “tastes like pumpkin pie with whip cream to top it off.” If you like pumpkin beers, then this is a must try. Pumpkin lovers can also check out Black O’ Lantern, Wasatch’s pumpkin stout.

Fluffy Pumpkin has a rich chocolatey porter base with toasted marshmallow and pumpkin essence. This is the fifth year Odyssey is releasing this fall seasonal.

Co-founder Chris Hill says Fluffy Pumpkin is “the little beer that could.” Originally they’d planned it as a one-off to “appease our ardent fans who were clamoring for a seasonal pumpkin beer.” Several area beer bar owners and influencers were at release day, who all demanded kegs of their own.

“Being a new brewery, and being keen on new sales, we brewed a larger batch to supply four 1/2 barrel kegs to those establishments,” Chris tells CraftBeer.com. “Those four kegs garnered enough positive response for Odyssey to brew a full, 15 barrel batch the following fall season. Every drop that wasn’t allocated to the tap room was sold before it left the fermenters. We had a hit on our hands.”

(READ: The New England Style IPA is the Anti-IPA)

Isle of MaGourdo is a 5.5% amber ale brewed with a blend of pumpkin pie spices. Due South says this amber ale has enough malt backbone to stand up to the sweetness of the pumpkin pie spices, so you still feel like you’re drinking a beer — even if the aromas remind you of the pies your grandma used to make.

If you’re looking for a little sweet and a little heat, you’ve come to the right place. New Belgium Brewing is adding Atomic Pumpkin Ale to its lineup this fall. Brewed with Saigon cinnamon and Habanero peppers, Atomic Pumpkin Ale starts out sweet and finishes spicy with a little bitterness in between.

“Atomic Pumpkin is a twist on pumpkin ale for beer drinkers who like some heat,” explains New Belgium’s Bryan Simpson. “Classic fall flavors like pumpkin pie and cinnamon offer a sweet counterpart to the fiery peppers.”

Lewes, Delaware’s Crooked Hammock brewing is typically known for its breezy beers to fit the beachside lifestyle. But this fall, the brewery is starting a series called the Dark Side of Hammock, and one of its first offerings is Jav-O-Lantern, a smoked pumpkin ale.

The brewers smoked fresh pumpkin for several hours in a smoker, then added it during the mash process. They also added dark roasted coffee and pumpkin spices throughout the brewing and fermentation process.

Sour Pumpkin Ale is a new release from Asheville’s Hi-Wire Brewing. All the vegetables and additives were sourced from Asheville’s Rayburn Farm, including the pumpkins, cinnamon basil and blue ginger. After a 10-month fermentation, brewers bottled Sour Pumpkin Ale, and it’ll be available in early September at the brewery’s South Slope location. You can find a few bottles in their distribution area, too.